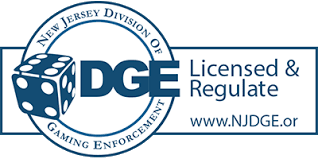 New Jersey is one of the leading markets for online casino gambling in the United States. The industry was officially recognised in 2013 when Atlantic City fully legalised the operations of online sportsbooks and mobile casinos. Subsequently, the state now has seven iGaming license holders and over twenty-four connected online casino brands. By the end of 2021, online gambling contributed over US$1.4 billion in revenue to the New Jersey economy.

To take part in online gambling in New Jersey, you must be aged 21 or over and physically present in New Jersey when betting. However, unlike some states, you do not need to be a New Jersey resident. You can also set up an account from anywhere in the U.S., although you cannot play for real money.

The online casinos listed below are the only ones that are currently licensed and legal in New Jersey:

Prior to the early 2010s, participation in online gambling activities was illegal for residents of New Jersey. This was due to the passing of The Unlawful Internet Gambling Enforcement Act in 2006. As a result, most players resorted to offshore casinos operators.

However, the first sign of a regulatory turnaround came in 2010 when New Jersey legislators proposed a bill legalising online gambling in the state. Although the proposed bill met with several vetoes from the Governor, it eventually became law in February 2013. Since then, the New Jersey Division of Gaming Enforcement has granted licenses to online casino operators and regulated their activities.

Below is a timeline of some key events leading up to the legalisation of online gambling in  New Jersey.

In February 2013, New Jersey became the third U.S. state to legalize online gambling. The change in the law followed a three year tussle between Senator Raymond Lesniak and Governor Chris Christie. Lesniak first proposed legalizing online gambling in New Jersey in January 2010 as a way to help the Atlantic City economy recover from the Great Recession of 2007 – the city’s casino revenue had been falling steadily since 2006.

Despite the bill being overwhelmingly voted for in the New Jersey Senate, Governor Christie vetoed it twice. His first veto, in 2011, was he claimed due to concerns that the bill had the potential to allow gambling to expand beyond Atlantic City – the only part of New Jersey where gambling is legal.

In reply, Lesniak claimed that Gov. Christie instead was influenced by Nevada-based Caesars Entertainment, who own and/or operate three casinos in Atlantic City: Caesars, Bally’s and Harrah’s.

Although Caesars had spent millions of dollars lobbying Washington to legalize online gambling, Lesniak felt that they wanted a federal solution to online gambling in which they could be a major player. According to Lesniak they didn’t want New Jersey stealing their thunder.

Lesniak also claimed that Caesars donating millions of dollars to Christie’s election campaign helped them to get the Governor on their side in opposing the bill.

Undeterred, Lesniak returned in 2012 with an amended bill. Again the bill passed through the Senate without a hitch and again Christie chose to veto. This time however, Christie’s veto was conditional. He had also recently signed a bill legalizing sports betting in New Jersey. He would support the bill if it was limited to a 10-year trial period and if the tax on casino’s income was increased to 15% from the proposed 10%.

The conditions were met and online gambling in New Jersey was legalized on February 26 2013.

Within a month of the launch, 100,000 people had signed up for accounts. As of 2019, there are 17 online casinos in New Jersey operated by 6 casino companies – including Caesars.

New Jersey has one of, if not the, longest history of gambling in the United States: Freehold Raceway in Freehold Borough is America’s oldest racetrack with horse-racing having taken place there in some form since the 1830s.

Despite its early relaxed approach to gambling, a law-change in 1894 and a public vote in 1897 led to all gambling in New Jersey being officially banned. Yet, much like prohibition, this didn’t stop gambling.

In fact, Atlantic City was ‘The World’s Playground’ by a certain Enoch ‘Nucky’ Johnson. Johnson was at various times the Sheriff and Treasurer of Atlantic County. He was also a racketeer and was eventually sent to jail, Al Capone-style, for tax impropriety. Presiding over Atlantic City at the height of prohibition and the New Jersey gambling ban, he famously said:

“We have whisky, wine, women, song and slot machines. I won’t deny it and I won’t apologize for it.”

Between 1939 and the early 1970s, the authorities gradually relaxed the ban. First horse-racing was re-legalized, followed by charitable gambling and amusement arcade games. Finally in 1970 another referendum allowed the creation of the New Jersey Lottery.

In keeping with their track-record of being gambling pioneers, in 1975 New Jersey became the first American state to allow lottery players to pick their own numbers.

By the late 1960s Atlantic City, once the ‘World’s Playground’, was in decline. If once-packed hotels weren’t bulldozed, they were shut down or converted into flats and nursing homes.

Some believed that casinos were the answer but, perhaps fearing a return to the mob-style racketeering of the Johnson era, a 1974 referendum rejected legalizing casino gambling across the whole of New Jersey by 60%-40%.

Undeterred, those who felt casinos could help rebuild Atlantic City kept pushing. In 1976, an amended referendum – supported by the Atlantic City press – narrowly won the case for legalizing casinos in Atlantic City only.

A building boom began as more and more casinos opened. By 1988 Atlantic City casinos had larger annual revenues than those on the Las Vegas Strip.

In 2006, Atlantic City casinos hit all-time revenue high of $5.2 billion. However, the Great Recession of the following year and the opening of casinos in Pennsylvania helped to contribute to what would become a decade-long slump in revenue. It wasn’t until 2016 that takings would rise again. That same year, online gambling in New Jersey rose by 32%.

Two main bodies oversee gambling in New Jersey. The main one is the New Jersey Division of Gaming Enforcement (referred to in New Jersey as simply the DGE). Created in 1977, the DGE regulates legalized casinos in Atlantic City. The DGE oversee casinos and also have a subdivision, Technical Services Bureau (TSB) which enforce laws regarding electronic gaming equipment.

The responsibility for regulating Atlantic City casinos falls on both the DGE and the NJ Casino Control Commission (CCC). The two agencies belong to different state departments and it’s the CCC which licences casino gambling in New Jersey, often acting on recommendations from the DGE.

In addition to this, casinos also have to pay 2.5% to the Casino Reinvestment Development Authority (CRDA). The CRDA came into being in 1984 to help reinvest casino profits into regeneration projects, such as housing, across New Jersey.

New Jersey residents who feel they have developed a gambling problem can contact the Council on Compulsive Gambling of New Jersey. Launched in 1983, during Atlantic City’s casino boom years, the Council is a private non-profit organization that offers help, education and resources to both gambling addicts and any organizations that require it.

The DGE also run a New Jersey Casino Gambling Self-Exclusion Program. You can find out more information by speaking to their offices in either Atlantic City or Trenton.

Bonuses are a common feature at casinos globally and the top New Jersey gambling sites are no exception. There are several other different types of promotional rewards up for grabs at the best online casinos NJ, too.

Below are some of the most popular bonuses available at casinos in the Garden State.

Matched bonuses are promotional rewards issued when depositing specific amounts into a player’s casino account. Leading gambling sites in New Jersey offer this bonus as a percentage return of your deposit amount.

This offer may differ across casinos with some brands offering 100% matched rewards to equal the deposit amount. On the flip side, some sites allow you to claim double or even triple your deposit sum. Matched bonuses usually come with deposit limits, indicating the maximum reward sum available irrespective of your payment amount.

As you can tell from the name, this promotional offer applies to players without the need to make real money deposits to the casino. Both new and existing players can receive no deposit bonuses where available. Most commonly, this is a free spins offer. But you can occasionally find casino credits in a lump sum.

While you can use this promotional offer to play table games and slots at your preferred casino, it is impossible to withdraw no deposit cash rewards. You’ll first need to clear the bonus, following the terms and conditions of the offer. To find no deposit bonuses, check out the promotional newsletters from casino brands or visit our page on this site.

New Jersey online casinos have an abundant supply of slot games. So naturally, there is a corresponding amount of bonus available for customers to enjoy video slots. Free spins are special promotional offers that allow clients to play a specific number of slot rounds.

Unlike most bonuses that allow players to choose their preferred games, free spins are restricted to games stipulated by the casino. However, you can rest assured that the best NJ gambling sites offer their free spins bonuses on games with player-friendly RTPs and payouts.

How to Join an Online Casino in NJ

By following an easy four-step method, you can join thousands of players who experience fun-filled and financially rewarding online gambling in New Jersey. Below is the procedure to join, deposit and play games at any of our top-rated casino sites in NJ.

To begin with, choose from one of the numerous gambling sites listed on our New Jersey casinos page. Once you’ve decided, simply visit the casino’s official website. Importantly, we advise clicking on the link provided on this page to avoid landing at a spoof site.

All of our recommended casinos require new clients to register on their platform. Thankfully, the process is simple and can be completed within a few minutes. Simply input your personal details as requested and verify your identity through any government-issued ID.

After signing up, it is important to make your first deposit at the casino. Many sites have a minimum deposit amount. If so, you must pay exactly or above that specific amount. Your first deposit also qualifies for interesting welcome bonus packages, including free spins and deposit match offers.

With deposits and bonus cash rewards, you can browse through the casino’s game catalogue to finally start playing. There are thousands of slots, table games and live dealers available for you. Good luck and please remember to gamble responsibly.

New Jersey has built a reputation as one of the most prominent states in the US for online gambling activities. Unlike several other states in the country, online casinos in NJ are fully legal and have licenses to operate. In addition, there are countless offshore sites which are also safe and secure.

You can join one of the best online casinos in New Jersey today to play games for real money. Also, there are interesting bonus offers, modern software and a secure gambling environment to make your experience worthwhile.

A Lucky Player Nailed the Largest Regulated US Online Slot Win Ever
December 28, 2021