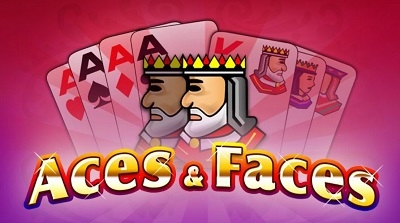 One of the most popular non-wild video poker games is Aces and Faces. This is one of the higher volatility options with payouts that are scaled up with an atypical pay table that awards special hands with better prizes than usual to create an experience based around a tremendous amount of action.

An Introduction to Aces and Faces Video Poker

The online video poker genre is primarily broken up into two parts. These are the wild and non-wild types of games. On the non-wild side, the games typically have a volatility and variance that are fairly close to each other, but Aces and Faces video poker breaks out of the pack on this point.

Your chances of getting bigger payouts is increased at the expense of smaller payouts for certain lower-tier hands, which creates a higher volatility in the game overall.

If you’re the type of player who wants something more exciting than the usual non-wild options, but you don’t want to spend tons of extra time learning how to play wild card-based games with their much higher level of difficulty and strategic depth, then this title is a good option that can satisfy what you’re looking for.

Comparison to Jacks or Better

All non-wild card video poker titles are compared to Jacks or Better since it’s the genesis of the sub-genre. There are a few ways to make this comparison, including everything from strategy to payout structure.

The strategies involved aren’t that much more complicated, and the main risk is that players will overcompensate and change too much, which is a common temptation. In terms of payouts, the big difference is that value is moved up the pay table from the full house/flush payouts to the four of a kind payouts.

The results of what would otherwise be a small change is actually pretty severe in this particular title, and that’s because of the issue of hand frequency. You’ll get flush and straight draws much more often than you’ll have opportunities to make four of a kind, so it’ll affect more hands in a negative way than position. However, when it does affect you in a positive way, it’s a really big difference that makes up for the small disadvantages you took with flushes and straights along the way.

The overall result is a higher level of volatility, which lends itself to more opportunities to hit short winning streaks that boost your results very quickly.

An important facet of Aces and Faces is that there are two pay tables that are the most popular. They have similar but different distributions, and one online casino may have one while one has the other.

The good news is that they are very similar, and we’re going to break down both of them in the same chart down below, but it’s critical to know because there are some games that will try to trick you into taking a pay table that’s different than the two best ones.

Here we’ll show you the way you can tell the pay tables apart and what you can expect in terms of payout rates in each of these top versions of the game.

Assuming that you play with five coins, the following are the payouts for this game.

The 8/5 version of this game has a top payout of about 99.3 percent, and it’s just slightly less at 99.2 percent for the 7/6 version. Either of them are completely playable.

Also note that you will always have your five cards evaluated to give you the best payout available, so you don’t have to worry about declaring your own hand rankings.

The procedure for playing this game is pretty straightforward. It’s to the point that you can show a new player how it goes two or three times, and they will understand exactly how it works and will be able to play on their own.

Once you get the hang of things, this isn’t a very complicated game in terms of gameplay procedure. Instead, the complications come in the form of strategy.

While we have a more detailed breakdown of Aces and Faces Video Poker Strategy, that’s not what all players are looking for, so we’ll give some quick pointers here.

First off, always bet with five coins. Even if you have to lower your coin size to fit a total bet that you’re comfortable with, you’ll get a lower house advantage with five coins than one through four because of the increased proportional royal flush payout.

Second, remember what you’re trying to do in this game. You’re looking for the combination of discards (or lack thereof) that will give you the best average payout. You can usually narrow this down intuitively to just one option, but sometimes there are two or three viable ways to play a hand. When that happens, using more advanced strategies like what we linked to a couple of paragraphs above are what will guide you in the right direction.

Why Aces and Faces Video Poker is Important

It’s critical to understand that there’s this big misconception that all non-wild video poker games are alike. Nothing could be further from the truth. In reality, there are some serious differences, and those differences are what fill out the overall game portfolio of a casino or software developer.

In turn, this is what allows different types of players to find the best types of games for them as an individual instead of feeling like they’re being pushed into a box that doesn’t fit them very well.

There is a non-trivial portion of players who hold Aces and Faces as one of their favorite video poker games. The higher-end payouts and chances to hit more winning streaks due to the pay table distribution is one of the biggest reasons why. The relatively straightforward strategies compared to wild card games is also noteworthy.

Which online casinos have Aces and Faces Video Poker?