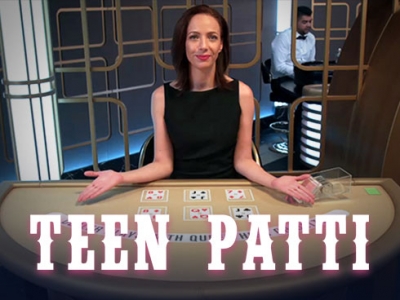 Teen Patti live dealer games bring you closer to the action than you can get in any other way. With bonus payouts through side bets and classic action, this is definitely the best way to play online with live dealers and other players you can chat with while you cheer each other on.

An Introduction to Teen Patti Live

The live version of Teen Patti is the best way to play online. This is a classic game that includes the right mix of skill and luck for a lot of players. What’s really awesome is that you don’t have to be some kind of math genius to learn to play the game really well either.

As a result, this is a very accessible game for players no matter where you’re located or how much time you have available to dedicate to strategy.

The multiple betting options and the social factor of playing in the live environment come together to form up a gameplay experience that you can’t really match in any other way. On top of that, you get all of the advantages of playing in a live casino with none of the disadvantages, which only adds to the overall effect.

In the following, we’ll break down the gameplay procedure, hand rankings and rule set for Teen Patti live dealer tables. Make sure that you know exactly how this game runs before you hop in so that you don’t hold up the other players at the table who can end up waiting on you for a bit if you slow the game down.

The standard procedure for the game goes as follows. It’s really straightforward for live dealer casino games like this one and is not at all like the multi-player version that involves people heading off against each other. Instead, you’re only facing off against the dealer.

If you’re familiar with the game Three Card Poker, then you’ll notice that this title is very similar with different hand rankings and many extra side bets.

The hand rankings for live dealer Teen Patti are as follows, starting from the best possible hand and going downward:

Something worth pointing out with this pay table is that you do not have to declare your own hand ranking when playing at Teen Patti live tables. That will be done automatically, and you will be given the highest-ranking hands that you can make with your three cards.

We’re going to quickly look over the most popular side bets for this game. Depending on where you’re playing, additional side bets may or may not be available.

With the Pairplus side bet, the dealer’s hand is completely irrelevant, and you are scored on a pay table based on your own cards only. The pay table breaks down a bit differently than the usual hand ranking, and it looks like the following:

The payouts can vary slightly on some of the higher-ranking hands for this side bet, and again, it depends on where you’re playing to some degree. However, this is the most popular pay table that you’ll see, and the Pairplus awards will rarely deviate from the above in any significant way.

The 6 Card Bonus incorporates the cards from both the player’s hand and the dealer’s hand for an atypical type of special side bet.

The best possible five-card poker hand is determined from the six cards that are shared between you and the dealer (three from each), which is then compared to a pay table for potential payouts.

Once again, there can be some degree of variation between different casinos, but the most common pay table for the 6 Card Bonus side bet is as follows.

This is a fairly generous side bet in that it allows for some pretty serious top payouts, and it uses six cards instead of five while using five-card poker hand rankings for payouts, which makes it easier to win than you might initially think.

This can be confusing to some players who aren’t familiar with how high card hands work, so here’s a way to remember it:

You don’t need to go through this logic every time, but following it through once or twice will help you to understand how these hand rankings work for high card hands.

Live dealer Teen Patti gives a great mix of action between the social activity between players and the dealer as well as the strategic play that gives you something to think about without unnecessary complications. With side bets that offer even more action, it’s hard to ask for more in a live dealer table game experience.