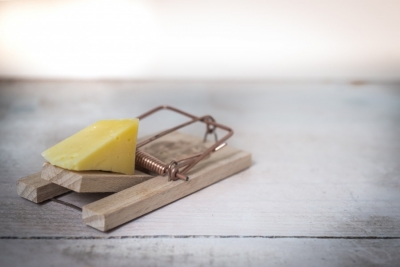 There are a variety of traps that players can fall into when they play at online casinos. This can involve everything from betting decisions to making blunders with their bonuses and promotions. We’re going to look at some of the most common of these traps and what you can do to make sure that you avoid them.

Every single person reading this knows the feeling of falling into some kind of mistake and immediately having your stomach drop in a way that tells you something very specific: You feel like you should have seen this coming.

It’s a bit unfair to yourself to expect that you’ll see every possible mistake, and there are plenty that you’ll often have to wander into yourself before you really learn to avoid them.

However, you can avoid a lot of the headache and even monetary loss if you learn from the mistakes of others instead of needing to make those same mistakes yourself.

We’re going to look at some of the biggest traps that happen the most often in the online casino industry. Simply being aware of these potential problems is often enough to catch them before they become an issue, but even if it’s not for some of these, then you’ll at least be able to catch them earlier than you otherwise would and mitigate any potential damage as much as possible.

Trap #1: Betting Opposite Sides in Roulette

Most players end up getting in on the action with roulette at some point, even if it’s not their favorite title. It’s one of the most popular table games of all time, so it’s easy to understand why that is.

Unfortunately, a whole lot of players also fall into a trap that centers around betting on opposite sides, often by mistake. By opposite sides, we mean two bets that cover a significant portion of the board but that cannot both win at the same time. A good example of this would be mixing black and red wagers, and another would be mixing three 2:1 row bets.

The reason that this is a trap is that it turns the game into a situation where you’re pushing most of the time but losing the rest of the time with no chance to turn a profit on those wagers that are opposite to each other.

Instead, if you want to make multiple types of bets on the same turn, then you should make sets of wagers that “intersect” instead of running “parallel” to each other. For example, playing with red and even or 1-18 and black are much better options because they don’t put you in that trap.

Something that a lot of players do when they get a bonus is jump right into playing without really paying much attention to the terms and conditions of the promotion itself.

Unfortunately, this often means that they have to forfeit their bonus money before they can really even get started.

If you run outside of the terms and conditions of a bonus, then the casino will remove it from your account, and you usually won’t be able to reclaim it on another deposit. This is clearly taking money out of your pocket overall, so you should make sure that you pay attention to these policies.

The one term that players mess up on the most is the list of game restrictions. The way this works is that there will be certain games that you aren’t allowed to play until you have cleared the play-through requirements for the bonus. Not all casino sites have these restrictions in this way, but many of them do, and it’s the very first thing that you should look for when you’re deciding on a bonus to play with.

The reason it’s the most important thing to look at first is that you want to make sure that you can play the types of games you want to play with the given promotion. Otherwise, it’s a waste of your time.

Problem gambling is a serious issue, and if you have issues with compulsive gambling, then you should seek help through the many resources that are made available.

Whether you have these types of issues or not, one trap that’s easy to fall into is not keeping track of the deposits that you have made at a casino. The reason that this is such a trap is that we don’t really have as good of a level of recall as we like to think we do, especially if it’s something fairly mundane.

It’s not fair on us to expect ourselves to remember these things correctly 100 percent of the time. However, if we mess up on this particular point, then it can have some very serious consequences for our financial lives. This means it’s worth it to do a little bit of record-keeping to keep things straight.

All you need is a simple spreadsheet or text document where you list out the date, amount and casino name of when you make your deposits. That’s it. It also gives you the benefit of having something concrete to look back on that you control so that you can see how much you’re actually spending over a period of time.

Trap #4: Almost Anything on Craps Other Than Pass Line

It’s very intimidating to walk up to a craps table in person that’s surrounded by excited players if you don’t know how to play. In the online environment, it can be much easier to just hop in and get started to try to figure it out as you go, but that’s particularly dangerous in craps in a certain way.

The reason for this is that a majority of the different types of wagers on a craps table are traps themselves with a massive house advantage.

You can hop into most types of games, especially titles like slots, without knowing much and be able to be just fine. However, in craps, you really need to understand a very basic level of strategy (spoiler alert: play the pass line bet) to avoid accidentally having a house advantage in the range of 10 to 20 percent, which is among the worst bets that you’ll find in virtually any online casino.

On the same theme of being eager to hop right into a new game and get started playing, many people make a deposit and then want to get started without planning much ahead of time. This includes not considering how they want to manage their money or what managing their money really looks like for them.

Bankroll management is something that a majority of players completely ignore, but that’s a trap. Instead, you want to have a general idea of what size of wagers you want to make in the games you play so that you can make your bankroll stretch out over the long run.

This doesn’t need to be something super restrictive that brings your bet sizes down to the point that it’s no fun. Instead, you simply need to have a realistic viewpoint of what size wager you need to use in relation to the amount that you have deposited so that you know, roughly speaking, how long you’ll have to go between deposits if you don’t hit a big win.

The five traps that we have listed out above are among the most popular traps that players fall into. They cause a tremendous amount of stress and lost value, and what’s worse is that they’re completely available.

If you take care to avoid these mistakes that we have listed out here, then you will be in a much better position to get the most from your play in the general sense, and you will be much more satisfied and happy with your overall experience.