How Can Metaverse Slots Change the Industry? 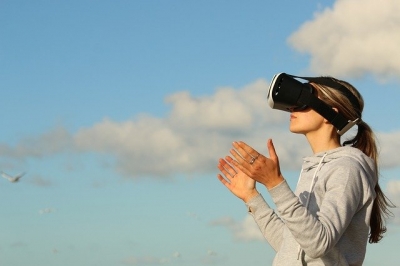 The online slots world has been stuck in a rut for quite a while. While the proliferation of mobile play shook things up based on platform changes, the overall style has largely remained the same. Here we explore what Metaverse online slots could do differently to shake things up.

If we go back in time to the early 1980s, which was about 40 years ago, we see certain patterns with slots of the time. Video slots started becoming more of “a thing” in the mid-late 70s, and they were certainly popular by the early 80s. The patterns and concepts we see there in that time, way before the Internet as we know it, strongly inform even the latest and greatest titles that we see in modern times.

Our question is this: Will we be seeing the same kind of thing 40 years from now that we’re playing with today?

If nothing really changes, we think the answer to this is yes. We’ll get into why we think that’s the case a bit more below, but the most important thing is that we believe a solution to this could be on the horizon. We are starting to see the first glimpses of casinos in the Metaverse, which could definitely change the shape of how the slots world works.

With that said, we’ve also seen new technologies flop and disappoint everyone involved. However, we believe this time will be different and that history is going to prove us right on where this Metaverse concept is going. Along with that, we have good reason to believe that the slot industry as a whole could be turned on its head as a result.

First Things First: Why Are Slots So Stagnant?

If you’re familiar with the online slot world, then you are probably familiar with what new releases look like these days. In terms of graphics, presentation, themes and gameplay styles, we haven’t seen that much change in the past 20 years. While things are definitely marginally better due to hardware and software improvements, the core ideas are still there.

For example, consider the following:

The biggest releases of the year are usually those based on some big movie or some big brand. It makes sense that this type of cross-promotion would yield a strong audience. However, according to our research, can you guess what the most popular slot is within the past 12 months of the time of this writing?

It’s a Megaways-style fruit throwback slot where the main feature is a set of free spins.

Here’s our point: Something fresh and new needs to happen in the slot world instead of just rehashing the same old ideas. It’s 2022. We’re supposed to have flying cars by now, but we can’t get past fruit machines.

Who remember when smartwatches came out? At the time, they were billed as something that people would mostly only use if they were really into fitness. However, they later became used for more convenient messaging and alerts.

They’re also known for failing spectacularly at being a platform for online slots.

This failure happened because they saw how popular mobile slots were and decided to take a stronger step in the same direction. However, they seemingly forgot the fact that players were being expected to play complicated games on around 10 square centimeters of space on their wrist.

The lesson to learn here is the same lesson that tells us that the Metaverse could be huge for gambling online. It’s not a step in the same old direction. Instead, it’s something completely fresh and new and different.

How Could These Differences Affect Online Slots?

First off, the idea of incorporating virtual reality elements has already been done quite a bit online. With that said, it’s usually a pretty dry implementation. In short, virtually all VR slots are simply the same games on a screen within a somewhat 3-D interface. Moreover, you don’t even need virtual reality headsets to interact with most of them. While that was a decision made to help keep things inclusive, it also largely negates the point.

Metaverse slots could be completely different. On the most basic level, they could incorporate social interaction in a way that we don’t have right now with slots. Chatting with players who are around you, meeting up with players in your favorite spot and so on could be great ways to mix it up with people without feeling so alone and non-social while playing.

However, the actual mechanics could differ quite a bit as well. Imagine games that are not based on 2-D grids of symbols and instead of 3-D arrays of symbols instead. That would be much easier to display and view when you can walk around and see the game from all sides. Paylines could go through this 3-D structure instead of staying on the surface, for example.

While these are two generalized examples, we have some more concrete ideas that we actually expect to happen.

How to Arrive at Your Favorite Metaverse Online Slots

The first thing to consider is how you get to the games in the first place. For example, the way many players handle this now is to bookmark their favorite titles in a web browser. Additionally, some providers and casinos offer “favorites” selections that keep all of your tagged games in one convenient place.

However, once you take away that type of interface and get inside of the Metaverse, things change substantially.

Perhaps you walk up to a special wall. On that wall are pictures of the various games you have “favorited.” You reach out and press the button under the picture, and you suddenly see yourself being teleported across the casino to the section with your games in question. This is one idea that’s already used in popular 3-D video games for non-gambling purposes. However, it carries over to the Metaverse casino concept really well.

Another option is that you’re able to sit down at a terminal within the virtual reality simulation and pull up any game you want. This would make it easier to sit with friends and let each person play their own favorites. We like how this idea increases the social factor, but at the same time, it does take away some of the ability to physically browse like what you would get by walking through a virtual casino.

Changes in Loyalty Programs and Promotions

How will you switch between different casinos? Will you have to physically get up and walk outside of the current one and across the virtual street to another? While that’s an interesting thing to think about, it also begs the question of how loyalty programs and other promotions will be handled.

The king of promotions right now is the deposit bonus. However, we also have other ideas like free spins, no deposit bonus codes, loyalty programs and other goodies. With that said, these promotions can get out of hand really quickly in terms of pure number. It’s hard to keep up with the ones we have online in the current environment, let alone adding a virtual reality environment to that.

To this end, we believe that two adjustments will take place. First, you’ll be able to enter a VR casino and walk to a section that lists out different promotions you can opt into. You can imagine this looking like a sort of bulletin board, for example. Second, we think you’ll have the ability to access these promotions remotely through something like a notification and search system within the Metaverse environment itself.

In this way, it’s similar to the email and notification systems we have for promotions now. At the same time, players can go look for specific promotions (via browsing, see above) as well.

Just like everyone else, we can’t really predict the future. However, what we can tell you is that something big is happening right now in the Metaverse slots world. We wholeheartedly believe that this is going to be the piece of technology that brings about the next generation of online slots and other types of casino games. While a part of us is a bit anxious to see what they could come up with, we also have enough experience to know the direction that the industry needs to go in.