The Pros and Cons of Playing With Live Dealer Games 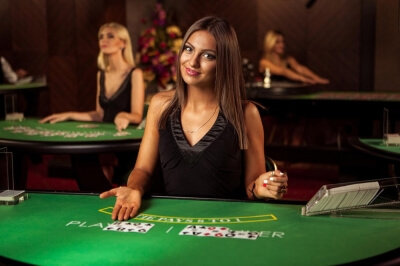 The increased prevalence of online casino live dealer games has put many players in the position of wondering if they’re a good pick. While they have plenty of advantages, there are some disadvantages as well, and they may not be the best option for all players.

The Two Sides of the Live Dealer Coin

Over the history of the online casino industry, there has been a stark contrast between what’s available in the online environment compared to what you have in a brick and mortar casino. One aspect of the industry that merged the two was the live dealer table sector.

While the brick and mortar and online sides of the casino industry were united to some degree with the expansion of live dealer games, the fact of the matter is that they are more of their own sub-genre and do not really fit in with either.

In any case, we’re going to break down some various pros and cons so that you can make a more informed decision about where and how to get in on the action.

One of the biggest things that’s lost in the online casino environment, compared to playing in person, is the social factor. While you generally have little if any social interaction with other players in an online playing scenario, the social part of the experience is key to playing in a brick and mortar environment.

In fact, it’s one of the main reasons that people travel to seek out these types of casino experiences when they could often just play the same games at home.

Chatting up your dealer and other players at the table is possible in live dealer table games, and that’s a big aspect of things that often gets overlooked. There’s a certain degree of loneliness that can come from playing by yourself for certain players, and if that’s the case for you, then you should check out how the chat functions work at a live dealer table.

From the casino operator’s perspective, there are certain overhead costs involved when running games. With that understanding, it’s not hard to see why it costs more to run a live dealer game than to run a traditional online casino game.

To deal with this increased overhead, they require a larger minimum bet size in most live dealer games than when compared to their more usual online counterparts.

While it’s definitely understandable when it comes to why they have these minimums in place, it’s something that a lot of players don’t realize until they actually try to get started playing. It can be a letdown if you’re more comfortable with lower stakes than what’s available, and that’s why we want players to know ahead of time what the issue is with this.

Graphics have come a long way in the online casino industry, and if you don’t believe that, then you should see some of the stuff that was produced in the mid-late 1990s. It looks pretty rough by today’s standards.

Even though things look much better now, and even though there have been tons of serious advancements in this regard, the fact of the matter is that there is still no comparison to the live dealer interface for many players.

We’ve seen situations with certain companies producing games with virtual reality or otherwise 3-D characters dealing games, but even that can’t compare to an actual trained human dealing cards or handling dice or a roulette wheel with a very serious amount of skill and grace.

That’s something that many players can’t really do without because the overall feel of the games, visual presentation included, is a very important part of the experience for them. If that’s the case for you, then it’s a major pro compared to regular online casino titles.

When you’re playing by yourself in a more traditional online setting, you can pretty much go at your own pace. No matter what kind of games you’re playing, but especially with table games, you’ll have options on how quickly the game can go that you just can’t get with the live dealer experience.

Live dealer games have to make sure that all players have enough time to make their decisions without rushing them, which means that you have to go at the speed of the slowest player at the table.

This is a bad thing for most people because the vast majority of players don’t want to sit around waiting for unnecessarily long times. Instead, they want to get on with it and get to playing as quickly as they’re comfortable with.

Unless you like really taking your time and dragging things out, you will get in a lot fewer bets in live dealer table games than you get with more typical online play.

Another aspect of live dealer tables is that you get to choose your dealer between the ones that are available, and that’s a degree of customization that you just don’t get with the regular online games.

This might seem like a minor thing to some players, but it’s a major issue for others. What one person likes to see while they are playing can be completely different than another, and most live dealer online casinos have plenty of options within the same game so that players can have the setup that most closely matches their ideal.

This type of customization of the experience can only be good for players because it increases their options while also creating competition between software developers and casinos themselves to provide a better and better level of gameplay and comfort for the players.

While it’s not nearly as bad as it was when live dealer casinos online first started taking off, the game selection for live dealer games is decidedly limited compared to other online avenues. Again, this comes back to the overhead required and other factors that we’ve already discussed, so it’s a symptom of a lot of the same root issues that are just a part of the reality of these games.

To give an example, it’s really difficult to have a live dealer craps option that’s viable. This is simply due to the fact that the gameplay isn’t suitable for the online live dealer environment, and every attempt to force it to work has simply not been a hit with the players because of the limitations it puts on play.

This is a real shame because craps is one of the most social casino games out there, and that’s why you’ll often see big crowds around the tables in brick and mortar locations. However, other games have suffered the same fate because of a lack of popularity or other reasons.

There’s no doubt whatsoever that the advances that have been made in the live dealer space are tremendous and that they’re a great option for a whole lot of players. However, they simply aren’t the right fit for everyone, and we have provided these pros and cons so that you can more easily decide what might work for you and what is not so appealing.