Why Are Three-reel Slots Making a Resurgence Online? 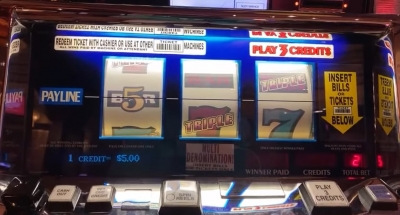 Many fans of online slots will tell you that three-reel games, also known as classic slots, are largely a product of a bygone era. If that’s the case, then why are they making such a resurgence online? Here we look at what’s going into the increasing popularity of these games and what to expect from them in the near future.

Classic Slots Are Making a Comeback on the Internet

Back when slots were mechanical in nature, most games had three reels. This was simply a matter of necessity because of the mechanical complications inherent in producing and doing maintenance on the games. As things progressed to using video screens, we moved away from three-reel titles for the most part into games that have at least five reels.

This has been very true online, but something unexpected has begun to happen. More providers are creating three-reel slots than we’ve seen in previous years, and players are really enjoying them.

The obvious question to ask here is why the companies are making these titles. However, the more important question is probably about what it is that players are enjoying about them so much.

In what follows, we look at what’s different about these three-reel titles compared to the ones that came in the generations before. From there, we look at the resurgence of these games in practical terms by looking at what the players want. As you’ll see, it’s pretty obvious that something is going on here that could cause a major shift in slots.

What Are These Three-reel Games Doing Differently?

Before we get into what’s so different now, we need to understand why they fell out of favor back then. Classic, three-reel slots were pretty limited in what they could do because of their mechanical construction. Certain types of bonuses and things of that nature were possible, as were progressive jackpots. However, they were largely locked into a certain set of ways of doing things.

When video slots came along, the possibilities increased exponentially. In short, you have very few limitations on which kinds of features you can create. Moreover, the size of the grids of symbols for the games are more variable. This is because the same set of computer chips can run a wide variety of games. With a minimal number of customized moving parts for specific games, developers got to run wild.

Each generation of video slots afterward, all the way up to what we see in the modern era, have been made more and more complicated. We see new types of features and formats every few months. Decades of competition have narrowed down the types of things that players like the most.

And now, after all of this groundwork has been laid, software providers have suddenly realized something. All of the tropes that are “common knowledge” about three-reel slots are based on how they were handled several decades ago. These are the tropes that made them unpopular compared to their video slot counterparts. However, they are largely inapplicable in today’s industry.

We hesitate to even use the term “classic slot” at this point. Actually, we’d prefer something closer to “modern three-reel slot,” but that’s not exactly an industry standard term. In any case, imagine some of the basic ways that modern concepts could be applied to a three-reel game.

These are just a few very basic ideas of how this could work. To our knowledge, some of these have been used, and others have not. However, whether they have or have not been used is not the point. The point is that a massive amount of potential is just being sat on waiting to be had.

And from what we’re seeing, these software providers aren’t wasting anymore time. We’re seeing new three-reel games come out virtually every month. What’s more is that they’re just as entertaining and action-oriented as their video slot cousins.

The Possibilities for Mobile Play

More people play slots via mobile than ever before. In fact, many casinos report more total spins being played using mobile than using a computer. However, one complaint we hear from players often is that the games simply don’t leave enough space on a phone screen. With five, six or more reels, a lot of space is needed on a type of device that inherently doesn’t have that much screen real estate.

On one hand, this limits how some modern games can be played on the go. On the other hand, it shows an opportunity for three-reel titles to jump into the mobile space.

One way that this can go is to simply put three-reel, three-row titles on a mobile device. The reels will fill the screen up well, and it leaves plenty of room for the betting interface and other controls. That’s a good idea for sure. However, we can be even more creative than that.

What if the game has higher rows? For example, it could have three reels with six symbols showing on each reel. The game could then be displayed in a portrait mode on the screen for the players. Additionally, this could even lead to having room at the bottom for the “spin” button and bet selection. Many players prefer games in portrait mode because it’s easier to play with a single hand. That could be a solution for software providers looking to capitalize on players with that preference.

Visually, this is pretty easy to get used to. Additionally, it gives the room that you want from a portrait style mobile slot. We like what it has to offer for players in the sense that you can enjoy these types of game layouts with a single hand while leaving your other hand open. Seeing it used already gives a lot of precedent for using it in the context of the three-reel game.

For the most part, online slots that can be played on the computer or via mobile dominate the online landscape. However, if we think about how we got here, we can find some room for improvement on the model.

Modern video slots, played via mobile, were originally styled for players who were paying a lot of attention in longer sessions on the computer. They were not designed for people out and about, playing shorter sessions that could last just a few spins. This goes beyond the issues of holding the phone in landscape mode that we mentioned above.

Instead, it goes all the way down to the level of complexity of the games. However, we’re not saying to “dumb them down.” What we’re saying is that a different approach could be a lot more fruitful for mobile players. It’s simply a case where their circumstances are fundamentally different than the original intent of online slots.

Some Examples of How This Can Be Achieved

Let’s look at some specific examples of what we mean here. First, consider a video slot that has a whole lot of bonus features and thousands of ways to win. This is generally entirely too much for a mobile player to try to keep in mind. Additionally, since they’re doing other things while they’re on the go, it can often be more annoying than anything for some players. As a result, a more straightforward set of features could be a useful idea in these cases.

Volatility and hit-rate and other aspects of the situation that could be considered differently. If the average slot session was, for the sake of example, 100 spins on the computer, then what do we think it would be via mobile? Surely it wouldn’t be more than 15 or 20. If you’re expecting to play 100 spins in a row on average, then a streak of 10 to 20 spins in a row without a win isn’t such a big deal. However, if your entire mobile session was super likely to end in not a single winning spin, then what? You’d probably not want to keep playing in the future.

One solution to this would be a higher hit-rate with a lower volatility. Additionally, this would allow players to hit smaller wins more often. Making it more likely to pick up at least one or two wins in a shorter mobile session would help everyone. For the players, it would improve the fun and quality of the play sessions. However, for the casinos and software providers, it could drastically increase player engagement.

Our point is that this is an easier arrangement to achieve within the three-reel slot domain.

The entire world of online slots is dominated by games with five or more reels. Additionally, it’s been this way for quite some time. However, we’re seeing a push from a variety of software providers when it comes to three-reel games. We’ve broken down a lot of the reasons for this, but we’re curious to see where it goes from here. If we’re right, then mobile is the prime place to aim these titles.