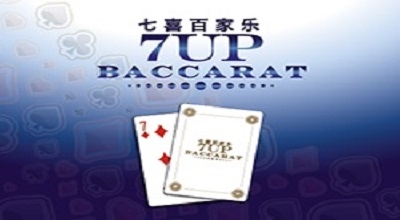 The live dealer 7up Baccarat game by Opus Gaming offers players an atypical style of play inside of a Baccarat setting. Every hand starts with a seven, and that drastically changes the strategies and gameplay. There’s also a special Super Sevens side bet available that can be found nowhere else.

Casinos with 7up Baccarat

An Introduction to 7up Baccarat

Baccarat is one of those games where it’s difficult to find too many variations of it that fundamentally change the core rules like you can for other titles like blackjack. However, Opus Gaming has a version available called 7up Baccarat that plays on live dealer tables online.

This game is very similar to, but not exactly like, the game found in a handful of casinos in Singapore.

Because this is such a localized game in general, it’s not really found in the live dealer arena that much online or even in regular online games, and that means that it’s a fresh opportunity for most players who haven’t ran into it yet. The rule set has some fundamental changes that switch up the action and that add some excitement, but the side bet offering is also very solid. We like what they have to offer here with this game, and we’re going to break down everything that you need to know about it in what follows.

We’re going to jump right into how this game is played so that we can look at what makes it stand out. We’ll look at the procedure itself, what sets it apart from other forms of Baccarat and how the payouts differ as well as a key side bet.

The process of playing this game is actually pretty straightforward. We’ll walk you through an example hand here:

It’s also worth pointing out that the live dealer interface allows you to take your time with your bets since you don’t have to wager on every single hand, so you can play at your own pace.

For the main wagers, there are only three options. You can bet that the Player hand wins, that the Banker hand wins or that the two hands give a tie.

The only other wager available is the Super Sevens side bet, which has its own betting option on the table that’s separate from the rest of the action.

This side bet is pretty straightforward. It counts the total number of sevens seen on the game board across both the banker and player hands, and it awards wins based on how many of them you see. Note that you will always have at least one because of the rules of the game, so you’ll need to have two or more total to get a payout.

Your wins are based on the multiple of the amount that you wager on the side bet itself, and the following are the payouts that you can receive.

Something cool about this side bet is that you get a minimum payout of 2x when you win, which you’ll do so more than 25 percent of the time. That means it hits often and gives you some pretty solid payouts in the process.

A Comparison to Other Forms of Live Baccarat

The rules and payouts of the 7up Baccarat live dealer games are a bit different than what you’ll normally see otherwise in the live dealer Baccarat genre. There are a few key differences, and you can decide for yourself if these changes sound good to you or not.

These changes in the payouts and how they’re dependent on the totals of seven can add a lot of action, especially if you have the 700x jackpot hanging over your head at all times from the Super Sevens side wager.

Strategy in 7up Baccarat

The player and banker bets are worth about the same in this game with the player wager having a house edge of 2.60 percent and the banker bet having a house edge of 2.56 percent. While the banker bet is better mathematically in the long run, it’s such a small difference that it doesn’t really change much, and you’ll probably have more fun trying to predict which of the two will come up instead of just playing the banker on every single hand as a matter of principle.

The tie bet is usually a wager with a payout rate of under 90 percent and a house advantage of more than 10 percent in Baccarat games, but in 7up Baccarat, it’s much more reasonable. The house advantage on this wager is 4.05 percent, and while it’s worse than the player and banker options, it’s not terribly so.

Something worth noting is that card counting efforts are not viable in this game despite it being a live dealer environment. This is because Opus Gaming uses an automatic shuffler to continuously shuffle the cards between each hand, so you never get the shoe penetration that you need for counting cards to be a viable strategy.

The thing to really know and understand about this title is that it’s geared toward a very specific audience of people who want something fresh and different from their Baccarat experience. As such, you won’t see the strategic depth of something like live dealer blackjack. Instead, everything is about an exciting side bet and some differentiation on the betting options to allow for different payouts and more meaning to the cards that are dealt while you’re fishing for sevens to make the Super Sevens side bet a winner.

Which online casinos have 7up Baccarat?