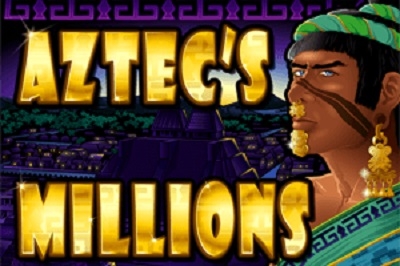 As one of Realtime Gaming’s most popular and somewhat infamous progressive jackpot games, the Aztec’s Millions video slot brings players into a world with free spins and other ways to get paid on top of a seven figure top jackpot.

An Introduction to Aztec’s Millions

Before the modern era of progressive slots, we had entire lines of games that brought players one spin away from winning massive payouts that would change their lives. The Aztec’s Millions progressive slot is one such game, but it’s definitely a title that is dated by just about every standard.

Even with that being the case, however, it’s still a strong title that gives players a lot to find interesting and exciting.

The graphics are typical of the time in which the game was created, and because it is an older title, it won’t really be competitive in that area compared to more modern slots. There are a lot of characters, animals and card rank symbols on the board along these lines.

The gameplay is pretty solid, and it has held up pretty well over time because it’s based on timeless principles like having a lot of good wins and some fun features. The only downside here is that the betting structure is very rigid and is not particularly inclusive to low stakes players.

The format is really easy to get used to here, but the betting will be a problem for most players. Here’s what to expect:

The first thing that’s going to stand out to most players here is how rigid the betting options are and how that excludes most people. That’s a completely fair assessment, and for those who would like something similar to this game but without these restrictions, check out our other progressive slot reviews.

Aside from that, it’s also worth noting that the volatility is pretty severe. There isn’t really much on the pay table or feature set to temper down the volatility from the progressive, so you’re in for a wild ride with massive swings if you choose to play.

While the betting is restrictive, the feature set for the Aztec’s Millions online slot is actually pretty cool. In what follows, we’ll go through each of these and show you what you need to know about them.

The Aztec King wears a green wrap in his hair with a golden earring, and he’s looking to the left with a golden frame around his head. He’s the wild symbol in this game, but you need to understand something about him:

This wild only shows up on the second, third and fourth reels.

That means there are no ways for him to give you payouts on his own. He also does not count for the scatters or Aztec’s Millions progressive symbol, but he helps with other wins.

The golden idol symbol appears on all five reels. It’s gold with green grim, and there is a purple framing around it in the background. This is a paying scatter, and it does not give wins based on coin values like everything else. Instead, it gives wins based on a multiple of your entire wager, which means you can multiply these payouts by 25 to find the equivalent coin based wins:

These aren’t quite the best non-progressive payouts in the game, but they’re close. Moreover, they’re easier to hit than payline wins, especially for three or four of a kind, because they don’t have to show up on any particular reels or in any particular spots to give you payouts.

You’re able to get free spins thanks to the golden idol scatters. The number of free spins you’re awarded comes down to the number of idols that you get on the screen at once, and they come along the following lines:

During the free spins mode, you’ll get extra prizes for scatters. You can re-trigger the feature by getting three or more scatters to add the above numbers of free spins to your totals, but one scatter by itself will award 1 extra free spin while two will give you 2 additional free spins.

On top of that, scatters also give you an instant win worth 25 coins or 1x your total bet amount for each one that lands. This is an added amount that isn’t something like you see in most modern slots.

Aside from all of this, there is a 3x multiplier applied to all of your payouts except the progressives and the bonus pays that we noted above. This adds a tremendous amount of value while also keeping the volatility high.

The Aztec’s Millions progressive slot logo appears on all five reels, and any number of them will give a payout. These payouts below are based on coins except for the five of a kind award for the progressive, and they need to land on a payline from left to right to award prizes.

The jackpot itself always starts out at the €1 million level and keeps gaining in size until someone wins it.

How to Win at Aztec’s Millions

The volatility for this game is super high, and you should be prepared to have serious swings, especially considering the €5 per spin cost that cannot be changed. In short, just make sure that you’re playing responsibly with the bet sizing, and understand that you have no options to improve your RTP percentage or your volatility in this game outside of playing when the progressive is on the higher side.

The Aztec Queen pays 5,000x for five of a kind and is the best-paying regular symbol. She also gives payouts for as few as one of a kind. The jaguar and headdress get 2,500x and 1,000x each, respectively, and they both pay for two of a kind or more. Wins of 500x are yours for five of the necklace or golden pendant symbols on a payline.

The card rank symbols run from 200x to 100x for five of a kind combinations, and they all require at least three of a kind for a win.

If excitement is the thing you’re needing in your sessions, then you’ll really love the gameplay that’s offered from Aztec’s Millions. The hit frequency of the features in this video slot is substantial enough that slot fans will be sure to not get bored, and this title is a strong part of this company’s overall portfolio because of its visual appeal and gameplay.

The overall concept put into play as the basis for this title is a great foundation for the style of play and excitement. Also, we seriously enjoy how the visual appeal gives players an overwhelmingly cohesive gameplay experience compared to only being an unimportant detail.

With that said, it’s definitely an older game, and players will want to be careful about the €5 bet size that’s forced.

Which online casinos have Aztec’s Millions?