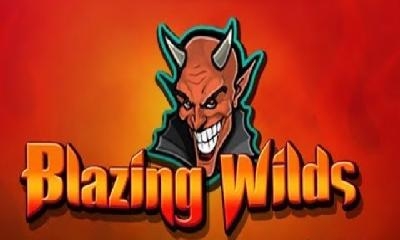 The Blazing Wilds is an online slot produced by Slotland that uses a devil-based theme and gameplay with some solid wild-based features. Players have opportunities to win up to 3,000x with the game’s top jackpot, and multiple other four-figure wins are also available on the regular pay table.

An Introduction to Blazing Wilds

In most Western cultures, the number 13 is seen as an unlucky number, and we’ll often see it used ironically as a symbol of luck in reaction to that. The Blazing Wilds slot ties this type of tongue-in-cheek play on a devil-based concept with some solid features and a value-oriented pay table.

What makes the Blazing Wilds video slot really stand out is that it has a simple but solid look combined with straightforward but entertaining gameplay.

To put it one way, Slotland isn’t known for putting together titles based around popular media brands or whatever is “trendy” at the time. Instead, they try to create a wide range of content based on a lot of different ideas and play styles so that everyone will have titles that fit what they’re looking for.

This game is best seen through the lens of being a part of that overall whole where it will appeal to a lot of players due to its theme or gameplay, but it won’t necessarily be the best fit for everyone on every level.

The way the betting and layout are set up in this game have aspects to them that are atypical but that fit the gameplay pretty well. Along these lines, you should pay a little more attention to the format of the game and the betting options than maybe you would for other titles:

An auto-spin option is also available for players who want to just sit back and take it easy while they play, and it’s worth noting how atypical the bet sizing situation is for this title since there are five rigid options available with little room for customization.

A significant portion of the value that you get from the Blazing Wilds online slot comes from the regular pay table. With that said, the bonus features can change up how you get value from the pay table while also giving you a bonus round that offers enhanced opportunities to win.

The wild symbol is a set of flames with an orange and red frame around them. They offer some pretty solid payouts that includes the best individual winning combination that you can get:

The wilds are a significant part of the game as a whole, and they show up fairly often. They help you to get wins by substituting for anything other than the bonus scatter symbol. Because most of the value of this slot comes from the pay table and the regular pays, the wilds help to increase that value quite a bit.

There’s a purple symbol with a goat in the center, and this functions as the bonus symbol for this game. It appears on the middle three reels only, and if you get all three on the game board at the same time in any position, then you will activate the free spins bonus round.

Note that these scatters do not offer payouts of their own.

When you trigger this feature, you’re always given 13 free spins. The Blazing Wilds video slot plays on the number 13 quite a bit along these lines.

During the free spins mode, there are two things that happen that you need to be aware of:

As you can see from the above, this free spins mode offers a lot to get excited about.

The 13th payline in this game is listed as the one that goes straight across the middle row. In the Blazing Wilds slot online, this payline will always double the size of the payouts that you get on it. This does not affect the scatter symbols in any way.

However, it does mean that the best payout in the game is a whooping 6,000x achieved from getting five of the wild symbols lined up on the 13th payline.

How to Win at Blazing Wilds

The key to this game is to pretty much just pick a bet size that is a good fit for you and stick with it. You really want to aim for the larger winning combinations, especially if you can get them on the 13th payline.

Since the volatility is well up into the medium range, and the hit-rate isn’t as high as some other slots, you need to look for an upswing where you catch a number of bigger wins in the same session. One option is to drop down one bet size and to play longer sessions, but using the auto-play option can help you to achieve the same basic idea by getting in more spins in a shorter period of time.

The devil symbol is the best-paying symbol other than the wilds. It gives a thematic 1,666x win for five of a kind along with 333x for four or 66x for three. Dropping down from that is the pitchfork head symbol, which offers another four-figure payout of 1,000x for five of a kind.

The heart with a devil tail pays 750x for five, and you can drop down to the 500x level for five of the red quill.

From there, we have the card rank symbols. The A and K each give you 250x for five, which are high for symbols so low on the pay table, and that is indicative of how high the volatility is for this title. There are also Q and J symbols available that pay 75x for five on a payline.

With Slotland’s Blazing Wilds slot, you get a pretty good mix of action-oriented gameplay with a theme that’s simple but fun. We like how they incorporated meaningful numbers into this title, even if it was a bit tongue and cheek, and it’s clear that a lot of thought was put into the details of this game instead of just throwing something together and putting a devil-based theme on it.