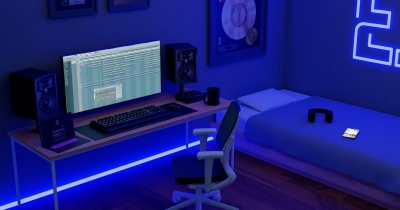 While they originally gained popularity for table top RPG games like Dungeons and Dragons, digital gaming tables are being used more and more for casino games. Since many people already have these built, the technology is just waiting to be leveraged more for a variety of gambling uses.

If you’re not familiar with digital gaming tables, they’re widely used in a variety of table top games like Dungeons and Dragons. The idea is that these games are traditionally played with paper and physical dice. However, using a digital interface allowed users to create even more vivid worlds, store them more easily and share them with friends.

The exact same technology is slowly starting to be used for gambling and casino purposes in peoples homes.

What’s really interesting about this technology being used for gambling is that it has a ton of possibilities. While we don’t necessarily think it will take over mobile or PC casino play, it’s still got a lot of promise. Additionally, since the technology seems to get less expensive each year, the viability for players to make their own builds is better than you think.

In what follows, we want to walk you through where this technology is in its current stages. Along these lines, we’ll look at how it can be used in the online gambling arena today.

Starting Out: How Do These Digital Gambling Tables Work?

On the most basic level, all you really need to get started with one of these tables is a touch screen monitor and a table that can hold it as a frame. However, the screen is laid into the table in a flat orientation. With larger screens, this could mean a group of people could play all at once. Alternatively, with a smaller screen, it may just be for a single user.

For someone who really preferred to play specific games, it could be a great investment. The idea is that they hook up directly to a computer, either separate from the table or built-in. From there, you play online casino games like you would on any other screen. In theory, you could also use some type of mobile tablet, but the screen size would be limited.

Traditionally, these tables are used in scenarios where you could have multiple people together enjoying themselves. However, that does not have to be the case. Additionally, if you enjoyed a specific game quite a bit, it could easily be seen as a great investment into your experience. Having your favorite snacks and a cup holder built right in could be the types of personalization available.

As you can see, we have a sharp split between two types of these tables: group play or single use. That split is the main thing to consider when looking at the possibilities for these tables.

The Group Play Option: A New Purpose for Existing Tables

The first case we want to look at is what could be done for groups who want to play together. Since it’s unlikely that players would want to build or purchase their own rigs just for this purpose, we have to assume it would be more likely that they would use existing tables. Therefore, software would need to be produced that suits these types of setups. It’s something that could definitely be done, but we run into a few hurdles.

We will concede that the third point above is on somewhat shaky ground. It’s hard to guess the trends of gaming in the general sense. Additionally, we could see it suddenly become “cool” to have casino nights together in those communities. Nonetheless, we think this is a lesser option compared to the possibilities for single-player setups.

The Cost and Logistics of the Multi-player Digital Casino Tables

If you want to go with the above multi-player idea, then you quickly run into two main issues. The first is cost. Creating a setup that allows several players to gather around comfortably definitely has an upfront cost that many people wouldn’t be willing to take on. Additionally, you have the issue of groups of gambling buddies being close enough together geographically.

This second issue is really the one that concerns us the most. However, it’s simply because of the fact that many people meet gambling friends online now. Like most communities, much of our social interaction has switched to the online world. As such, it’s much easier for friends to play together online with video chat and other technologies, many of which are free or low-cost, than to get together in person.

The Single-player Digital Gaming Screens for Casinos Are Another Story

The single-player option is really where we think most of the potential lies for this technology. In fact, we think it’s one of the most likely advances we could see in what’s stylish for players. After what we had to say about the multi-player tables above, you may wonder why we say that. It’s as simple as this:

Not a single one of the disadvantages of multi-player setups apply to single-player arrangements.

Here we want to take a look at some of the possibilities for a few reasons. First, we want players to understand what we could see in the future. Second, we want to give players ideas for making their own setups. This is really what we believe to be the most comfortable and fun way to play online. Additionally, the level of available customization allows you to really make the experience your own.

How to Get Around the Issue of Cost

At this point, many players are aware of how smartwatch casinos ultimately failed. What it really came down to was that people weren’t willing to pay for expensive, new technology to get an inferior experience to what they could have on their phones, which they were required to carry around anyway so that the watch could operate.

Guess what? Digital gambling tables for one player do not have to be expensive. In fact, you could easily make a starter setup for under €100 if you wanted. However, chances are you already have some of the components of a straightforward setup. Therefore, it could be much less expensive, and in some cases, it wouldn’t cost you anything.

Here’s an example of what we mean. What happens if you take a tablet and lay it flat or propped up on a lap desk that has a drink holder and a place to hold up your phone? You ultimately have a starter version of one of these gaming tables for just one player. If you start with that idea and add one or two things to it here and there, you can really customize it to fit what you want.

Taking Things to the Next Level

If you were so inclined, you could take things to the next level. Using a small touchscreen monitor embedded in a small table could be your next step forward if you really like the single player table setups. Additionally, they’re not so complicated from a tech standpoint that most people would have trouble building one themselves. The monitor would just connect to a computer or other device, and you tap on it to choose games and make your bets just like on your phone or tablet.

Of course, none of this is actually necessary. Remember what the point of the whole thing is. As long as you’re comfortable and are having a great time, then that is what works for you.

One particular variation that we want to point out is sometimes called a personal slots cabinet. We want to give you this example because it’s probably the most popular single player version out there today, and it’s set up slightly different than a gaming table but with the same basic idea.

In these arrangements, instead of having a monitor or tablet laying flat, parallel with the ground, it’s upright in a type of cabinet. This is similar to the positioning you might see for land-based video slots or video poker. In Australia and New Zealand in particular, these setups are often called “pokies,” which is short for a video poker machine, even though they house slot games.

You could have a comfortable stool, cup holders, custom sound and so on in such an arrangement. For build ideas, you can look up how people make their own custom arcade cabinets as well. However, you can see how this could be a lot more comfortable than VR casinos that require you to wear equipment on your hands and head.

In any case, remember that you do not have to go big or expensive to benefit from these ideas. Our recommendation is to start off with what you have. If that just means a tablet laying flat on a table with the music and atmosphere you like, that’s a great start.

Ultimately, you have to remember that the point isn’t to have the most fancy setup possible. Instead, it’s that you enjoy what you’re doing, have fun and make it an expression of yourself.