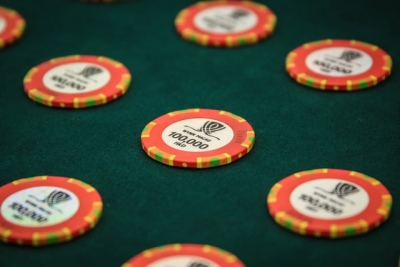 The growth of the online casino industry over the past two and a half decades cannot be denied. However, something most people aren’t aware of is how it changed the entire concept of bet sizing. Here we dive into a fascinating series of events that changed how we bet on our favorite games.

The Evolution of Bet Sizing in Casino Games

One of the parts of playing online casino games that people take for granted is bet sizing. You usually think, “So what?,” when you’re given your betting options. Virtually all players just choose their bet size and move on with their play.

However, an evolution has happened over the past 25 years to the idea of bet sizing in general.

The reasons for this happening are pretty interesting on their own. Additionally, since they affect players in today’s games, they become even more critical to understand if you want to know where the industry has been and where it’s going now.

The online environment and its various expansions have changed things quite a bit over time. However, if you understand the extent to which this has actually happened, it can really blow your mind.

From Cash to Chips

One of the first things that was done that really changed casino betting was the chip. The invention of the casino chip completely changed how we handle betting. First off, it made it clear at a glance how much was being wagered. Moreover, they were easier to carry and manage at the table. Finally, they allowed for security to be tightened up since players would have to cash out at the cashier eventually.

However, one thing that players can attest to is that it also changes how you view the bets. Playing with cash in a poker game, for example, leads to players being measurably tighter. Switch to chips, and a certain “disconnect” happens that allows player to be more objective with their play when it comes to being more aggressive.

The point that we want to make here is that changes had happened over time to betting before online gambling. However, once the online options became available, this evolution sped up quite a bit.

The Influence of Game Selection

A really great place to start looking at this is Baccarat. In the pre-online gambling days, Baccarat was generally held to be a higher end game. This was done by keeping the minimum bet size fairly high. It would usually be played at a very large table operated by three croupiers. A low number of hands per hour and a low house edge (as a percentage) are largely why.

If Baccarat had been played with lower stakes, the house wouldn’t have been able to make a profit. That’s taking into consideration the cost of the croupiers and other personnel. It also considers the cost of not using that floor space for other games.

Once online casinos started getting in on the action, the situation was changed. Players could enjoy Baccarat on their own and play at their own pace instead of waiting for other players. Since there were much lower overhead costs, this allowed the minimum bet sizes to be made particularly small. Now, you can play for as little as €0.10 per hand in a lot of instances and sometimes less than that.

As a result, game selection has been a big influence on how bet sizing is affected. They affect each other overall since it’s a two-way street. However, there’s no denying that the online environment changed this aspect of the game.

The traditional betting scheme for a slot was based on placing wagers on paylines. Each payline would receive a different bet using a different size coin. They’re called coins in online slots because literal coins were used originally. From there, you’d multiply the paylines by the coin size to get the total bet.

In the early days of online slots, and even for some games now, this same approach is used. However, it’s used less and less for a few key reasons:

For these reasons and others, the coin-based system has fallen out of favor for the most part. With new online slots, for example, it’s rare to see this used. However, it’s had other affects as well.

The model used now is more inclusive than ever before. For the vast majority of progressive titles online these days, you can qualify for a progressive with a bet of any size. To keep things fair, your chances of winning are adjusted proportionately. For example, you’d have twice the chance to win a progressive with a €2 bet than you would with a €1 wager. However, if you make the €1 wager twice, that’ll be virtually the same progressive chance as a single bet for €2, and that’s a cool way of keeping it so that all kinds of players can enjoy the games.

Blackjack and Other Games

Slots aren’t the only games that have seen major changes in how betting works. In land-based casinos, it’s rare to see a blackjack game that even allows €1 bets. For a long time, a special pink chip worth €2.50 was available at some casinos as an alternative to the traditional minimum of €5 per hand.

Brick and mortar casino goers can tell you that these pink chips weren’t allowed to be used on virtually anything else. That’s because other chips weren’t available to pay denominations of €0.50 that would inevitably occur.

In today’s online environment, it would be unheard of for a site to offer a €5 minimum bet. It’s to the point that even a €0.50 minimum at the blackjack tables is looked at weirdly.

This is great news for players for a lot of obvious reasons. Having more flexibility in the amount you can wager is pretty awesome. However, the fact that there is hardly any overhead to let additional players enjoy the game is why it happens.

The Influx of Live Dealer Games

If you want to see somewhere where bet sizing is in an interesting spot, check the live dealer tables. Evolution Gaming held a stranglehold on the live dealer market for several years. However, more competitors have entered the mix like Playtech and Net Entertainment. As a result, there’s finally competition on a variety of elements. That includes bet sizing.

The first thing about bet sizing on these games is obvious: The overhead for running them is higher. The live dealers’ wages aren’t even the main cost here. It costs a lot to stream the games, maintain the sets and so on. The production costs in general are the key issue here.

However, because the games scale so well, it’s not as big of a deal as many people would think. Most live dealer games now do not have maximum numbers of players per table. Instead, all players share the same hand or table, and the betting is handled virtually. This keeps the dealer from having to manage chips, which again keeps the games moving smoothly.

If you ever look at the betting options for an online casino game now and wonder why they are what they are, then now you’ll have a better idea. They are the sizes and structures they are for a reason. However, the online casino industry has forced this aspect of the games to evolve. It’s to the point that we’re even seeing changes with brick and mortar games to match.