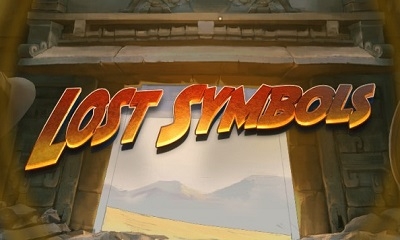 Concept Gaming has brought a ton of action in their Lost Symbols online slot. Based on a motif similar to a popular set of adventure films, you’ll go deep into ancient ruins and try to land some serious treasure as you navigate wild multipliers, bonus wheel features and more.

An Introduction to Lost Symbols

The range of themes and concepts we see in online slots doesn’t always grow that much. As a result, we frequently see certain ideas used over and over in different ways. Concept Gaming knows this as well as anyone, so when they produced their Lost Symbols video slot with its archaeological adventure theme, they knew they had to do something special.

That’s why it’s so impressive how they bucked so many of the trends with this title.

We’ll get the obvious out of the way first. The very first thing most players are going to notice is that this title has four reels. That’s an abnormal number of reels to have for a video slot. However, they made it really work and created a style of gameplay that uses it perfectly. Additionally, this style of play ties into the concept of the slot quite a bit.

With the theme used here comes a certain expectations of the graphics and tone. Concept Gaming knocked these expectations out of the park. The presentation is top-notch, and all of the symbols have a ton of detail. Additionally, they tie into the game’s theme perfectly by mostly looking like different idols and artifacts that could be found on one of these types of expeditions. Overall, they did a perfect job tying the gameplay, format, symbols and overall graphical feel together.

The layout is pretty important here because it’s so atypical. However, it’s still really easy to get used to. Additionally, it doesn’t take away from the action factor at all. Here’s what you need to know:

We noted above that this game has bet sizes based on 10 coins, and you wager on 20 paylines. While that’s confusing, as it turns out, you can actually ignore every bit of it. That’s because this game’s payouts aren’t even based on coins; they’re based on your overall wager. For example, a win worth 8x on a bet size of €5 per turn awards a €40 payout.

The volatility of this game is a little below-average. A lot of that comes from having so many paylines packed so tightly inside of an area that’s smaller. It also comes from how the payout structure only has two tiers (for three and four of a kind) instead of three or more like what you normally see with games with five or more reels.

The gameplay style of the Lost Symbols online slot largely centers around the game adapting to the format at hand. However, this means you get some different types of features and payouts than usual. Here we’ll break all of it down for you to make it clear what you’re getting into before you play.

The wild symbol in this title is a golden mask idol. It also says “WILD” across the forehead in red letters, so it’s pretty easy to spot. This is a wild multiplier with stacking multiplier values as well.

With that said, it only shows up on the last three reels. As a result, you will not be able to get winning combinations of only wilds. We’re okay with that, however, because of how much value they give to you anyway.

Your total multiplier will depend on how many wilds are used in the combination:

As you can see, these symbols bring plenty of value thanks to these multipliers. Overall, this easily gives more rewards than if they appeared on all four reels without the multiplier effects.

The main bonus feature in the Lost Symbols video slot is all about getting extra chances to win. However, you can get different numbers of spins depending on how many bonus symbols you use to activate the feature.

In this game, the bonus spins happen on a special wheel. Additionally, you’ll see a variety of values on the wheel that run from 10x all the way up to the 250x level. However, there’s not a big drop from the top of the available wins like what you see with most similar features.

We have one other thing about this feature that players will probably want to know. The wild symbol does not substitute for the scatter symbol in this title.

If you look at the available paylines for this game, you’ll notice something interesting. All of the lines are vertically symmetrical except for two. On the listing, this is payline number 2 and payline number 16. What you’ll notice is that neither of these have a counterpart, and as a result, you end up with a slightly uneven payline density in this game.

In most five-reel slots, you’ll have this to an extent. However, with four reels, it’s much more pronounced.

As a result, wins will happen slightly more often starting and ending on the middle row than what you’ll find with the other two rows. That’s something to keep in mind when you see the wilds and scattered bonus symbols land.

How to Win at Lost Symbols

Something really cool about this game is that they maintained both an above-average hit-rate and some pretty sizable payouts. For example, the 250x win in the bonus round would be like having a 5,000x jackpot if it was listed as a multiple of your line wager. Additionally, we want to point out that having four reels is a big part of why this works out the way it does.

Subsequently, this title has a volatility that’s a little below-average as a whole. However, with the gap between some of the bet sizes, we don’t recommend much of an adjustment. Typically, we would recommend increasing your bet size. In this instance, however, we think you should just stick with whatever you were comfortable with to begin with.

The round artifact with the red bulb in the middle gets you 5x, and the piece of the stone tablet is worth a 2x payout for four on a line. From there, the diamond, round scratched stones and vase all pay 1x when you line up four of them.

The hit-rate of the payouts in the Lost Symbols online slot is serious enough that video slot players will definitely not get bored of it despite it having four reels. Additionally, in contrast with other titles that use similar artifact-hunting motifs, this game differentiates itself with both its graphics and gameplay. Along those lines, we also like how the graphics level gives people a particularly cohesive type of gameplay instead of only being an afterthought that doesn’t really tie into the gameplay much.

The feature-centric gameplay style of this slot is centered around bringing video slot fans a ton of fun within the atypical layout. In addition to that, due to the fact that this title gives a serious level of quality while still standing out on its own for a few different reasons means it’s a great showing for Concept Gaming.

Which online casinos have Lost Symbols?

What is the Return to Player (RTP) for Lost Symbols?