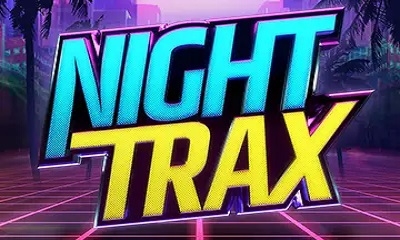 The Night Trax online slot from ELK Studios offers a gameplay experience unlike any we’ve ever seen. You can win without having to go from left to right specifically, and the nature of the symbols themselves allow different ways to get paid to open up and offer multipliers and more.

An Introduction to Night Trax

It’s rare that we see an online slot introduce new game mechanics. One reason for this is that it’s often difficult to get players interested in something too far outside of the norm. ELK Studios definitely took a chance on this with their Night Trax video slot. However, it’s looking like they figured out how to keep one foot in the box as well.

There are new gameplay mechanics and elements. However, they are so far “out there” that it’ll alienate players or be difficult to learn.

You’ll see a lot of neon arrows on the screen when you first look. This fits the futuristic retro visual style and theme of the game. These arrows also play into the game mechanics, which we’ll get into further down below.

On the gameplay side of things, this is a title that’s surprisingly easy to get used to. We really like how easy they’ve made it to get started even from the first time you play. That’s in spite of new mechanics and atypical determinations of when you win.

The format of this game isn’t all that atypical. However, it’s the execution of the game within those parameters that’s a bit different. Here’s what to expect:

As we mentioned above, the hit-rate is well above average. When you add in the balance of the features and how often they hit, this game has a low volatility overall. We’ll get into how to adjust to that further down. Additionally, all wins in this title are based on a multiple of however much you have wagered. For example, a 3x win with a €4 bet means that you’re getting paid out €12.

The feature set for the Night Trax online slot is straightforward but atypical. We’ll break down how these features work so that you understand exactly what to expect. With that said, you should expect a small learning curve on a couple of these features. That’s because they’re things that we’ve never seen before. Getting used to something completely fresh takes a little longer in most cases.

We mentioned this briefly above, but the structure of the paylines is an important feature. It also plays into other features. The basic idea is that you have to line up symbols on paylines to get wins. However, they do not have to be in any given position.

As long as the symbols are on adjacent reels, and they fall on a payline, then you get paid for them. We’re repeating this because it’s critical to understand if you want to get how the other features really work.

The clear pyramid symbol with a “W” in the middle of it is the wild. It’s very important because it’s more helpful than in most other games. This is because of the way the payline structure differs (see above).

However, they also offer some pretty solid wins on their own. Consider these payouts:

It’s worth noting at this time that every single symbol in this slot pays out for two of a kind or more. That means a wild symbol anywhere on the game board guarantees at least some two of a kind wins. That’s a pretty substantial piece of information in that it helps you to understand just how high the hit-rate is in this title.

Note also that you’ll be given the single best-payline win on each individual payline. If multiple wins are available on the same line thanks to the wilds, you’ll only be paid for the highest of the set.

If you get any winning combination on a payline of any size, it trigger the Trax Re-spins feature. In the Night Trax video slot, this feature gives free chances to add more payouts to your total. It does this by holding all symbols that are a part of winning combinations in place. As that happens, all other positions spin once again to give you a chance to add more payouts.

From there, if you extend a given payline win, or if you add a new win, then the re-spins continue. They only end once you fill the board with wins or have a re-spin with no new wins added. You’re paid once at the end of the re-spin feature based on whatever you end up with at the end.

Some of the symbols in this game are diagonal arrows. They offer a critical feature called payline splits. The way this works is that you can end up getting multipliers depending on how these wins fall.

For example, suppose you have two of the yellow arrow lined up on a payline. From the end point of those two arrows, you have a third that continues in the same direction along with another just above or below it that continues in another direction. Both of those symbols will count on that third reel, which gives you a 2x multiplier.

This can extend further to yield paylines with additional splits for additional multipliers.

The Night Trax online slot logo is the scattered bonus symbol in this game. If you get three of them on the reels at the same time, you trigger this feature. They start off by immediately each turning into a random multiplier.

You’ll start this feature with three free spins. The reels have special symbols that contain arrows, blank spaces and sticky multipliers. If you get a multiplier, it resets the number of spins you have to three. It’ll also stay on the game board for the rest of the feature.

In the top-right corner, you’ll see the total multiplier for your bonus game wins. Additionally, you can get arrows between multipliers that connect them to upgrade those multipliers by adding them together.

At the end of the feature, the multipliers are all added together. You’ll receive a payout worth your bet amount multiplied by that total.

How to Win at Night Trax

With such a low volatility and such a high hit-rate, this game lends itself to a strong betting adjustment. In the same way that you would lower your bet size when playing a high-volatility game like a progressive slot, you should consider increasing your bet size for the Night Trax video slot.

The reason for this is pretty simple. You’ll get better payouts obviously. However, you’ll also still have a reasonable resulting swing rate. An increase of about 50 percent is plenty to achieve this effect. However, going much higher than that will defeat the purpose by making the swings too much.

Other than the wilds and bonus symbols, this game only has five other paying symbols. However, they appear according to the payline type. On the horizontal paylines, you have the purple triple arrow with a 25x win for six of a kind. Six of the green double arrow pays 10x, and you can earn 6x for six of the blue single arrow.

For the diagonal paylines, there are yellow and red arrows. The yellow gets you 5x for six of a kind, and you can be awarded 3x for six of the red arrows.

The look and visual tone of this slot offers an overall feel that’s definitely different compared to what the online slots world overall has available. Along with that, this slot is a valuable part of this software company’s overall offering of online slots because of its level of graphics and style of play.

Also worth noting, if you have enjoyed playing other slots that focus on this style of driving theme, then this is one title you definitely will not want to miss out on. A serious number of features are used in this title, which is a fact players can’t necessarily say for plenty of the slots industry as a whole, and the feature-oriented play style of this slot is targeted toward offering players a serious degree of excitement.