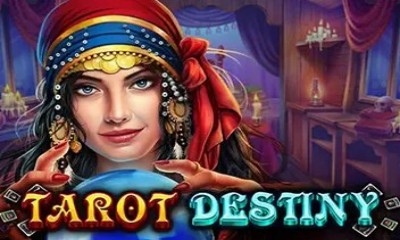 If you enjoy the esoteric, then you’ll love what the Tarot Destiny online slot brings to the table. Realtime Gaming put players in charge of predicting their own fortune, which can be some big wins in this game.

An Introduction to the Tarot Destiny Slot

The setup for this game is pretty straightforward and easy to understand. However, it’s the theme and gameplay of the Tarot Destiny video slot that sets it apart. Much like titles like Madame Destiny Megaways, you’ll see that it has a bit of a fortune teller feel to it. With that said, RTG made sure that this game stood out from others with similar concepts.

This title is based more around a specific type of tarot card reader fortune teller and less about the general concept.

When it comes to the overall look and feel, Realtime Gaming absolutely nailed the idea. Your game takes place inside of an old traveling cart of a fortune teller. A crystal ball sits on a table in the center with comfortable chairs around the edges. Additionally, you can see windows all around the three available walls. This is perfect for the fortune teller idea, and it adds a level of immersion that you don’t always see.

From there, we have the gameplay end of things. We have to say that they did an awesome job with this as well. Realtime Gaming has a history of focusing on a handful of super-solid features in their games. They didn’t really deviate from that much in this particular title either. As a result, you get an incredibly solid experience. While the regular pay table offers some good wins, the features offer bigger opportunities. Additionally, it gives the feeling of these being the two sides of the same coin. When they come together, it forms up a very solid and balanced experience.

One thing that we know from other RTG slots is that they don’t use uncommon formats much. Instead, they prefer to use layouts that players are likely to already be familiar with. Additionally, they use this as a sort of super-solid foundation to build an awesome experience on. We have to admit that this strategy has worked for them for a long period of time. Moreover, it seems to have worked pretty well here too.

The volatility level found in this title is pretty reasonable. We place it at about average, which suits most players most of the time. The reason they were able to keep it at the average level is simple. On the one hand, the regular mode has a solid pay table and a reasonable hit-rate. At the same time, the bonus features hit often enough to be interesting. When you combine those two things together, a medium volatility is generally what you get.

In many RTG titles, you’ll find that betting is based on certain numbers of coins per line. However, they kept their tendency on that with this slot. All wins are multiples of your line bet wager. For example, if we list out a 50x win with a €2 bet on the spin, the total prize is €10.

Gameplay and Features for the Tarot Destiny Video Slot

The presentation of this title is pretty strong, and it differentiates itself from other similar games like Voodoo Magic accordingly. However, where the Tarot Destiny online slot really shines is on the gameplay end of things. In particular, we really love the feature set used in this production by Realtime Gaming. Everything is all about giving players a few different ways to get paid, and they do it in an excellent way.

For the wild symbol in this game, everything is pretty straightforward. It offers good payouts, but it doesn’t substitute for either of the bonus symbols.

These wins are tied with the best payouts in the game. That’s because they’re the same as the white owl symbol. Additionally, they are collectively the only two symbols that pay for only two on a line. For every other symbol in this game, at least three of a kind are required to score a prize.

The Hold and Spin Bonus Feature

This game has two scatter type symbols that you should look out for. Both of them are involved in giving you opportunities to win via bonus features. However, the first of those we’ll look at is the crystal ball. Considering that this is a fortune telling game, it’s easy to see how critical that ball is.

In an atypical move, this symbol only appears on the center reel. When it’s full of three crystal balls, you trigger the Hold and Spin bonus.

You start off with three spins in this game. Moreover, the three crystal balls stay in place while all other symbols disappear. From there, the other reels spin, and you get a chance to add more crystal balls to the reels. Additionally, it’s worth noting that these are the only symbols that can show up aside from the golden chest, which we’ll look at below.

When any new crystal balls are added to the board, you start back over with three spins. However, those balls hold sticky in place. When the board is full or when you run out of spins, the feature finishes up.

The crystal balls each offer a small random win. However, the golden chests can offer much larger payouts ranging from 100x to 1,000x. Since these are multiplied by your total wager, it’s easy to see how this can be a value-packed feature. Additionally, Realtime Gaming included a 20x minimum payout for this bonus round.

The second bonus symbol that the Tarot Destiny video slot has to offer is actually its own logo. This symbol can appear on any of the five reels and leads to a free spins mode based on the following criteria:

Something that makes this feature stand apart is that the wilds behave differently. You collect wilds as they’re played, and each fourth adds 10 free spins. Moreover, the multiplier for the card collection feature increases each time you re-trigger. This goes up to a total of three re-triggers. However, after that, you can’t re-trigger any more.

Because this is such a generous feature, you can only get a total win worth up to 5,000 times your total bet. That’s still a pretty large win, but RTG has done this to allow the volatility for the game as a whole to be more reasonable.

How to Win at Tarot Destiny

With such a balanced play style, Realtime Gaming made this title in a way that it will appeal to most people. Since you don’t have much out of the way to worry about with volatility, betting adjustments aren’t particularly useful. In games like this with a medium volatility level, it’s best to just pick a size that you’re normally comfortable with.

If you do that, you can adjust later if you find a need to. However, most players will find that the swings aren’t severe enough to warrant much adjustment.

Tied with the same wins as the wilds, the white owl has the best payouts of any regular symbol. That’s because it awards a super strong 2,000x prize for five on a payline. Not far behind is the wagon symbol, which gets you 1,000x for five of a kind combinations. Wrapping up that end of things are a pair of symbols that score 500x for five: the purple book and the candles.

In the middle of the road are the tarot cards themselves. Four different cards can be seen on the reels. However, all four of them have the same five of a kind payout of 200x.

Similarly, Realtime Gaming made the card rank symbols easy to remember as well. With the red A, purple K, blue Q, teal J and green 10, you can win 100x for five of a kind.

In titles like Fortune Rewind with somewhat similar concepts at play, one thing we miss out on is hard-hitting bonus features. The Tarot Destiny slot brings those in a major way with the free spins and hold and spin bonuses. It’s a good pairing in that they give strong values for both. However, at the same time, they do so in very different ways.

Between the graphics, the features and the value from the regular pay table, it’s easy to see how this is a very strong showing from Realtime Gaming.

Which online casinos have Tarot Destiny?

What is the Return to Player (RTP) for Tarot Destiny?