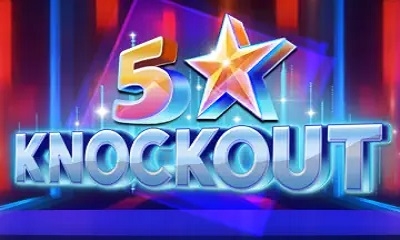 The 5 Star Knockout online slot from Northern Lights Gaming (and distributed by Microgaming), offers players a great opportunity to run up various meters and collect symbols to get extra payouts, features and additional ways to win.

An Introduction to 5 Star Knockout

It’s not that common to see completely different gameplay styles in the online slot world. Instead, we usually just see atypical formats with a lot of the same kinds of features adapted to them. However, Northern Lights Gaming definitely went with something different in their 5 Star Knockout video slot.

This game is all about symbol collection with some special game mechanics that you’ve probably never seen before.

The aesthetic appeal for this title is serious, especially considering how straightforward the theme is. Northern Lights Gaming definitely went above and beyond to make sure that players had everything they needed here for a super strong presentation. We love the red, white and blue theme and how much contrast it offers while simultaneously flowing together really well.

With the gameplay, the collection game mechanic is a big part of what’s going on. While we’ll get more into the specifics of how that works down below, the main thing you need to know is that the action is fast-paced. Additionally, you generally feel like you’re making straightforward progress toward triggering bonus features. That’s something most games don’t have available when they’re only based on pure randomness.

The layout of this game is a little larger than normal. However, the general feel and line layout is fairly common and straightforward. Additionally, the increased size of the board from the usual 5×3 helps with the way the game mechanics work. Here’s what you’ll need to know:

The volatility level for this game is smoothed out a whole lot by the mechanics. As a result of that and the balanced regular pay table, we put the overall volatility at a medium-low level. This means your swings won’t be very severe on average at all.

Payouts are described based on the total bet size. For example if you’re wagering €4 and pick up a 10x win, that’s worth €40 in this game. Additionally, we’re glad Northern Lights Gaming didn’t go with a coin-based system. We think that approach is more confusing for most players.

The feature set of the 5 Star Knockout online slot is all about symbol collection. We’ll get into how all of that works below, how it ties into the free spins and what you need to know to get started. Having this information in mind before you play will give you a leg up since you’ll know what’s going on with all of these atypical features and ways of triggering bonuses.

On any given spin, you can get up to five stars at once. These stars operate as scatters, but they also have a special game mechanic that centers around the idea of “knocking out” another symbol. When you collect these stars, they are added to random positions for each of the given symbols for the meters at the bottom of the game board.

It doesn’t matter where the stars land because they operate as scattered collection symbols. This is a key component of how the bonus feature works, which we’ll get into further down below.

A cool feature that occurs in this game is the random win spins. When you trigger a win spin, you’re guaranteed at least one payout of some size on that given turn. However, this can trigger into more random win spins one after another.

In our testing, we hit three in a row on more than one occasion. The individual wins were in the small and medium range, but they added up pretty quickly. We think this is a fun feature that gives players an extra chance to pick up random winnings in the 5 Star Knockout video slot.

On any given spin, you have a chance to be awarded a random number of bonus stars. This happens whether any stars appear on the reels or not.

The way this works is really simple. A number of random stars are added across various meters at the bottom of the game board. However, this can actually trigger a free spins mode, as you’ll see below, depending on where the stars land.

When at least one of the bottom meters are filled at once, you’ll be given a set of 5 Star Knockout free spins. You start this feature with five free spins. However, if you fill meters during the bonus round, which is easier to do than usual, you’ll get two extra free spins added to your total.

Random multipliers are given to wins in this feature. Additionally, you can pick up payouts worth up to 5 times their normal value thanks to these multipliers. As you can see, the name of the 5 Star Knockout slot has more than one meaning here.

Something worth noting is that the symbol with the meter that triggers the feature is removed from the reels. That means it’s “knocked out,” which in turn makes it easier to get winning payouts from the remaining symbols. Additionally, you can knock out multiple symbols at once, leaving only a few symbols left on the board.

How to Win at 5 Star Knockout

The feature set is all about providing a pretty steady amount of value throughout your experience. As we mentioned up above, this leads to a volatility level that’s a bit below average. This is great news for players who like a really smooth style of play without having to worry about swings.

However, not all players like this relaxing style. If you’re one of these individuals who prefers a bit more action and fluctuation, you can get it with a simple betting adjustment. Increase your bet size slightly, by somewhere between 25 percent and 33 percent, for the best results.

The end result will be a volatility that’s around average or slightly higher. However, that’s with respect to your starting bet size. While this betting adjustment is optional, it is a good choice for players who want more volatility in their play.

The symbol set of this game has a great aesthetic that feels very celebratory overall. To start with, the stylized “5” symbol with the stars around it is a part of the logo for the game and is the top-paying regular symbol. Five of a kind of this “5” yields a payout of an appropriate size at the 5x level. From there, players have three different lucky 7 symbols. With the red lucky 7, you’ll earn 4x for five of a kind combinations. However, picking up five of the white or blue sevens will pay out 3x or 2x, respectively.

Northern Lights Gaming handled the low-tier symbols in a smart way. They are card suits instead of card ranks, which plays into the idea of the features keeping a smaller number of symbols on the game board to increase the chances of hitting winning combinations. For the green club and red heart, you’ll earn 1.5x for five on a line. Additionally, a payout of 1x is yours for five of the blue spade or yellow diamond symbols.

Northern Lights Gaming produced the 5 Star Knockout video slot in a way that we think has a tremendous style of play. It’s unique in the type of experience it gives you, and the action never really quits. Along with that, it has a bright, fun and vibrant visual appeal with a strong celebratory aesthetic that we think a lot of players will feel good about.

We do want to point out that the lower than usual volatility might not be everyone’s favorite thing. However, we’ve outlined how a straightforward betting adjustment can compensate for that aspect. While this is optional, it’s a good choice for players who want more variance in their play.

Which online casinos have 5 Star Knockout?

What is the Return to Player (RTP) for 5 Star Knockout?