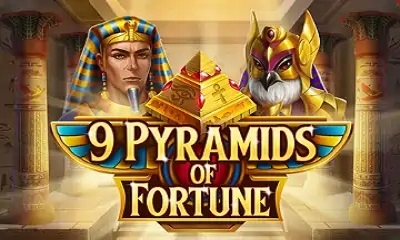 The 9 Pyramids of Fortune online slot is a title produced by Stakelogic with an Egyptian theme. However, this title stands out because of it’s action-packed gameplay. This gameplay style focuses largely around giving players tons of ways to get paid on every spin.

Casinos with 9 Pyramids of Fortune

An Introduction to 9 Pyramids of Fortune

When we see a game added to the large number of Egyptian-themed slots, we are generally skeptical. So many of them are basically rehashes of what has already been done over and over. That’s why we were really happy with what Stakelogic brought to the table with their 9 Pyramids of Fortune video slot.

This is not “just another” Egyptian-centric video slot put out there to be lost in the rest.

Instead, this game completely stands out from the rest of the sub-genre. The first way it does this is with its look. The layout of everything shows that a lot is going on in this game. However, the background and symbol set have also been created with aesthetics and visual appeal in mind. As a result, it looks great, and the characters on the reels have a tremendous amount of detail.

On top of that, the gameplay itself is very action-oriented. Along the top and left side of the reels, you see different meters that keep up with different things. This is one hint that the features in this title are pretty serious. What’s more is that they hit really often. Additionally, the variety of features makes sure that you always have something fresh and exciting that can hit.

The layout for this title is actually really easy to get used to. However, the way some of the features work can make it seem more complicated than it is. To this end, we’re going to break it down from a fundamental standpoint here to show you exactly what’s going on.

We place the volatility for this game in the medium to medium-low range. With that said, the hit-rate is a bit higher than what you’d normally expect. A lot of that has to do with the features being set up in a way to generally provide value pretty often.

With the 9 Pyramids of Fortune video slot, players have plenty of features to enjoy. However, the main gameplay is driven by only a couple of them. The others are more along the lines of bonus rounds that only hit occasionally. With that said, you’ll want to learn what the meters are on the screen before you get started. This will just make your experience with this title have a lot more clarity.

The first symbol that you should pay attention to is the golden scorpion. It shows up on a green background, and it is the wild symbol in this title. It offers the best regular payouts of the game (tied with Cleopatra). Additionally, those wins are along the following lines:

When you get these wilds on the reels, they assist you by giving you wins you would have otherwise missed out on. However, the way they are evaluated for substitution is important. Each payline will evaluate the wilds independently. As a result, sometimes a wild will count as two different symbols for two different wins.

This wild substitutes for all other symbols except for the scatters.

On each one of your spins, you have a chance to activate the avalanche feature with a win. All wins give you the avalanche feature. The basic idea is that your winning symbols disappear. From there, the empty space is filled by new symbols that fall down to fill out the grid. Once the grid is full again, you have new opportunities for additional payouts.

However, in the 9 Pyramids of Fortune video slot, a twist is put on this feature. This twist comes in the form of multipliers. At the top of the reels on the left-hand side, you’ll see a multiplier meter. This starts off at 1x for the initial spin. However, it increases by one for each subsequent avalanche on that spin. It maxes out at 5x and will stay there until the series of avalanches is over. At that point, it resets back to 1x for the beginning of the next turn.

The golden pyramid on the red background is one of the two scatters in this game. You will collect these scatters during your spin across avalanches. However, the meter for these resets when you start a new spin.

If you’re able to collect at least three of these during the initial spin and subsequent avalanches, then you trigger the Pyramids of Fortune win. The current multiplier is applied to this payout as well.

The free spins symbol is a golden scarab. You’ll notice that it has blue and red trim as well. This is a scattered bonus symbol that appears on the game board. You can have a maximum of one appear on each reel during a spin and subsequent avalanches. They are collected during your avalanches, however, and getting four or more will take you to a wheel feature.

This wheel determines two pieces of information. The first is the number of free spins, which can range from eight to 15. Additionally, the starting multiplier will be determined. This can range from 2x to 6x.

The starting multiplier determines where the multipliers in the top left corner for the avalanches begins counting. For example, if you pick up the 4x, then the values will start at 4x and will increase across to 5x, 6x, 7x and a maximum of 8x. It’s important to realize that this value shown is not a multiplier applied to all of your wins. Instead, it only manipulates the value of the initial multiplier for the avalanche feature.

How to Win at 9 Pyramids of Fortune

It’s very important for players to understand the Super Stake side bet. This is because it manipulates the volatility a bit.

However, it’s critical to point out that in this game, the side bet is not necessary. You’ll have the same RTP percentage with or without it being activated.

What the Super Stake does is double the size of your wager in exchange for chances at a special Super Stake feature. In essence, you’ll keep the RTP the same while increasing the volatility.

If you’re playing with the Super Stake feature, then we put the volatility around average. However, without it, the volatility falls below-average. Whichever of the two you wish to play with is up to you: It’s a matter of taste. Again, they have the same payout percentage rate, so there is no inherent advantage of one over the other.

Payout Structure for 9 Pyramids of Fortune

Aside from the wild, the best-paying symbol in this game is Cleopatra. She awards players 100x for five of a kind combinations. You can also score 40x for five of the pharaoh symbol. Lining up five of bird or jackal will get you a 20x payout as well. These four characters have a ton of detail in how they are drawn, and we love the overall look.

The low-tier symbols are different sigils that are important in Egyptian mythology. The gold and red emblem pays out 6x for five, and that’s the same as the golden circle. Additionally, players can earn 3x for five of the Eye of Ra or of the green feather symbols. These payouts are all for five of a kind combinations.

Something slot fans will really enjoy about this video slot is the padding that the plethora of features add to your overall winnings. On top of that, the name of the game is action with this game, and that’s awesome for video slot fans who need an exciting type of gameplay.

Along with that, we seriously love how the level of graphics gives video slot fans a more cohesive style of play as opposed to just being a formality. As a part of this software developer’s selection of games as a whole, this is a title that holds a key position since it appeals to a lot of people, and in contrast with other games with related concepts, this game differentiates itself in a handful ways compared to just being one in the same.

Which online casinos have 9 Pyramids of Fortune?

What is the Return to Player (RTP) for 9 Pyramids of Fortune?