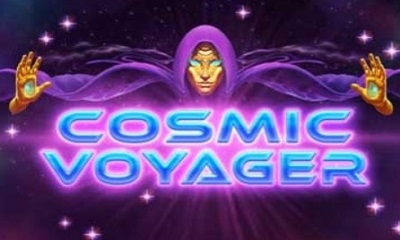 The Cosmic Voyager video slot from Thunderkick offers an exciting style of play. With 10 paylines and a lot of features, this is a title to check out if you like action. The cosmic theme is a lot of fun as well, and it’s a bit out there as far as space-themed titles go.

An Introduction to Cosmic Voyager

If you like eccentric games with atypical themes, then the Cosmic Voyager online slot is something you should check out. Thunderkick made sure that this title didn’t fall into any of the common tropes when it comes to slots.

Instead, they stepped outside of the box quite a bit and offer something different instead.

Now that’s not to say that they just threw a bunch of silly stuff together that makes no sense. The game is very cohesive and coherent with how it’s put together. Both the theme of the title and the gameplay game together in a way that makes sense as well.

As far as the feature set and gameplay go, they offer a lot of action. The features themselves are a little atypical. However, the pay schedule has clearly been set up to offer players a lot of ways to get paid. It succeeds in that to a great degree, and the high hit-rate is proof of how that works.

While the theme is a bit different here, the layout is pretty straightforward. You’ll have a really easy time jumping in and getting started with this game. Here’s what to expect:

A few other things need to be mentioned as well. First off, all of the wins are multiplied by your bet size. That means payouts scale proportionately to how much you’re wagering overall. Second, the hit-rate is pretty nice here given that only 10 paylines are used. Finally, the volatility is fairly low despite the value that the features bring. The hit-rate is a big part of why that is the case.

If you like action, then you’ll love the gameplay style of the Cosmic Voyager online slot. Multiple features are set up to hit fairly often, so you won’t generally have to wait several sessions before you hit the features that this game has available, which is a problem with a lot of the competition.

The logo symbol for this game is a purple diamond shape. It offers a whole lot of value because it generates wins in two ways.

This symbol acts as both a wild and as a scatter symbol.

The scatter also appears on all five reels, so you can end up getting a lot of value from its payouts. You can get the following wins from scattered combinations of this symbol:

They don’t have to appear on any particular reels, positions or lines to award these scatter payouts. Instead, they’re true scatters in the traditional sense, and they pay no matter where they show up.

Something really important to know is that the wild payouts and scatter payouts are calculated separately. That means you can end up getting two different payouts from these logo symbols on the same spin.

The wild payouts are as follows:

The wilds all substitute to give the best possible payout on a per-payline basis. That means if they could be used to make a non-wild combo on a payline that’s larger than the wild payout by itself, then it will. In short, you’ll always be given the best wins available, but you only get one per line. That is in addition to any scatter payout.

Symbols frequently show up stacked in this game. If you fill the entire first reel (far left) with a matching stacked symbol, then you trigger the Expanding Symbols feature.

For this feature, all symbols that match the symbol on the first reel will expand to cover their entire reels. That means that winning combinations will all be multiplied by a factor of 10 for all intents and purposes since you’ll pick them up on all 10 paylines.

If you get at least three of the scatter anywhere on the grid of the Cosmic Voyager online slot, you get a set of 10 free spins.

During this free spins mode, you’ll get a variation on the expanding symbols feature. If you get a full stack on the first reel of medium or high-tier symbols, multiple extra stacks will appear on the reels at random. This adds to your chances of getting winning combinations. It also boosts the sizes of your payouts when you do win.

As a result, these free spins are worth quite a bit more than their normal counterparts.

How to Win at Cosmic Voyager

The volatility of the Cosmic Voyager video slot is on the low end of the spectrum. As a result, you can adjust a bit by changing your bet size.

Since the swings are already pretty minimal thanks to the low volatility, you can use larger bet sizes to adjust. If you want to adjust in this way, we recommend an increase of 40 to 60 percent over your average.

The idea here is that you’ll get larger wins because your bet size is bigger. However, you won’t be subject to swings that are as severe because the volatility is lower overall.

The low-tier symbols in this game look like differently colored planets. They award payouts that start at 15x and go down to 10 for five of a kind combinations on paylines.

The fun in the Cosmic Voyager online slot is absolutely amplified by the degree to which the atypical style of graphics fits the game’s driving concept. Additionally, the hit frequency of the selection of features in this video slot is large enough that slot players will be sure to not get bored of playing.

This online slot is a strong part of this developer’s overall selection of titles because of its aesthetic appeal and gameplay experience, and if you’ve liked other online slots that use this type of overall concept, then this is a game you definitely will not want to miss. Additionally, the style of play with this game brings a whole lot of action.