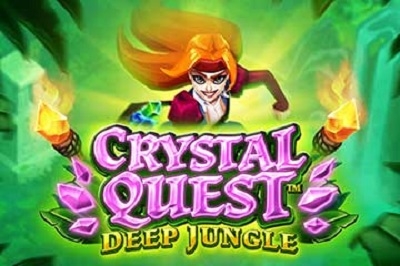 Thunderkick’s Crystal Quest Deep Jungle online slot takes players into a magical place deep into the jungle with several interesting characters with a gem-based motif. A fast-paced style of play with thousands of ways to win on each spin, free spins and more is waiting on you with this title.

If you’ve been around the online slot world for a while, you’ve seen some of the same types of themes used quite a bit. While something like the jungle has been used a lot, Thunderkick has done something completely different with it in their Crystal Quest Deep Jungle video slot.

Combined with a gem-based motif, this slot takes you into an action-packed experience with a whole lot of ways to win on each turn.

The graphical aspect of this game cannot be denied. There are several cool creatures on the reels along with gems and other symbols that look tremendous. The background is interesting as well and looks like there’s actually something about to jump out to surprise you from the tree with the fog and other details that bring it to life.

The gameplay is strong as well with an emphasis on lots of small and medium wins and a pretty high hit-rate. There are multiple features available to enhance those wins, and we’ll get more into that down below.

The format of this title is at the heart of how it plays the way it does. The action is serious, and the hit-rate is particularly high. Here’s what to expect:

The volatility is obviously going to be low with a game with this type of hit-rate, but that’s even more the case because of the way the features work and how balanced the pay table is. Overall, this is one of the online slots of the modern era that we have seen that has the lowest volatility out there without being just flat-out boring. They’ve tempered the general lack of massive swings with an exciting play style to keep things fun.

In the Crystal Quest Deep Jungle online slot, it’s the feature set and the way it helps you to get extra wins that keeps things so interesting with the low volatility. We’ll walk you through those features and show you what you need to know before you get started.

The very first thing you’ll probably notice on the gameplay end is that all wins give you an activation of the Avalanche Feature. This works much like others do from other games: When you get a winning combination, after you’re paid, the winning symbols disappear. More symbols fall into the space left behind, and you get more chances to get paid with new winning combinations.

This can go on and on, so you can have multiple avalanches in a row off of the back of the same paid spin.

There are multipliers attached to the Avalanche Feature as well. The multiplier starts out as 1x on your regular spin to start things off, and each avalanche activation will increase the multiplier by a factor of one. This means that if you run up just a few avalanches in a row, you can see a pretty sizable multiplier that will make even small wins substantial.

It’s worth noting that this feature gives you more value than you might expect because there are 4,096 ways to win, which makes it much easier for falling symbols to be parts of wins.

The mystery symbol in this game looks like it has purple glowing gems, and it shows up anywhere on the game board. At the end of your regular spin, they will all turn into the same randomly chosen symbol to make it easier to get winning combinations.

The only restrictions here are that they cannot turn into the scatter or the wild symbol.

In this bonus feature, you’ll also have the ability for two scatters on the game board to add three more free spins with each additional scatters adding two more.

There are two special actions that happen during the free spins that make them worth more than regular spins. First, the multiplier does not reset between spins, so avalanche multipliers can really add up to turn your last few free spins into something extremely valuable. Additionally, if you have a wild available on the screen with no wins, it will explode to clear out the reel and row it’s on to give you a free shot at the avalanche feature for more wins and increased multipliers.

How to Win at Crystal Quest Deep Jungle

The extremely high hit-rate is the hallmark of the Crystal Quest Deep Jungle video slot. Generally speaking, the way to adjust to a game with such a low volatility and a play style like this is to increase your bet size. Different players will feel different levels of comfort with this, but we recommend something in the range of an increase of 40 to 60 percent on top of your normally sized wager.

Alternatively, you can just go with a bet that’s at the upper end of the range you’re comfortable with. The idea here is that your wins will be worth more, but you’ll still be largely protected from the swings because of the super low volatility.

The gorilla with the golden crown earns 20x for six of a kind. Note that this is the only symbol in the game that will give you a payout for just two of a kid (other than wild combinations for obvious reasons). You can pick up 5x for six of the purple snake holding a staff as well.

The gem symbols give payouts based on their colors. You can win 1.8x for six of the large gold or 1.6x for six of the green. The large blue one and large purple give 1.4x and 1x, respectively. The small gems pay from 1x to 0.8x for six of a kind combinations also.

If excitement is the thing you’re after in your sessions, then you’ll totally fall in love with the gameplay that the Crystal Quest Deep Jungle online slot brings to your sessions, and the presentation of this title is exceptional and enhances the entire style of play. This game is a valuable component of this company’s whole portfolio because of its graphics level and gameplay experience.

The pay rate of the selection of features in this title is large enough that slot fans will certainly not get bored of it. Along with that, if you have been a fan of other titles that feature this style of driving concept, then this is one game you will not want to miss out on.