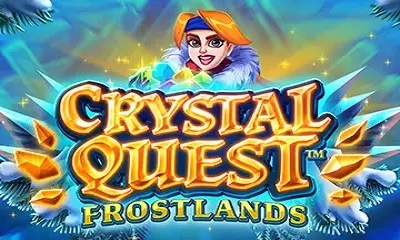 The Crystal Quest Frostlands video slot from Thunderkick is all about action. It has a lot of features that hit frequently and a generous pay table. The graphics look amazing as well as you explode a winter-themed high fantasy landscape.

An Introduction to Crystal Quest Frostlands

The Crystal Quest series from Thunderkick offers adventure in a ton of different locations. With the Crystal Quest Frostlands online slot edition, players are taken into a frozen land.

The theme holds up pretty well between the features, the gameplay style and the visual presentation. It’s definitely a title that looks great and plays well.

When you first take a look at this game, you’ll know that it’s up there in aesthetics. In fact, we’d put it on par with anything that the industry as a whole has to offer visually. The characters were created with a high level of detail, and the background looks tremendous.

On the gameplay end of things, the action is super serious. The gameplay style is all about a lot of winning spins and plenty of chances to win multiple times on the same spin, and that’s where the feature set comes in to complement the format itself. Overall, the entire game is geared in the same direction creatively. This gives it a cohesive feel that you don’t always get from other slots.

With this title, the layout is a really important part of what’s going on. It’s not hard to learn, but it is a little different than most of what’s out there just in sheer scope. Here’s what you can expect:

In the same way that bets are based on total amounts per turn, winning amounts are simplified as well. Instead of dealing with coins, coins per line and other complications, it’s made easier. All of your wins are just a multiple of your bet size as a whole. That makes it really easy to know what you’re getting paid for any given bet size.

The gameplay of the Crystal Quest Frostlands online slot is about lots of action on every spin. You’ll have thousands of ways to win, first and foremost. However, those ways to win are increased in value by the features that make it easier to get paid. Additionally, they make it so your wins can be larger when you do get paid.

This dynamic creates a very exciting style of play. It mixes both the feature set and the format and regular pay table to create something special.

The main feature that so much of this title centers around is the Avalanche Feature. This will trigger super often during your sessions. That’s because it triggers every single time that you get any type of win at all on the game board.

Here’s how the Avalanche Feature is triggered and how it functions. You start off by having a winning combination on the game board. It pays out normally, but then the symbols that made up the combination explode. This creates space where new symbols fall into place. After those symbols fall, you’re given another chance to get wins. This process repeats until no wins are available.

If that was all, it would still be a great feature. However, there’s still more to it. Every time you get an avalanche, the multiplier on your wins increases by one. This can increase over and over with no available maximum. Two avalanches gives you a 3x multiplier for wins on the next fall and so on.

You want to see as many matching symbols as possible in this game. That’s especially the case if they’re on adjacent reels. However, that only happens so much naturally during your gameplay. To help with this, the Crystal Quest Frostlands video slot offers a different way of making it happen.

This comes with the Massive Symbols feature. The basic idea is that these massive symbols can show up as 2×2 or 3×3 version. They will cover all four or nine, respectively, positions on the reels. Subsequently, this can lead to some pretty sizable payouts.

It’s important to note that these massive symbols can show up in both the regular game and the free spins.

The blue and gold chest with a red gem is the scatter symbol. If you get three or more, you’ll pick up a set of free spins. Additionally, the number of free spins is determined by the number of scatters used to trigger the feature.

The key thing that makes the Crystal Quest Frostlands video slot’s free spins special is the multipliers. From the avalanches, you’ll get multipliers that typically reset once that turn is over. However, in the free spins feature, this multiplier never resets and carries over from one spin to the next. As a result, players can end up with some pretty high multipliers. This is especially the case at the tail end of the feature.

Another special mechanic is in place in this feature as well. At the end of a spin, when no more avalanches are available, you get another chance sometimes. If any wilds are on the reels, they explode and take a number of other symbols with them. This gives you another free chance at additional avalanches. However, this also means additional chances to increase the multiplier.

How to Win at Crystal Quest Frostlands

This title’s style of play is all about a high hit-rate. The volatility, however, is in the medium-low range. For players who like to make strategic adjustments, this offers an interesting option.

In online slots with a lower than average volatility, you have the option to slightly increase your bet size. The medium-low volatility will keep the swings from being too much. However, your increased bet size in the range of 33 to 50 percent more than normal will give you better payouts. This is compounded by the feature set.

The lower level symbols are different colors of rune-shaped gems. Those payouts range from 0.7x to 0.5x for six of a kind combinations.

If you have enjoyed other online slots that center around this kind of fantasy theme, then this is a title you will not want to miss. As if that wasn’t enough, a serious number of extra features are used in this title, which is something we can’t assume for much of the competition.

Additionally, if fun is the thing you’re seeking out, then you’ll 100 percent love the style of play that this game offers to the table. Since this game offers a serious degree of quality while still standing out individually, this online slot fits perfectly in this software developer’s offering of slots overall, and the fun is absolutely driven up by the awesome degree to which the level of graphics is suited for the overall concept.