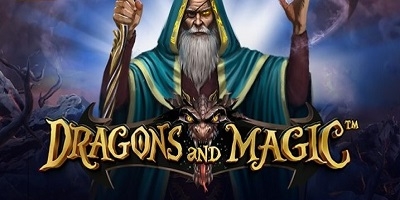 Stakelogic’s Dragons and Magic online slot brings players into a dark and mysterious woods where you will find dragons and warlocks on the reels helping you to get some very serious payouts. The occult feel is very heavy in this 243-ways game with the ability to expand reels for even more ways to get paid.

An Introduction to Dragons and Magic

Most of the slots in the industry that have some type of fantasy theme come at it from a lighthearted and fun approach. While there’s nothing wrong with that, Stakelogic decided to go into a different direction with the Dragons and Magic video slot.

This game has a very dark feel to it, and the themes are not light in nature at all.

You can really see this visually as well. The potion symbols, wizards, dragon eggs and more are all very dark and foreboding, and while they don’t push the player away, they are only inviting in terms of their aesthetic appeal.

This title plays like action is the most important thing in the world, and that fits the overall theme pretty well also. The hit-rate is strong thanks to the format, and the plethora of features help to keep things exciting as well.

In a title like this where the layout has the ability to expand in certain cases, understanding how the format works on a fundamental level is pretty important. Here’s what to expect:

The volatility for this title is in the medium range. The hit-rate being fairly high keeps it from getting out of hand, but the features offer so much value that it does pull it up a bit. With that said, it’s balanced enough that virtually all players will find it palpable, and it’s not extreme in one direction or the other.

This is a feature-rich title for sure. In the Dragons and Magic online slot, you can expect a lot of ways to get paid and a lot of ways for extra value to come at your way through the feature set.

The blue dragon’s eye is the wild symbol in this game. You can get them on all five of the reels. Additionally, five of a kind will pay out 12x, but that’s a bit misleading since you’ll get other winning combinations using those symbols as well to say the least.

With the Super Stake feature activated, players can pick up wild multipliers as well. These will work in increments of 2x, 5x or 10x, and when you have more than one multiplier in the same winning combination, their values are added together instead of multiplied.

Like most games, these wilds do not substitute for scatter symbols, but they do help you to pick up a ton of extra winning combinations that otherwise would not have come your way.

Other than the wild multipliers noted above, there are two other features that you can only get when you have the Super Stake activated for double the bet size.

Each of these two features can trigger at random, and that means that you’ll have extra value falling into your lap randomly when you have the Super Stake wager turned on.

The fiery dragon egg symbol is the scatter in this game. It is a bonus symbol that awards free spins, but it does not offer any payouts on its own. Here are the wins you can expect with this symbol:

During the bonus round, you can add more free spins to your total by getting three or more along the above lines. These scatters award free spins no matter where they land.

When you’re in the free spins bonus round, you get an extra feature that drives home a tremendous amount of value. Every single scatter you get, no matter how many scatters are on the game board, will increase their respective reels by one symbol in height up to a maximum of six symbols per reel.

Three other dragon egg symbols (blue, purple or green) can appear during the free spins. They show up on the middle three reels only. The feature you get depends on how many dragon eggs appear on the game board. For example, a single dragon egg will increase the size of the respective reel just like a regular scatter.

However, two or three activate the Dragon Fire feature. You’ll have wilds added to the reels, and all reels have their height increased by one. Like all other height increases, this will last for the duration of the free spins bonus round.

How to Win at Dragons and Magic

The Dragons and Magic video slot has a medium overall volatility, and that’s increased slightly by the Super Stake feature. We do recommending using the Super Stake, which doubles your bet size, while simultaneously lowering your base wager so that this double bet size is more in line with what you would normally bet.

The reason for this is simple: You get a lower RTP percentage (ie: payout percentage) if you don’t use the Super Stake wager.

Payout Structure for Dragons and Magic

The dragon head pays out 12x for five of a kind, which is the same as you get for five wilds. It’s also the only symbol that always pays for just two of a kind, which adds a good amount of small wins to the pay table with the all ways format in play.

The wizard drops down to 5x, and you can get 3.2x for five of the magical ring. The rabbit’s foot is the last mid-range symbol in this game, and it’ll get you 3x for five.

Five of a kind combinations of the red potion will pay 2x. You can also earn 1.6x for five of the yellow, green or blue potions.

We absolutely love the aesthetic appeal of the Dragons and Magic online slot. Its visuals are only matched by its intense gameplay, which includes layers to its features and lots of extra ways to get paid at random. Overall, it’s a very strong game with a medium volatility and a play style that will appeal to a lot of people.