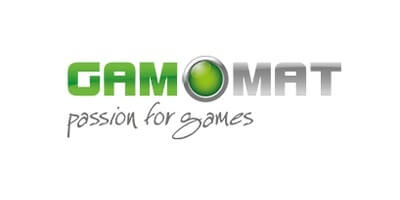 Gamomat is a Germany-based game and software developer successful in providing slot games, jackpots and bonus machines and casino equipment for land-based gambling venues. For years, the company focused mostly in the land-based industry, until recently when they decided to expand their line of business onto the online casino industry. Though fairly new to the iGaming market, the company has recently gained popularity across the globe, becoming one of the largest manufacturers of real and online casino games as of today. Discover the unique Gamomat casinos gaming offers and learn more about their passion for online casino software development.

Being in the industry for quite some time, Gamomat takes pride of their games and gaming products, made with the highest technology and quality, which feature amazing sounds and graphics tailored for desktop computers and portable devices like smartphones and tablets. The company is operating under Malta Gaming Authority license and their products were tested by BMM, one of the leading testing laboratories in the iGaming industry.

Gamomat games are developed in HTML 5 which permits them to put slots on several online services that make their games globally accessible. Their games are available on desktop, mobile, tablet, and in apps which are modified to different devices. Gamomat games are categorised into four different sectors: land-based, online, mobile, social and jackpot. The jackpot is still in the development stage and their first release has not yet been launched. Most of their games are top performers in their own category. They have tons of game to choose from which make them popular among gamers. They have over 260 games and each game has its own unique theme when it comes to sound effects, graphics, and music.

To ensure fairness to all players, Gamomat uses Random Number Generators (RNG) which is certified by an independent and established gaming testing laboratory, the BMM Testlabs. All their games are approved and regulated in the VLT, Casino and AWP sectors and licensed under Man Gambling Commission, Malta Gaming Authority and Schleswig-Holstein. This means that Gamomat games are reliable, safe, and trustworthy where all players can be assured of a fair play.

Gamomat has more than 260 casino games in their portfolio, which are all regulated and approved by AWP, Casino and VLT sectors, offering players reliable and trustworthy online casino venues. Video slots are classified by date, series, and structure.

Most of the Gamomat slots game fall under this category. Some of the outstanding classic games are Wild Rubies, King of the Jungle, Magic Stone, Black Beauty, Wilds Gone Wild, Wild Rubies and a lot more.

The common bonuses in Gamomat slot games are free pins, expanding symbols, and the double up feature, which are quite flexible in terms of themes. The games are inspired by traditional fruit machines, fantasy, animals, mythology and ancient history. Below are some of their most popular slot games.

The game is a part of the series of the first edition of Books and Bulls which was launched in 2016, while this was released in February 2018. The game pattern is almost similar to Ramses. It has the Fire Bet that initiates the Red Hot Firepot Jackpot feature and the three ovens will display on the screen. The Firepot Draw fills up the meter with a definite number of collected points once the three ovens lit up causing to generate any of the six jackpot (Silver, Bronze, Iron, Copper, Gold, and Jewel).

This slot game was launched in January 2018; since then it became popular in the online gaming industry. The players instantly have the chance to maximise winning potential unlocked with an additional bet, which triggers the Golden Night’s bonus feature. In this bonus, the players can win one of the jackpots (Silver, Bronze, Iron, Copper, etc), which the cash prize is to be determined by the level of the thermometer.

This slot was also released in 2018. It’s a video slot with 5 pay-line and is fantasy- themed. This game has medium to high volatility and ten bonus rounds to be unlocked with Ouija Board Scatter. If you are lucky enough, you have the chance to double your winnings through its gamble feature wherein any icon can become a special bonus symbol preceding to the Free Spins session.

This slot game is also part of the Golden Night and Red Hot Fire Pot series. This slot guides you on a journey in the fantasy world. In this game, you can get free spins once the crystal ball appears on the screen. The crystal ball has five reel game, five win lines and magic symbols on the reels including Wizards and Amulets. Possessing two of these symbols entitles you to win amazing prizes such as the Wild Symbol which can give you bigger profits.

This slot game is based on the Ancient Greek myth, The Minotaur. It’s a horrible creature feeding off humans and living inside a custom-built labyrinth. It’s a slot with five reels and thirty win lines. In this game, there are essential symbols such as the King and Queen and the Minotaur that can give you big credits. The Scatter Temple found in this game gives you the chance to win ten or more free spin rounds. The gamble and split option are also available in this game wherein you can split your winnings and gambling to 50% of the total amount.

Book of Romeo and Julia

This game was launched in 2016 and was based on the tragic love romance in history. Romeo and Julia are the two main characters with high-value symbols. What triggers the spin session and the random bonus icon to boost payout is the Scatter, along with the three other symbols on connecting reels. Every time a new scatter combo lands on the reels, extra spins will be added.

To date, Gamomat is not yet offering live tables and casino games. That is something to be awaited in the future as they are still growing and improving their business.

Gamomat Development GmbH is among the most successful independent owner-managed companies developing real money games on the international stage. Since 2008, they have developed innovative games for Gamomat casinos, online and mobile devices at their creative hub located in Berlin, Germany. Founded by Dietmar Hermajohannes, the company has an outstanding history of developing slot games for traditional land-based casinos. Thanks to their amazing video slot collection, Gamomat enjoys great reputation, becoming one of the well-known names in Germany.

With years of relevant experience in the gaming industry, the developers were able to easily visualise the needs and wants of online casino players. Gamomat software provides highly reputable gaming products that are carefully designed, featuring excellent graphics and amazing sounds with a lot of bonus features. HTML5 and Flash Players are implemented in Gamomat software, which makes them available across many platforms and browsers. Furthermore, their games are available in thirty-four countries and are supported in different languages like English, German, Russian and Spanish.

Today, Gamomat Development GmbH has nearly 40 employees and has released more than 260 game titles. The company has proven to be reliable and competent operating under Isle of Man Gambling Commission, Malta Gaming Authority, and Schleswig-Holstein licenses, advancing the way of software developers in Germany.

The company is now enthusiastic in expanding their line of business reaching out to the international markets such as Australia, Canada, Russia and USA. For the past 8 years, they have been working on overseeing, exploring and transitioning into the online gambling industry. Gamomat, unlike the more established and prominent names like Microgaming, is still working on building its online casino portfolio, and despite being fairly new to the online industry, the company has been able to attract worldwide players because of its impressive gaming library.

Gamomat Development GmbH has been on the rise since its transition into the online gambling world. After signing a deal with another online casino software developer, Oryx Gaming, they have gained even more experience in building their content for social, mobile as well as online gaming.

Gamomat Development GmbH holds several eGaming licenses issued by the United Kingdom Gaming Commission and Malta Gaming Authority. The company’s head office is located at Maybachufer 48-51, Berlin, Berlin 12045, Germany. They can be contacted via phone at +030 290226670.

If you want to reach them by e-mail, you can send it to info@gamomat.com

Gamomat is a Germany-based game developer specialising in online casino games as well as traditional casinos worldwide. They have over 260 games that you can enjoy playing in most online Gamomat casinos. It was founded in 2008 and mainly focused in making traditional land-based games, but in 2013, they decided to enter the online games industry and never looked back.

Gamomat develops software games for online and traditional casinos. Their games are being played in most casinos all over the world, whether real or online. They do not interact with the players since their client is the casino itself.

How can I win at Gamomat casinos?

Gamomat games are popular thanks to their high Return To Player ratio and engaging bonuses. Their games are tested by one of the most trusted testing laboratories in the iGaming industry, BMM. All of their games are Random Number Generator tested to ensure fairness and randomness.

Where can I find Gamomat slots?

Gamomat slots are available in over 20 gaming online sites all over the web. Gamomat games can be played in popular online casino sites as well as small industry players in the net.

Just like many of the well respected names in the iGaming Industry, Gamomat prides itself for being compliant to all the industry regulations and protocols. Duly licensed by Malta Gaming Authority, players can be assured that each game is created with fairness and randomness in mind. It is tested and audited by industry accredited third parties to ensure regularity and compliance to standards.

What is the best Gamomat casino?