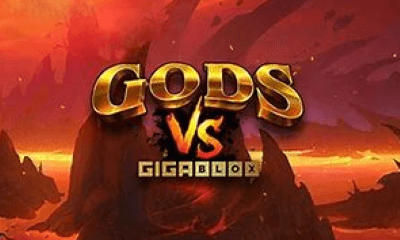 Who will reign victorious in this epic battle of Gods vs Gigablox from Hot Rise Games? Discover colossal symbols, wilds, multipliers, additional spins and more besides, in this highly volatile slot. Our Gods vs Gigablox slot review will explore the gameplay, bonus features and payouts for this earth quaking game.

Casinos with Gods vs Gigablox

An Introduction to Gods vs Gigablox

A formidable collection of mythological Gods prepares to do battle on this 6×6 grid layout. Play begins on the backdrop of a heavenly arena with clouds floating by. The palatial buildings are shrouded in a bluish haze whilst the reels are framed in decorative ancient steel.

However, trigger the Free Spins or Versus Battle to enter what looks like the depths of hell. The backdrop turns a fiery red with bat skulls framing the reels and molten liquid surrounding the earth humps. Gods and Challengers stand either side of the reels preparing to do battle.

Watch out for heavenly rewards as the epic battle between Champion and Challenger takes place. Discover win multipliers and instant cash prizes whilst spinning for that 10,225x maximum payout.

Visually, the graphics for the game are stunning, demonstrating the artistic flair of casino software developer Hot Rise Games. In the background a befitting soundtrack plays which engages your interest. The Gods vs Gigablox volatility is considered high therefore it may take some time to land those bigger wins.

On the reels you will encounter Kitsune, Ares, Sun Wukong, Anubis, Medusa and Thor, these are the premium symbols. Four playing cards make up the lower value symbols. A gold crown represents the wild and ‘vs’ is the scatter. You will also come across the letters ‘V-E-R-S-U-S’ which trigger one of the bonus rounds.

As with many online slots, the game’s free spins bonus round can be triggered by landing scatter symbols. We will explore these in more detail further down the page of our Gods vs Gigablox review. But for now let’s take a look at what the main game has to offer:

These symbols can randomly land during any spin in the main game or bonus rounds. Gigablox can appear as 2×2, 3×3, 4×4, 5×5 or 6×6 screen filling symbols. If it forms part of a win, the symbols will break down into 1×1 blocks for win evaluations.

During the main game any symbol can land in the form of a Gigablox. But when it comes to the free spins or VERSUS feature, only Gods will appear as Gigablox.

If you cannot wait to organically trigger the VERSUS feature, then for 100x your bet you can enter it immediately. It’s worth noting that this option may not be available to all markets.

The most common symbols to appear on the reels are the playing cards. These are considered low value symbols and include a red A, gold K, purple Q and blue J.

Scatters have the letters ‘vs’ emblazoned upon them. Five of these will award the Gods vs Gigablox free spins. However, land the six letters which spell out ‘versus’ and you’ll trigger the feature round.

Wilds are the golden crowns and can substitute for all other symbols except the scatters. Not only do they substitute but they will also award a payout for landing three or more. Land six on the reels for a rewarding 30x your bet.

By landing five or more scatters on the reels you will trigger the Gods vs Gigablox free spins round. Eight spins are awarded and the highest paying, most in view deity symbol will turn wild.

If an equal amount of two deity symbols is displayed, then the highest one is chosen. If no deity symbols are present on the reels then Thor will automatically become wild.

Should you land a further five scatters on the reels, you’ll retrigger the feature.

Spelling out ‘versus’ across each reel from left to right will trigger the VERSUS Feature. You are awarded six free spins. A Champion and a Challenger are randomly chosen from the six deities to commence battle.

Every time a Champion or Challenger symbol lands, it is collected in the respective meter on either side of the reels. These collected symbols can award wild multipliers, extra free spins, symbol multipliers, wilds and instant cash prizes.

You cannot trigger the free spins during the feature, nor can the VERSUS bonus be retriggered.

How to Win at Gods vs Gigablox

Lining up three or more symbols on adjacent reels across the active paylines will constitute a win. By landing Gigablox symbols in both the main game and the free spins rounds you’ll create further winning combinations.

Wilds will substitute for all other symbols and also payout when you land three or more. Five scatters will trigger the free spins bonus and by landing the letters in ‘versus’ you’ll activate the feature round.

Playing the Gods vs Gigablox demo game will give you the opportunity to experience the bonus features and gameplay risk-free. Register at one of the recommended regulated casinos found on this page. Not only can you play the game for free, but you’ll also pick up a great bonus.

Payout Structure for Gods vs Gigablox

When playing at real money casinos, it’s crucial to know which symbols will offer those worthwhile payouts. Norse God Thor heads up the paytable and awards up to 15x your bet.

The other deities pay a maximum of 6x. With the lower paying card symbols you can expect up to 1.5x for landing six on the reels.

High Rise Games have clearly stepped up a gear with the Gods vs Gigablox game. It has all the charm of its predecessor, Monsters vs Gigablox but with so much more to offer. The visuals are still as striking and bold but the Gods are way bigger.

There are two free spins modes, one is more traditional whilst the other reflects the innovative creativity of its developers. One slight downfall would be that the main game doesn’t have a lot going for it aside from the Gigablox symbols.

However, trigger the Free Spins or VERSUS feature and watch those earth shattering wins fall. There’s a steady 96.00% RTP on this highly volatile slot with a maximum win of 10,225x.

Does Gods vs Gigablox have a free spins feature?

Yes. You can trigger the free spins game by landing five or more scatters. Eight spins are awarded and the highest paying picture symbol in view turns wild.

What is the Gods vs Gigablox volatility?

The Gods vs Gigablox volatility is regarded as high, so there may be a slight delay between those bigger prizes.

What is the max win of Gods vs Gigablox?

There’s a maximum win of 10,225x your bet on the Gods vs Gigablox game.

Can I play Gods vs Gigablox for free?

Yes. By registering at one of the top-ranked casinos on this page you will be able to play Gods vs Gigablox for free. This is an ideal way to fine tune your gameplay and strategy.

Who makes the Gods vs Gigablox slot game?

High Rise Games is the developer behind Gods vs Gigablox. The game incorporates Yggdrasil Gaming’s innovative gaming mechanic Gigablox, and is distributed through the ReelPlay platform.

Can I play Gods vs Gigablox on my mobile or tablet?

Yes. Gods vs Gigablox is fully optimised and so will adapt to any size screen without compromise. It is compatible with all leading operating systems to include Android and iOS.

Which online casinos have Gods vs Gigablox?

What is the Return to Player (RTP) for Gods vs Gigablox?