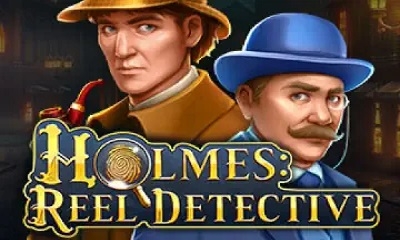 Kalamba Games has brought Sherlock and Watson to life in their Holmes: Reel Detective online slot. You’ll play across over 4,000 ways to win with multiple free spins and additional features. The hit-rate is also super high here with plenty of ways to win with just two of a kind.

An Introduction to Holmes: Reel Detective

We love seeing online slots based on timeless classics in literature. The Holmes: Reel Detective video slot from Kalamba Games definitely fits into that group. It follows Sherlock Holmes and his assistant Watson on a tremendous adventure.

The dark and gloomy feel of this title is something that we don’t often see either.

The presentation of this game is absolutely amazing. You’ll find yourself situated on a dark and rainy street looking down a row of buildings and shops in a late evening or early night scene. Along with that, the symbol set used has been handled with a whole lot of care. The level of detail put into even the card rank symbols is outstanding, and it’s something we wish we saw more of in the industry as a whole.

In terms of gameplay, they knocked it out of the park. You can get multiple free spins modes as well as chances for some pretty serious multipliers. That’s on top of the fact that the format is set up to give you a really high hit-rate. Lots of symbols pay for just two of a kind, and in this type of layout, that’s not exactly common. In any case, the excitement of the play style combined with the gloomy presentation is the perfect combination here.

When you first take a look at the reels, you’ll notice that there’s a lot going on up above them. However, you can actually ignore that since it’s only used for the features, which we’ll get into down below. Instead, here is what you need to know before you get started about the format:

The hit-rate is boosted quite a bit from having a lot of two of a kind wins in this game. That drags the volatility down a bit from the boost it gets subsequently from the features being so value-packed. Overall, they were able to achieve a pretty balanced style here with a medium volatility as a whole.

We also really like how Kalamba Games makes their payouts so clear. They list the actual currency amount instead of obfuscating it with line bet wager wins and the like. In the following, we’ll describe wins based on multiples of however much you’re betting for simplicity’s sake.

To say that there are a lot of features in the Holmes: Reel Detective online slot would be the understatement of the year. However, it’s not really difficult to learn all of the game mechanics and bonus features. To help you out with this, we’ll break everything down piece by piece in the following.

With 4,096 ways to win, wild symbols definitely help out a lot. They have a cool, spooky look to them like someone is shining a light on water at night. These symbols will substitute for every symbol in the game other than the magnifying glasses, the fingerprints and the bonus scatter.

However, it’s important to know that they also only appear on the middle four reels. Because of this, they cannot give you winning combinations on their own. That’s okay in this game, however, because of the huge amount of value they give otherwise.

On the far right reel of the game, you’ll frequently see magnifying glasses show up on the game board. After each spin, they will move one spot to the right over the top of whatever normal symbols landed on the reels.

When they land on a position that has a fingerprint symbol, however, they will give an instant payout. The payout amount is listed with the magnifying glass as it moves across the game board. However, not that when it finds a fingerprint, it will pay out before disappearing from the game board.

Something worth noting is the multipliers on the top-right corner of the game board. These are also tied to the magnifying glass wins. If you get more than one of this type of win simultaneously, then you’ll have the corresponding multiplier applied to those wins. It’s 2x for two, 5x for three, 20x for four, 50x for five and a massive 200x for six matching payouts.

Two free spins modes are used in this game. One is for Holmes, and the other is for Watson. However, as you play through the regular mode, you’ll see a number for each mode increase in the top-left corner. This is how many free spins you’ll be awarded if you trigger the respective mode.

Each of these are triggered by getting three of a kind or more of the corresponding Holmes or Watson scatters. Additionally, these scatters pay the following prizes:

Additionally, two or more of the respective scatter will add additional free spins ranging from two to 15 at a time. This is on top of the same payouts listed above.

During the free spins modes, the values attached to the magnifying glasses increase each time they move. They can get to up to six times the original value in the Watson free spins. However, in the Holmes free spins, it can go up 15 times the normal amount.

The HyperBonus in this game allows you to force a free spins mode. Within the Holmes: Reel Detective video slot, Sherlock Holmes is the main character, so it makes sense that his more valuable style of free spins are the ones used here.

Additionally, the following four options are available along with their respective costs.

The RTP percentage of these modes are slightly different than each other as well. The more spins you buy at one time, the better the value you receive.

How to Win at Holmes: Reel Detective

When it comes to the volatility of the regular game mode, it’s pretty average. You’ll have a fairly high hit-rate with features that drive some pretty tremendous payouts. As such, the swings aren’t too serious on average because of the above-average number of small and medium wins you’ll pick up.

However, if you use the HyperBonus option to buy free spins, we suggest lowering your base wager. This will help to keep things under control because the volatility of this option is much higher than the regular game mode.

In the lower portion of the pay table, however, you need at least three of a kind for wins. The yellow A and red K both pay 2x for six of a kind. However, the win is 1.6x for six of the green Q, teal J, blue 10 or purple 9 symbols.

The set of features includes a number of various extra ways to take down a win on top of the normal pay schedule, and they all fit the Sherlock Holmes theme perfectly. The overall theme is used in a particularly cool way in the Holmes: Reel Detective online slot, compared to it only being an afterthought like what players see in most slots. Additionally, the graphics level and aesthetic appeal of this title brings an overall look that’s up there with the best you’ll find anywhere. We absolutely love how gloomy it feels.

The gameplay style is extremely centered on action with a tremendous amount of opportunities to hit serious payouts, largely due to the fingerprints feature. It’s a perfect feature in that it’s always active, hits often and can lead to the occasional massive prize.

What is the Return to Player (RTP) for Holmes: Reel Detective?