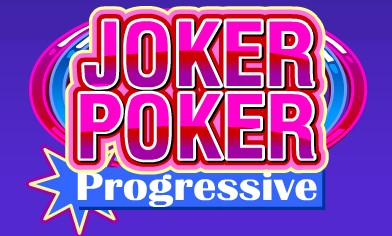 In the progressive Joker Poker game by iSoftBet, players get a style of play that is somewhere between the typical non-wild and wild experiences all while having a chance to trigger the top progressive jackpot. All you need is a natural royal flush to hit this top prize, which means it hits more often than progressives in most other titles.

iSoftBet has a set of progressive video slot titles that give you a different type of experience than what you’d normally get. It’s a solid setup that gives players the strategic gameplay of the video poker genre while giving you the chance-based excitement of taking down a larger prize than you’d normally see in this type of game.

These two factors come together to give players a different style of play than usual, which is why a lot of people flock to games like the Joker Poker Progressive.

In terms of visual appeal, there’s a clean layout that shows exactly what you need to know without a bunch of extra bells and whistles. The suits are displayed front and center to help make it much more difficult to mix up spades and clubs or hearts and diamonds, which can cut into your bottom line even if it doesn’t happen all that often.

This game has been made really straightforward and simple on the betting front. You can wager from one coin to give on each hand you play. Along with that, you can choose a minimum of €0.01 to a maximum of €1 for each of those coins. This gives the title a minimum bet size of just €0.05 per turn with all five coins activated, and you can bet up to €5 per hand as well. The idea here is to give all players a chance to experience this title regardless of their bankrolls or betting comfort levels.

Something that is worth noting and that’s actually really important for players to know is that you will always want to have five coins going on every single hand. That’s even if you have to pick a smaller coin size to get down to a bet size that you’re comfortable with. This is because there’s a higher RTP rate for doing so, which means better payouts, and a big part of that is the fact that you can’t qualify for the progressive unless you have a bet of five coins.

We have a number of things that we feel players will want to know about the Joker Poker progressive video poker game from iSoftBet. Some of these are specific to this software developer in particular, and that means you’ll really want to pay attention here instead of just assuming that this is like every other Joker Poker title on the market because that’s very much not the case.

Notably, the Joker Poker style has the usual 52 cards with an additional 53rd card that’s a wild joker that will be used for the card that will maximize your payout on the game’s pay table.

Virtually all video poker software providers these days will give you strategic recommendations on which cards to hold. You’ll have these recommendations show up in this progressive Joker Poker game as well, and while that seems like a good thing, there’s one issue.

iSoftBet is well-known in the industry for not always giving the best recommendations when it comes to those holds.

We don’t think that this is some intentional thing meant to push the player into making mistakes. Instead, we think that these recommendations are generally good, but there are a number of spots where they are not the best strategies available.

Since the autoplay option will use these recommendations for holds, you need to understand that you will get a sub-par payout rate for using the autoplay mode. However, if you aren’t incredibly solid when it comes to Joker Poker strategy, then you may feel as if you’ll make a similar number of mistakes, and it won’t make that big of a difference to you as a result.

With most progressive video poker games, you’ll have a few smaller payouts on regular hands that are then compensated for at the top of the pay table with larger prizes. This is the case with the Joker Poker progressive jackpot game by iSoftBet. While we’ll get into the details of the progressive jackpot further down below, it does have an important place on this overall pay table.

The key thing about this is that Joker Poker traditionally comes in multiple forms depending on the worst hand that pays out. In this title, it’s a pair of aces, so you do have single-pair hands that can help you to get winning combinations. However, there are some strategic changes that you’ll need to make along these lines.

For example, if you had something like AA884, then most people will automatically discard the 4 and keep the AA88. However, because a pair of aces and two pair have the same payout, there’s no benefit to doing so. Instead, you should only keep the pair of aces so that you get three chances to improve to three of a kind.

Triggering the jackpot in this game has two requirements:

The first thing many people will wonder is how is this made fair if people at different levels of stakes are competing for the same jackpot with the same winning conditions. The answer is that the jackpot is scaled to be a portion of the overall prize pool based on your bet size, and this keeps the wins proportional to each other to keep things fair for players at different stakes.

The jackpot itself is always listed in the top-right corner of the game. It will fluctuate over time based on how many people are playing and what size wins are happening on the jackpot. The order of your royal flush’s card does not matter, which is unlikely some of iSoftBet’s other progressive video slot games where it does matter.

How to Win at iSoftBet’s Joker Poker Progressive Video Poker

The easiest way to keep your RTP rate as high as possible in this title is to always make sure that you’re playing with five coins. Without that, and no matter what the actual size of the coins are, you will not qualify for the progressive.

From there, you’ll also want to make sure that you have a solid foundation in Joker Poker strategy, particularly for the aces or better version. There are kings or better and two pair versions as well with slightly different payouts at the bottom end of the pay table, and those strategies obviously won’t be ideal for this particular version.

As for strategic adjustments for dealing with the progressive, you don’t actually need to make any. A typical aces or better Joker Poker strategy will have you playing perfectly virtually 100 percent of the time except in very rare, fringe cases that aren’t that important to worry about because they hardly ever happen.

The progressive Joker Poker video poker game by iSoftBet is one of the best Joker Poker titles out there in the industry as a whole. The top payout is always worth quite a bit, and if you play long enough, you’ll eventually hit a royal. This progressive has a much better chance of being hit than most slots, so it’s a much more attainable kind of goal for players who really love strategic titles like video poker.