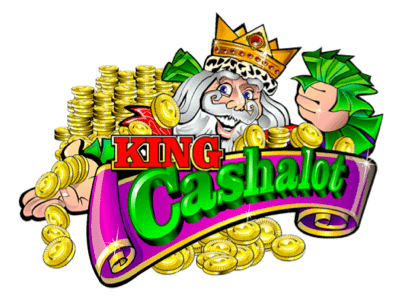 King Cashalot is a long-running progressive video slot by Microgaming that centers on a playful rendition of the legends of King Arthur. The top prize pays out at least six figures at all times in this game, and you’ll find that it has quite a few features as well. This helps to round out the gameplay to be super exciting instead of only being centered around one way to win. Read  this review to find out how to win and compare casinos with the King Cashalot slot.

When you’re a company like Microgaming that’s been around since the mid-1990s, you end up having a huge catalog of games that have older styles of graphics. The gameplay can persist over time, but it’s difficult to make the graphics in a way that will hold up 15+ years later.

Microgaming’s King Cashalot slot has graphics that look a bit older, but they’re still very much serviceable, and that gameplay has held up in a strong way for more than a decade.

The bottom line with this is that you aren’t really going to be playing this game because of how it looks, though the graphics aren’t really ugly or bad, just old. Instead, you’ll be worrying more about the progressive jackpot and the other ways to win some pretty significant payouts that you’ll find on the pay table and through the feature set that we’ll look at below.

Progressive slots like this one have been historically best received when they use pretty standard formats, so it’s not that surprising that you’ll find a fairly straightforward game structure here:

What you’ll actually find here is that this layout is a formula that Microgaming used with a lot of their early video slots back when nine-payline games were still pretty popular. Players seem to prefer more “even” numbers in the modern era, so the more comparable new releases have 10 paylines instead, but the gameplay is fairly similar in terms of giving players a lot of action.

The King Cashalot online slot uses several features to give you an overall feeling of lots of wins and lots of excitement coming your way. The volatility is obviously pretty high because it has a big progressive attached to it, but some of these features help to increase the hit-rate and keep that volatility down as much as reasonably possible.

King Cashalot himself in his crown and red tunic is the wild symbol in this game. He shows up on each reel, and he helps you to get extra wins you would have missed out on otherwise. He’ll substitute for any symbol in the game except for the treasure bonus dragon or the scattered court jester, which we’ll look at down below.

He also gives some pretty solid wins just for winning combinations on his own, which is outlined here:

What’s more is that when at least one of this symbol is a part of a regular winning combination, it will double its value. For example, five queens normally pays 1,000x, but it would become 2,000x if at least one King Cashalot wild symbol was in the combination.

A golden dragon makes an appearance on the middle three reels. This is a scatter symbol, and if you get all three on the reels at the same time, then you will activate the Treasure Bonus feature. The basic way this works is that a number of chests will be shown that you get to pick from, and the payouts are essentially based on multiples of the total amount you have wagered.

These payouts add to whatever payline and scatter wins you picked up from the same spin, so it’s an extra added value that you would have missed out on otherwise. We like this type of feature here because it adds what’s basically a random win that’s pretty sizable to the upper part of the pay table.

In an older era of video slots, it was common to have scatters that only gave payouts without triggering a feature. You don’t see that so much in the modern era, but you do see it in the King Cashalot progressive slot.

There are four different payouts that you can win with this symbol:

You’ll find two things that make these payouts more appealing than they might initially seem. First off, they are multiples of your entire wager instead of just your line bet payment. This means that the 50x scatter win would be comparable to a 450x line bet prize, which is substantial to say the least.

The way to win this progressive jackpot is actually pretty straightforward. You’ll trigger this win when you get five of the King Cashalot wild symbols on the ninth payline. One side effect of this is that you have to have all nine paylines activated to qualify for the jackpot, but other than that, there is no minimum bet size required.

With that having been said, your chances of hitting this particular prize will be scaled with your bet size, so a wager of €45 will have 10 times the chance of hitting the progressive than a wager of €4.50, for example.

This jackpot always starts out at the €100,000 level. From there, it will increase until someone wins in. The largest payout for this jackpot ever has been in the neighborhood of €1.5 million, so it’s definitely a prize that could change your life if you’re lucky enough to nail it down. The average payout tends to be around €600,000, which is still a huge amount of money.

How to Win at King Cashalot

There are really two things that you need to know to maximize your chances of winning at this game via increasing your return to player percentage as much as possible.

The first is to make sure that you always have nine paylines activated and in play. The number of coins on those paylines and the size of your coins don’t really matter in terms of this, but having all lines active allows you to win the progressive jackpot since it only triggers due to wild symbols filling up the ninth payline. Without this, your overall payout rate will suffer tremendously.

Next, feel free to adjust your bet sizes to something that you’ll be comfortable with over longer sessions. Playing with smaller bets and more spins more session will lower the volatility while maintaining roughly the same overall chances of winning the big progressive jackpot. A lower volatility means that the swings aren’t as bad, and you stand less of a chance to have your account balance wiped out or significantly diminished by a losing streak.

A big advantage to the King Cashalot video slot over other progressives is that the pay table is much more balanced with wins at all levels compared to what you’d normally see. On the upper end, five of the wild symbol gives a win of 15,000x, but there are pays in the range of 1,500x to 500x as well for other high-level wins. These are larger than the top payouts in many other slots, so they’re worth noting.

Generally speaking, the people in this game are high-level symbols. This includes the king and queen along with a knight in golden armor, a redheaded princess and the scattered jester symbol. For the lower end of the pay table, there are a variety of food symbols like big hams, turkeys, seafood, fruit and desserts.

With this game, we think that there are a lot of pros and cons in terms of what most players will like and what some players might not care for. We want to present both sides of this issue so that you can decide for yourself if it’s something that you’ll want to check out or not.

Here are the highlights of what this game has to offer:

With all of that said, there are some things that might not appeal to everyone, and we want to include those points here:

While it’s clear that there are certain types of players who won’t care for this slot, that’s the case for all games, and King Cashalot isn’t special in that regard. However, it is a title that has historical significance in the progressive slot genre, and it still has a bit of a following after all of this time.

If you’re interested in the history side of the online slot genre, the King Cashalot video slot is a game that you could probably get a lot of interest from because of how long it’s been around and how many other games it has influenced. We really like what it brings to the table from that perspective, and it’s not exactly a secret that it’s made several millionaires over the years.

Which online casinos have King Cashalot?