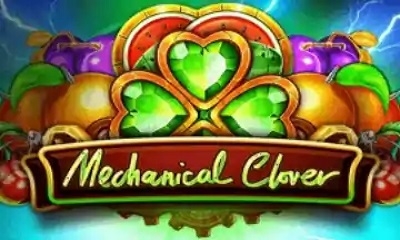 The Mechanical Clover online slot from BGaming offers a crossover between classic and video slots. While it uses a three-reel format, it plays like video slots do. The features are very innovative, and the entire approach to the game is different than most.

An Introduction to Mechanical Clover

Something we really like to see in the online slot world is innovation. However, there’s a problem with being too innovative. If you go too far outside of the box all at once, it can be very alienating for the player.

BGaming clearly understands this. That’s why they handled the Mechanical Clover video slot the way they did.

Even though this is a three-reel game, it’s still a video slot in how it plays and is presented. The graphics are tremendous with great-looking symbols taken from a steampunk world. Some classic ideas like fruit symbols are there, but they’re done in such a way that they stand out with nothing else out there that’s similar enough to compare them to.

On the gameplay end, video slots are marked by a frequent rate of wins and in-depth features. This title includes both of these things and more. Overall, it being so different is interesting because it still presents such a familiar style of play. The only real difference, so to speak, is the packaging that the game comes in.

Because of the atypical way that this game is set up, understanding the format is really important. Before you get started playing, you should know how the layout works and how it changes in the bonus round. Here’s what to expect:

Wins in this game are described in coins. It’s assumed that you’re wagering five coins per spin, even when the format changes. To determine your coin size, divide your total bet size by five. For example, if you have a €1 bet size, then your coins are worth €0.20 each.

We would also like to point out that the volatility in this game is low. A lot of that is because of the format setup being so atypical. However, the payout distribution from the pay table is also a big part of it.

For the Mechanical Clover online slot, the feature set is a little outside of the box. That makes sense in the context of getting as much as possible out of the 3×3 format. With that said, it also gives more gameplay depth than what you’d generally expect from a three reel game.

The name of the game is actually tied to the wild symbol. It’s a steampunk themed clover that substitutes for any symbol in the game. As a result, it definitely helps to get extra wins that wouldn’t have been had without it.

With this wild, the key thing to know is that it doesn’t have its own winning combination payouts. This is because it will only make an appearance on the middle reel. With that being said, it does offer a lot more value than you’d expect, especially in the feature.

The wild clover symbol doesn’t just help you to get wins you would have otherwise missed out on. It also triggers the key bonus feature in this game.

To trigger the re-spin feature, you need to get the wild on the center position of the third reel while it helps to make a winning combination.

Since there are only three positions on that reel, it means that you’ll have a one-third chance of triggering this bonus feature every single time that a wild lands on the reels. That’s a pretty good chance considering you only need one symbol to get the re-spin feature. This is different than many other games where at least three scatters are required.

Two things happen to make this feature different than the regular spins. First off, it becomes an all ways format game. That means there are 27 ways to win on every spin. This works by giving you winning combinations no matter which positions the symbols land on. If you have matching symbols on each of the three reels, you’ll get a win for it. This change in the game’s format is a gold mine for the wild symbol, which becomes even more valuable.

The second change is shown in the glass in the bottom-right corner. This is an escalating multiplier that starts at 2x. It increases by one for each re-spin, and you can have up to six re-spins. That means that the multiplier can get up to the 7x level.

The way these re-spins work is that all symbols that match the initial win will stay in place. From there, the multiplier on those wins increase similarly.

We usually don’t point out gamble features since most players know how they work. However, the one in the Mechanical Clover online slot is a little different.

The basic premise is similar to what you’ll see in the industry in general. You’ll have one card shown and four to choose from. If you choose a card that beats the shown one, then you’ll double your winnings.

For example, consider playing this double or nothing game once with every win under a set amount. The end result would be the same average payout rate. However, the volatility would increase a bit. This can be a good option for players who like this game but who want a higher level of volatility.

How to Win at Mechanical Clover

With the volatility down at such a low level, and with the hit-rate so relatively high, an adjustment is possible. The nature of this adjustment is to get better wins by increasing your bet size slightly. Something around an increase of 50 percent is fine. Going to as much as a 75 percent increase is also okay, but we wouldn’t recommend doing more than that.

What this will do is give you better payouts while keeping the swings pretty sizable. Note that you should not mix this strategy for the double or nothing strategy that increases volatility. That’s an approach that we noted above as an option for players who prefer higher volatility games. However, it should not be mixed with increasing your bet size.

The pay table for this game comes in three main tiers. There are definitely differences between the higher level and lower level wins. However, it’s a balanced enough pay schedule that you won’t have to worry about the swings being bad at all.

Dropping down from there are the bells and fruit symbols. You’ll notice all of these symbols, including the fruit, look more mechanical and machine-like than usual. The bells pay 40x, and the watermelon, lemons, oranges and plums each pay 20x.

Finally, you’ll earn 5x for three of a kind of the cherry symbol.

Because of the serious appeal to a lot players, this title has a valuable position in BGaming’s portfolio overall. It’s also worth noting that something players will really enjoy about this video slot is the extra value that the range of features add to your winnings.

We seriously love how the aesthetic appeal gives people a seriously intense gameplay experience as opposed to only being a formality, and the concept put into play as the center for this video slot is a solid springboard for the gameplay and excitement. Also worth noting, if action is the thing you’re looking for in your sessions, then you’ll 100 percent love the gameplay style that this slot offers to the table.