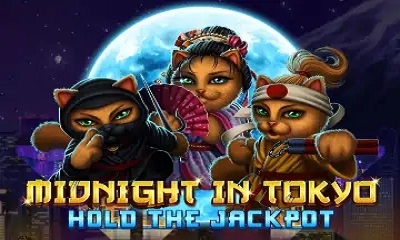 The Midnight in Tokyo online slot from Wazdan gives players lots of ways to customize their experience. You can select volatility levels as well as game speed levels. On top of that, there are multiple bonus features and a really strong pay schedule in this title.

Casinos with Midnight in Tokyo

An Introduction to Midnight in Tokyo

Customization is something that you don’t really get to see a lot of in the online casino space. However, Wazdan has done something a bit atypical with their Midnight in Tokyo video slot. You get multiple ways to customize your experience within certain bounds.

These options really accentuate the experience formed by the features and regular pay schedule.

The theme of the game is really fun in and of itself. There are different fighting cats on the game board that help you to get more ways to win. A bright night scene of Tokyo is shown in the background as well. Along with that, a lot of Japanese symbols and imagery is found on the game board.

The gameplay style is strong as well. Features are tied into the theme of the game in a really strong way. Moreover, you’ll have lots of ways to win based on the starting format of the title with more ways to win that can be opened up thanks to the way the feature set works. Overall, action is the name of the game even within the bounds of the customization options.

With the base format, you get a lot of ways to win. Those number of ways to win can change, which we’ll cover down in the features. Here’s what to expect for the base game, however:

The volatility levels in this game can be manipulated with the betting options. Additionally, you can manipulate the game speed accordingly. There are three options for each, so you can actually have nine separate game modes depending on your preferences.

We don’t think any one set of options is better than the others. However, you will want to adjust your betting to your volatility selection. We’ll show how to do this further down below.

With the Midnight in Tokyo online slot, players have plenty of features to look forward to. There’s a lot of excitement found in these features as well. That’s due in part to the fact that most of them aren’t really particularly common. In any event, the rate at which those features hit can vary somewhat depending on your volatility selection. However, it’s worth noting that some of them are easy to get regardless.

In what follows, we’ll break down the features that you’ll want to know about before you get started.

Two different fighting cats show up on the game board. The cat in black is a ninja, and the one in yellow is a karate fighter. They are both wild symbols, and they’re both very important in this game. However, they function a bit differently.

With the ninja cat in black, the adjacent symbols horizontally are split in half. That means that two of them occupy the same space as the one before, though they are split so that there are two on the same reel. Likewise, the karate cat in yellow does the same thing for the vertically adjacent symbols.

This changes the number of ways to win for that spin. It also makes it easier for the player to win multiple times with combinations for the same symbol.

These wilds also have payouts on their own as follows:

The wild cat symbols substitute for all of the regular symbols in the Midnight in Tokyo video slot. However, they do not substitute for the bonus symbols or the moon symbols.

The cat holding a fan is the bonus symbol. It does not show up on every reel and only makes an appearance on the first, middle and last. This takes you to a second screen with a different set of reels.

You start with three spins. Each time a symbol sticks, the number of spins is reset to three. This continues until you run out of spins or until you fill the game board with symbols. All of the symbols give a variety of instant wins. However, it’s also possible to get the grand jackpot of 1,000x or the major jackpot of 150x. This grand jackpot is the largest payout available in the entire game.

How to Win at Midnight in Tokyo

The key adjustment that you’ll want to make in this game involves adjusting to however you choose the volatility. With a medium volatility, pick a bet size around the middle of the range that you’re typically comfortable with. If you switch to a low volatility mode, you can increase your bet size. Likewise, switching to a higher volatility means it’s better to drop your bet size a bit.

In this way, you can really customize how you want to enjoy this slot. It’s a level of customization that we rarely see, so it’s something we’re obviously all for.

Payout Structure for Midnight in Tokyo

The pay structure for this game is largely based on coin-shaped symbols. The pink flower gets you a 10x win for five of a kind. From there, the red owl is worth 5x, and the green tree gets you 2.5x for five of a kind combinations. The blue koi fish, which many people don’t know is a type of carp, pays 1.5x for five.

From there, we have four card rank symbols in a similar color scheme. This cool Japanese-inspired font offers payouts of 1.2x and 9x for five of the purple A or green K, respectively. The purple Q gets you 0.6x for five. Finally, five of a kind combinations of the blue J will earn you a win of 0.4x.

This game is a strong component of this developer’s whole portfolio because of its graphics level and gameplay. As if that wasn’t enough, the name of the game is action with this video slot, and that’s awesome for video slot fans who prefer an action-oriented play style.

The excitement is only enhanced by the overwhelming amount to which the level of graphics perfectly fits the overall theme, and the set of features incorporates a variety of different additional ways to win prizes alongside the typical pay table offering. As if that wasn’t enough, if you’ve been a fan of other games that use this style of overall concept, then this is a slot you won’t want to avoid.

Which online casinos have Midnight in Tokyo?