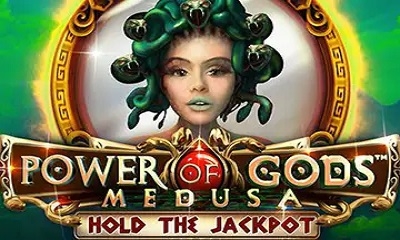 The Power of Gods Medusa video slot is a game powered by Wazdan. It takes players deep into the story of one of the most interesting characters from Greek mythology. Additionally, you get lots of ways to get paid on the regular pay table and with special bonus features.

Casinos with Power of Gods Medusa

An Introduction to Power of Gods Medusa

If you’ve been around the slot industry for long at all, you’ve probably seen plenty of Greek mythology-themed titles. The Power of Gods Medusa online slot is one of those, but Wazdan handled it in a way that makes it stand out from others in the sub-genre.

The major way they achieved this is by jam-packing the title full of features.

The feature-based gameplay will be the main focus of the overall experience for most players. However, the regular pay table still offers some pretty good values as well. This creates an overall style of play that brings regular action without a lot of long dull moments. As a result, it’s a style of gameplay that players of all kinds can get into.

With that said, the Medusa-based theme is handled a bit differently as well. Instead of having a lot of famous characters from Greek mythology, it’s instead centered largely around the ones that actually matter in her story. Additionally, the features are handled in a way that make sense for the story as well. All of this comes together between the game’s concept and play style to create a very immersive experience.

Another thing we like about this title is that they went a little bit of a different way with the format. Instead of just going with an “all ways” approach or several dozen paylines like with what’s trendy, they went with a solid but older style. Here’s what to expect:

Despite the high number of features, this game is incredibly balanced in terms of payouts. As such, we rate this slot’s volatility in the medium-low range. Likewise, we rank its hit-rate as a bit above-average, which could be surprising since it only has 10 paylines. In any event, this isn’t really much of a limitation in practice on how things pan out in this title. With that said, you do have options to manually adjust the volatility, which we’ll cover further down below.

When it comes to the Power of Gods Medusa video slot, a lot of the gameplay is centered around the feature set. With so many features, we want to make sure that players know what they can expect. Along these lines, we have breakdowns of everything you need to know in the following. This will all help you to know what could be coming your way so that you can get started on the right foot.

It makes sense that Medusa is the wild symbol for this title. She shows up in a golden frame on all five reels to make it easier to get winning combinations. However, she also gives some of the best regular payouts of any symbol in the game. Here are the payouts you can earn with this symbol alone:

As is standard in the industry, Medusa does not substitute for the bonus symbols. However, with that aside, she substitutes for anything and everything else. That means that she’ll help you to get a lot of payouts that you wouldn’t otherwise pick up.

Additionally, Wazdan has set things up in a way that one wild can substitute for multiple symbols on different paylines. The way this works is that each line is evaluated on its own no matter what’s happening on other lines. This means that a wild can substitute as one thing on a given line and as something else on another line in certain situations.

The shield of Pericles, which looks like a round mirror with gold trim, is the bonus symbol. It’s important because it was the key to killing Medusa in the story. If you get at least six bonus symbols on the game board at once, then you’ll trigger the Hold a Jackpot Bonus feature.

However, not all bonus symbols act in the same way. Some of them have special numbers shown on the bottom. This makes them sticky and makes it easier to get more of them on subsequent game rounds. Additionally, since they are taking up space on the reels, you’re given free re-spins to get these extra chances.

If you trigger the Hold the Jackpot Bonus, the reels completely clear except for the bonus symbols used to trigger the feature. Additionally, you’re given three re-spins to start with. Each of them have a chance to add new bonus symbols to the game board. Any time you get at least one new bonus symbol, it will stick in place, and your number of re-spins resets back to three.

This is the main feature of the Power of Gods Medusa online slot. You’ll continue playing until you fill the board up with bonus symbols or run out of re-spins. For each of the bonus symbols, you’re given an instant payout that can be from 1x to 15x your total bet size. However, you can also earn the four jackpots.

These jackpots are static and are not progressives. Here are the jackpots you can pick up:

The major, minor and mini jackpots can be won multiple times in a single bonus round. However, the grand jackpot can only be won once per feature by filling all 15 spots on the reels.

How to Win at Power of Gods Medusa

Something important to note is that you have an option to change the volatility of this game. The control for this is the symbol with three peppers on it to the left of the spin button. The “medium” option actually gives the game a volatility that’s slightly below average. Likewise, the other two options are a bit lower and higher, respectively.

What slot fans will really enjoy about this video slot is the additional padding that the selection of features add to your overall winnings, and this online slot is a perfect entry into this developer’s whole portfolio because of its visual appeal and gameplay experience. Everything centers around action with this game, and that’s great for players who would rather have an action-packed style of play.

The overall theme is used in a really intelligent way in this video slot, which is opposed to it just being a small part of the slot like what you see in the majority of games. We also want to point out that we really love how the aesthetic appeal gives you a more intense style of play instead of only being an unimportant part of the slot.

Which online casinos have Power of Gods Medusa?

What is the Return to Player (RTP) for Power of Gods Medusa?