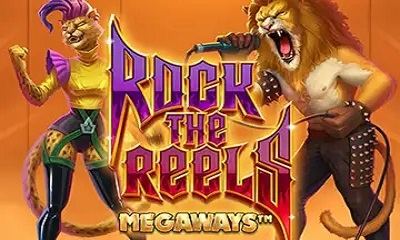 The Rock the Reels Megaways online slot centers around a rock band made up of a variety of animals. This is done in a fun style of animation, but it’s not “cartoony” and corny at all. Instead, the action is as serious with their music as it is on the reels with tons to offer.

Casinos with Rock the Reels Megaways

An Introduction to Rock the Reels Megaways

The idea of basing an online slot around a rock band has been done before several times. In fact, some developers have entire series based around the idea. What Iron Dog Studio did with their Rock the Reels video slot is a bit different, however.

Instead of basing this game around an existing band, they created their own. What’s more is that they put a bit of a twist on the concept by making them animals. However, they didn’t do this in a way to be funny or cute.

From the presentation side of things, we think the setup of the band is very impressive. Each member of the band has a done of character and a very serious edge. Iron Dog Studio honestly did more with this concept than we would have thought possible. The reels are set so that they’re happening on stage in front of a large crowd as well.

The gameplay for this title is tremendous as well. We really like the high level of action that the format and features create. Many of the features are based on the characteristics of each individual band member as well. This creates a serious degree of immersion and cohesiveness that we love to see.

With such a serious theme, it’s great that Iron Dog Studio used such an action-oriented style of play. This fundamentally comes down to the format at the most basic level. Here’s what to expect:

The format itself leads to a pretty high hit-rate. Additionally, you will have a medium-low volatility in this game. That comes down to a combination of the above-average hit-rate and the balanced pay schedule. It’s also important to note that every win in this game is based on how much you’ve wagered. For example, if you have a €2 bet with a 5x win, that’s a €10 payout overall.

The feature set for the Rock the Reels Megaways online slot centers around giving players lots of ways to win. However, there are also some bonus rounds available as well based on the band members. We’ll walk you through all of this and show you everything you need to know to get the most from this game.

Players will have access to two different wild symbols in this game. During the regular game mode, you’ll see the regular wilds in blue. They show up on the second and third reels only. Additionally, they cannot make an appearance on the horizontal reel.

It’s worth noting that these wilds cannot substitute for the scatters or special symbols. However, they can substitute for everything else. Moreover, their positions on the second and third reel make it easy for them to become part of winning combinations.

There are a few band members that offer special features just for showing up on the game board. They can all appear on the horizontal reel only. We’re going to take a look at each of them and what they do here:

These symbols doing what they do is a great example of integrating a game’s theme into the gameplay.

Scattered red guitar symbols can make an appearance on the board in any position. The number of scatters you get determines your number of free spins along the following lines:

You can re-trigger with more scatters during the free spins. They will give you additional free spins based on the following values:

How to Win at Rock the Reels Megaways

The volatility for this game is pretty reasonable in the medium-low range. With that being considered, the traditional adjustment for below-average volatility slots is to slightly increase your bet. That’s the suggestion we’re going to go with here as well.

You don’t want to overdo it, however. Go for something in the range of an increase of 25 to 33 percent if you decide on this strategy. You’ll get better payouts, but you’ll also still have pretty reasonable swings because the volatility isn’t very serious at all. While this is a completely optional betting adjustment, there is important reasoning behind it.

The Rock the Reels Megaways video slot symbol pays out 150x for six of a kind. It’s also the only symbol in the game that gets you a win for just two of a kind. That’s especially noteworthy since a lot of wilds appear on the second reel to make that happen more.

From there, the green speakers are worth 60x for six. You can also pick up six of a kind of the turntables for a 25x win. Along similar lines, the payout for the tamborine and the guitar pick are both 20x for six.

At the lower end, both the red A and yellow K symbols are worth 10x for six of a kind. Likewise, you’ll earn 6x for six of the purple Q, green J and blue 10 symbols.

Something slot players will absolutely love with this title is the extra value that the plethora of features add to your bottom line. In addition to that, if you have liked other titles that use this style of overall concept, then this is a title you will not want to avoid.

The feature-oriented gameplay experience of this game is centered around giving video slot fans a serious amount of excitement, and due to the wide appeal to a lot people, this slot has a valuable place in this software company’s portfolio as a whole. We also want to point out that we really like how the aesthetic appeal gives you an overwhelmingly cohesive style of play compared to only being an unimportant part of the slot.

Which online casinos have Rock the Reels Megaways?