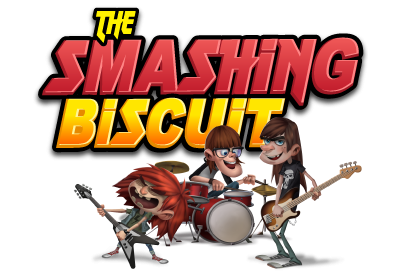 The Smashing Biscuit slot by PearFiction is all about a set of teenagers who have a punk rock band in their parents’ garage and all of the they get up to in the meantime. This title provides players with a Battle of the Bands bonus round where you can try to come out on top for some pretty big prizes, which is exactly how bands like this one get discovered. In this review of The Smashing Biscuit we look at all the fun features this slot offers. We also list the top casinos where The Smashing Biscuit can be played.

Casinos with The Smashing Biscuit

All over the world, there are teenagers trying to start bands, and most of them are some form of rock and roll. You’ll find that this game is all about the same concept with a punk rock band rocking out in the garage of their parents’ home.

This is a theme that we can’t remember having ever been used before, and that’s a shame because it’s a very fun one.

The format for this title is pretty straightforward with five reels and three rows. You’ll have 20 paylines in place, which are always static, and all of your wins are based on multiples of your total bet size. With extensive autoplay settings and a built-in achievements system, you’ll have plenty to look forward to with 16 different available bet sizes ranging from Ä0.20 to Ä100 per spin.

There’s clearly room for players at all different levels with a betting range that wide, and you’ll have no problem finding something that fits exactly what you’re looking for in terms of wager levels.

The golden wild symbols make appearances on the first, second, fourth and fifth reels. They help you to get extra winning combos by substituting for anything in the game except for the Battle of the Bands symbol.

These wilds appear quite often in this game, and they’ll help you to get lots of small and medium wins as well, which helps to keep the volatility low, a theme that you’ll often see in this game.

Multipliers Turned Up to 11

You can get multipliers in this game as well during the regular game mode. If you get a win on a spin, the multiplier for the next spin is increased by one position. You can see the current multiplier listed on the left-hand side of the reels in the form of an amplifier, which is a pretty smart way of handling it from a visual standpoint.

If you get a winning streak of a few wins in a row, you can drive the multiplier up to as high as 11x. However, if you hit a loss, you don’t automatically lose all of your multipliers. Instead, it will drop down by a factor of one for each spin without a win on it.

We really like how this multiplier feature works, and we think it’s a very smart way of handling things.

The dad of the house is a cool dad, and he’ll show up with a remote and a cup of coffee while wearing his robe and house shows at random before a given spin. He can do things like increase the multiplier, give you an instant win or trigger the Battle of the Bands bonus feature. This is a cool way of adding extra value and excitement to the game in a way that fits completely with the theme and concept of The Smashing Biscuit video slot.

The Battle of the Bands

The Battle of the Bands scatters only appear on the first, third and fifth reels, and they’re the only symbol that isn’t substituted for by the golden wild. When you get all three of these on the reels at once, you’re taken to the free spins bonus feature.

During the Battle of the Bands, the game changes to only have four reels with three rows, and the band members all become wild on a special pay table.

How to Win at The Smashing Biscuit Slot

Winning at this game is all about picking out the bet size that works the best for your bankroll and sticking to it until you get the Battle of the Bands bonus feature.

The three biscuit boys (Tiny Biscuit, Crunchy Biscuit and Soggy Biscuit) along with their dad make appearances on the reels for wins that range from 25x to 4x for five of a kind combinations, and those will help you to stay afloat or pull a small profit until you hit the bigger features.

However, getting a good run with the multipliers can also help you to win at this game in the regular game mode, so you can hold out for that also.

There are some great things about this game that stand out to us in a big way:

Regardless, we think that this title will appeal to a ton of different types of players, and PearFiction definitely did a great job with it.

Which online casinos have The Smashing Biscuit?