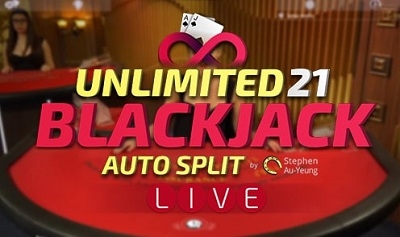 The concept behind Unlimited Blackjack, a live dealer game from Ezugi, is that all players are involved in the same hand and can play it however they want as individuals. There are some special rules that speed up the process of the game being played in this format, and a pair of the most popular blackjack side bets of all time keep the action levels up as well.

An Introduction to Unlimited Blackjack

In the live dealer space, when it comes to card games, blackjack is king. Ezugi knows that as much as anyone, and that means that they know how important it is to have as great of a blackjack offering as they can.

The Unlimited Blackjack live dealer tables are their way of making sure that this is the case.

What you’ll find with this game when you first take a look is that the tables look great with live dealers in the background performing other games, and this is a welcomed alternative to the overly produced style that some other providers like Evolution Gaming have, which is not a good fit for everyone.

In terms of gameplay, the action is pretty straightforward with a pace that’s a little on the faster side, but it’s not so fast that it’s not easy to keep up. In this way, they keep the game from having too many delays, which we’ll get into down below.

Players who are familiar with blackjack will know and understand that there can be different rule variations that change the game in small ways. In what follows, we’ll break down these particulars but also go into how the rule changes are in place to increase the speed of the game flow.

The following are the basics for how this game is played in terms of the general blackjack rule variations that you can find in most titles:

There’s also a special rule about splitting that’s designed to speed up the flow of the game since everyone is playing the same cards:

This helps to speed up the game, but it also simplifies some of the strategy involved and changes up how everything works with paired hands in terms of having a decision to play one hand or two (that happens before the split) that you don’t have in virtually any other variation of the game.

At most live dealer tables, you can find yourself in a situation where you’re stuck waiting for a slow player to take up all of the time they have available to make a decision. Unlimited Blackjack helps to avoid this type of situation by having everyone play the same hand, so you don’t have to wait on multiple hands to be played one after another. However, it also helps by putting a timer on all decisions.

The whole idea here is that the game is set up to avoid one of the biggest pitfalls of live dealer blackjack play: the low rate at which the hands are dealt. By combining the auto-split rule and the fact that most decisions have a five-second timer, it speeds this rate up tremendously.

If the timer runs out while the game is waiting on your decision, then it will make a reasonable decision for you based on the cards and the situation. If you’re the type of player who likes to take a really long time on your decisions, then this is not the game for you as a result.

A pair of side bets are found at the Unlimited Blackjack live dealer tables, and they help to provide additional action on top of what this game already offers.

The Perfect Pairs side bet is all about the first two cards that the player is given. You can win different amounts for different suit combinations of paired hands along the following lines:

The idea here is really straightforward, and it’s super simple to note if you won or lost this side bet, so you don’t have to worry about it adding to your timer while you try to figure it out and deal with your other decisions in the game at the same time.

Considered by many to be the most popular blackjack side bet in the world, it’s easy to see why this one was included. This wager is based around the combination of the player’s two cards and the dealer’s up card to create three-card poker hands, and the payouts are as follows:

You’ll note that these hand rankings are in a different order than the usual five-card poker hand rankings. That’s because three-card hands have different probabilities of being dealt compared to their five-card cousins, and the more rare a hand is, the higher the payout it receives.

How to Win at Unlimited Blackjack

The overall strategy used in this game is not particularly difficult, and a standard multi-deck approach will have you playing close to perfectly a majority of the time. The exception is with the paired hands since there is the auto-split rule.

This is different because you have to decide how to play with certain paired hands in terms of whether you wish to play only one hand or both resulting hands, and that decision comes before the cards are split, so you don’t know what the resulting hands will look like until after you choose.

Learning this aspect of strategy is tricky because there aren’t any comparable titles with similar areas of strategy to work with, and it has its own unique ways to play as a result. In any event, the payout rate for this game with correct play is in the range of 99.5 to 99.6 percent, which is up there with the best-paying blackjack games that you’ll find anywhere online.

This is a very solid game that Ezugi has put together with the premise of making the gameplay go by more quickly. We definitely think they have achieved their aim, but they also created a situation where there are some fun strategic differences and there are extra side bets, both of which combine to create a rather unique experience.

Overall, it’s a good example of thinking outside of the box without putting the entire game so far outside of the box that it alienates the people who want to play. Blackjack fans will be able to jump right into the live dealer Unlimited Blackjack tables and enjoy what’s happening without having to learn a lot of new rules or aspects of gameplay.

Which online casinos have Unlimited Blackjack?