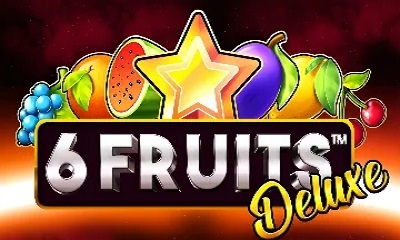 Synot Games’ 6 Fruits Deluxe video slot is based on a classic fruit machine theme. However, it plays more like a modern video slot with the betting and pay schedule. If you like older types of games but prefer modern slot conveniences, this is a great title to check out.

An Introduction to 6 Fruits Deluxe

Over the course of the progression of the slots industry, we’ve seen many different motifs come and go. However, some players still prefer older styles of games. Synot Games’ 6 Fruits Deluxe online slot is a perfect fit for those who enjoyed fruit-style titles.

With that said, it includes all of the modern conveniences and a faster paced style than you would see back then.

When it comes to throwback themed slots, developers have to be careful. That’s because it can be easy to just make a game that looks bad compared to modern standards. However, Synot didn’t have a problem with that in this title. The graphics look clean and polished, and the overall presentation is visually appealing. It stays true to the source material, so to speak, but it doesn’t come across as dated in any sense.

As for the gameplay, they have again stayed true to their inspiration for the title. However, they’ve also made the pay table more balanced and interesting than most older fruit machine games. This is achieved by making sure that players get a variety of ways to get paid. This approach is in opposition to many (or even most) fruit machines that were based on one single jackpot most of the time.

The layout has stayed true to early video slots that still used these types of themes. It’s fairly simple and straightforward, and it’s easy to get used to. However, that doesn’t make it boring in the least bit, and it’s set up in a way to offer action. Here’s what to expect:

To keep things as user-friendly as possible, the betting has been simplified in this title. Instead of using the old school approach to coins, coins per line and adjusting payline numbers, you just choose bets. Likewise, payouts have been affected in a similar way. All of your wins are based on the total amount wagered. This avoids the confusion that can come from “line-based” wins.

As for the volatility, it’s on the lower side of the medium range. With that said, the pay table definitely has some balance to it in spite of the particularly large top payout, as far as static jackpots are concerned. We like how they handled the pay schedule here and how it creates a balanced hit-rate as well.

The feature set for the 6 Fruits Deluxe online slot is not particularly deep. However, the gameplay style doesn’t require for it to be. Instead, the features are all there for a reason, and they serve important purposes. These purposes reside in creating a balanced experience with a variety of different ways to win. We’ll show you what these features are and what to expect so that you can jump in and start playing.

In many slots, the paying scatter symbol and bonus symbol are tied into one. However, that’s not the case here; they’re actually two different symbols. In this case, the scatter to pay attention to is the star.

This star shows up on every one of the five reels. However, it doesn’t matter where it’s located when it lands because it pays regardless. Here are the payouts you can get with this symbol:

Two things stand out to us here that we think players should know about. First and foremost, these symbols pay on any reel and any position. Additionally, they hit more often than what you’d think because the stars appear more than scatters do in most titles.

This ties into the fact that these payouts for the scatter are actually around the middle of the pay schedule. While that’s atypical, it fits here because of the increased hit-rate of the stars.

It’s also worth mentioning that these wins are multiple of the total bet size. That’s the case for the scatters wins, but it’s also the case for all other payouts in this title.

Consider the following numbers of free spins you can pick up:

Note again that you don’t have to get these silver stars in particular positions or on certain reels. They give free spins for three or more no matter where they show up. Additionally, you can re-trigger the feature by getting three or more during the free spins. This will add the same number of spins above to your total. However, the 6 Fruits Deluxe video slot has no maximum on the number of free spins you can earn.

During the free spins bonus round, you’re given better reels than the regular game. This leads to more wins on average. Additionally, it means that the free spins are worth more individually than regular spins. We like how Synot Games added extra value that’s built straight into the format of this feature.

How to Win at 6 Fruits Deluxe

In terms of practical gameplay, a lot of extra value comes from two places: lucky seven wins and free spins. You’re basically dealing with trying to hit those during your sessions to nail a winning session overall most of the time. This is a more simplistic style of play than what would appeal to players who like Extra Juicy Megaways for example.

This goes along with the slightly below average volatility and slightly above average hit-rate. With that said, we don’t recommend any serious betting adjustments here. Outside of choosing a smaller bet size when you first start, if you prefer that, just stick to your average. Staying in your comfort zone with your betting is what will give you the best results here.

The lucky red seven is historically the best-paying symbol in classic fruit slots. Additionally, it’s the top paying symbol here as well. For five of a kind, you’ll nail down a strong 1,000x win. It’s worth noting that this is not a line bet payout: It’s based on your entire wager. That makes it much larger than it may initially appear. However, it comes in as basically a moderate static jackpot amount.

In the middle of the pay table are two symbols that pay out 100x for five. Those are the watermelons and the grapes. Additionally, you can earn 40x for five of the plums or orange symbols. From there, it’s 30x for five of a kind combinations of both the lemons and cherries.

The cherries are the lowest-paying symbols overall. However, they are also the only symbol to pay for just two of a kind. You can score a small win for two of these on a payline from left to right, which helps with the hit-rate and volatility as well.

Since the 6 Fruits Deluxe online slot brings a high level of quality while still standing out as an individual game, this online slot fits tremendously in this software developer’s offering of games as a whole. Also worth noting, the style of gameplay is extremely centered on action with a tremendous amount of ways to win.

We really like how the graphics level gives you an overwhelmingly cohesive type of gameplay instead of just being a formality, and the range of features offers a variety of various extra ways to take down a win in addition to the usual pay table. Along with that, the theme is put together in a particularly cool way in this title, which is different than it only being an afterthought like what we see in virtually all video slots.

Which online casinos have 6 Fruits Deluxe?

What is the Return to Player (RTP) for 6 Fruits Deluxe?