Age of the Gods: King of Olympus 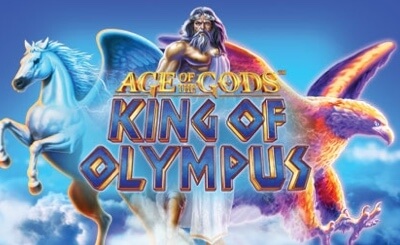 Zeus is known as the ruler of the gods in Greek mythology, and him along with his status in the Greek pantheon are the centerpiece of the Age of the Gods: King of Olympus video slot produced by Playtech. This progressive title has four different jackpots that can be won at random on any spin, and it’s a game that’s set up to be particularly flexible for players at all levels of stakes as well.

Casinos with Age of the Gods: King of Olympus

Introduction to Age of the Gods: King of Olympus

There are a lot of games that share Playtech’s Ultimate Power progressive jackpot pool, and the Age of the Gods series holds a number of those. The King of Olympus slot within this series centers around Zeus, the ruler of the Greek gods on Mount Olympus. Known as the highest-ranking Olympian, he brings down thunder and lightning on his foes, and in this game, he’ll help you to run up some serious wins.

What this game really brings to the table is an interplay between a strong pay table and some fun, value-packed features.

The gameplay side of things consists of three major parts: the regular pay table, the free spins mode and the progressive jackpots. All three of these are important with none of them necessarily overshadowing the others, and that creates a fun type of balanced experience.

To have a solid slot, you need a solid format with wagering options that are easy to manipulate and understand. That’s exactly what you get in the Age of the Gods: King of Olympus online slot with the following specs:

We’ll get more into this below, but this game is really set up to be accessible for players at different stakes since you can qualify for the progressives no matter how much or how little you’re betting on each turn. This happens because the chances of winning those jackpots scale with your bet size to keep things fair.

This slot has a balance between the different aspects of the gameplay in a way that makes a lot of sense. That means there’s a little bit to know about the Age of the Gods: King of Olympus slot in terms of where your value is coming from, but once you see all of the moving parts, it’s not very complicated to understand.

It’s not exactly surprising that Zeus is the wild symbol for this game. He’ll give you substitutions for anything but the scattered temple symbol, and he’s the only non-scatter symbol in the game to pay out for two of a kind. Along these lines, here are the payouts you can expect for combinations of only wild symbols:

The wild combinations pay out in the same way as all of the other combinations in this game. At the end of a spin, a calculation is done to see what the best possible individual payout can be on each payline, and that’s what you are rewarded for each line. This calculation is separate from the scatter wins.

There’s a temple symbols with the word “ZEUS” in place of the columns out front, and it’s decorated with lightning. This is the scatter symbol for this title, and it gives some solid wins that are multiples of your overall bet size.

In terms of pure payout value, five of this scatter gives the second-highest regular payout in the entire game.

What’s important to note is that all of the scatter wins can happen no matter where the symbols show up. They don’t have to be left to right on the reels, and they don’t have to fall into any particular position. As long as they’re on the reels anywhere at the end of the spin, they will count for a payout.

While you can get a payout for at least two scatters anywhere on the game board, you’ll need a minimum of three to trigger the free spins mode. There are two goodies in this mode that make the six free spins you earn worth a lot more than it might initially seem.

First, you start with a 2x multiplier for the first two spins. That increases to 4x for the second two spins and again to 6x for the final two spins. These multiply your entire win on each spin for everything except the progressive jackpots.

Aside from that, you’ll get an extra wild that shows up in the middle spot on the third reel for the entire free spins mode. Like regular wilds, this will not substitute for the scatter symbols. Note also that you cannot re-trigger the bonus feature.

Players get access to four progressive jackpots in this game. The Age of the Gods: King of Olympus progressive slot has Ultimate Power, Super Power, Extra Power and Power jackpots, each of which have different seed values and different chances to win.

Players don’t have to do anything special to qualify for these prizes. Bets at all levels qualify for the progressives, but higher wagers will get you better chances to win proportionately. For example, a wager of €0.25 per spin will have half the chance of hitting a progressive as a bet of €0.50 per turn.

How to Win at Age of the Gods: King of Olympus

The effect of this is that it keeps your chances of winning a progressive roughly the same on a per-session basis, but you’ll end up with a much more tolerable level of swings and variance.

This is particularly important for players who may be playing on a bonus or working through a play-through requirement for some other promotion since having a prolonged downswing could limit your ability to clear the offer.

Payout Structure for Age of the Gods: King of Olympus

There are some strong top payouts outside of the progressives with this title. We’ve already mentioned the 3,000x win for five wilds, and there’s also the top scatter payout that’s the same as a 2,500x line bet win. You’ll find that five of the Pegasus flying horse symbol gets you a 1,000x win too.

Like any slot, there are good and bad things about it. We like to cover both sides of things to give players a better idea about whether or not a game will be a good fit for them. With that said, here are some of the good things about this game:

A couple of things about this game that some players may not like include the following:

These aren’t major issues compared to what all the game has to offer, but we still like to cover everything there is to know about the slots we review.

There’s a lot of mileage that players can get out of the Age of the Gods: King of Olympus video slot. Between the progressives, the balanced pay table and the free spins mode, there are several serious sources of value.

If you like Greek mythology, and you like big jackpots, it’s not hard to see that this game could be a big hit for you.

Which online casinos have Age of the Gods: King of Olympus?