Age of the Gods Norse Legends 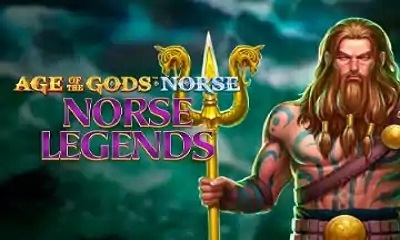 Playtech’s Age of the Gods Norse Legends online slot is all about a variety of Norse gods and goddesses. This is tied into every aspect of the game, including the numerous free spins features. Three different jackpots can also be had in this game for added fun.

Casinos with Age of the Gods Norse Legends

An Introduction to Age of the Gods Norse Legends

If you’ve been around the online slot industry for a while, you’ve probably noticed some patterns. One of those patterns is in the types of themes that are used. For example, there are plenty of games that use themes based around Norse deities. However, the Age of the Gods Norse Legends video slot from Playtech still manages to stand out.

This is because it’s top-tier in every aspect of the experience for players.

High levels of quality never go out of style, and that’s exactly what you see happening here. From a visual standpoint, this title is excellent. It has several deities that are shown both on the reels and in the features. Moreover, it has a gorgeous background and smooth animation. Overall, the presentation is definitely top-notch.

Playtech didn’t let the gameplay go just because this title looks amazing. Instead, they made sure it matches that high level of expectations. The pay table offers a reasonably high hit-rate. Moreover, the features offer plenty of customization and extra ways to win. This is all built around a set of three jackpots, two of which works a bit differently than the usual.

It’s really straightforward to get started playing in this game. That’s because the format is super solid and has been proven for a long time. Here’s what you can expect:

It’s really important to note that the volatility of this game actually has a bit of a range to it. This comes down to your ability to choose between different free spins features. We’ll break down more of how this works down below. However, know that the volatility can range from about the medium-high range all the way up to the very high range with this title.

The feature set for the Age of the Gods Norse Legends progressive slot centers around more than just the jackpots. It actually has some pretty good features. Additionally, these features affect both a bonus mode and the regular game mode. In the following, we’ll show you each aspect of these features. This will help you to get started with more confidence since you’ll know what’s going on.

The wild symbol is really easy to notice. It has a green Celtic knot in the background with gold trim. You’ll find this wild on every single reel, and it gives the following serious payouts:

The idea here is that these wilds give you value in two ways. First, they obviously give the really strong payouts above, which are the best in the game. Second, they help you out by giving you wins you wouldn’t have picked up otherwise. However, the caveat here is that they do not substitute for the scattered bonus symbol.

The bonus symbol looks almost like a gold coin with a purple Celtic knot background. Like the wild, it also makes an appearance on each one of the five reels. Note that the wins for the scatters are listed as multiples of the total bet size. It’s the only symbol in the game listed like that. Here’s what you can win:

These scatters also help you in another way, which we’ll get into below. However, note that it doesn’t matter which reels or positions they appear on. As long as three show up anywhere on the game board, you’ll get a payout.

There are a few different bonus features available in this game, and you get to choose. However, they are unlocked one at a time each time you trigger the bonus. With that said, you also get an option for the game to randomly choose the feature for you.

Three or more scatters will take you to a bonus game selection screen. Here are the potential options:

You cannot re-trigger the feature with scatters. However, you do get a chance for a re-trigger after each feature. You’re taken to a set of nine coins that you have to choose to turn over one at a time. Pick up three bonus symbols before you get three symbols of the figure in black for a re-trigger.

The values for the three jackpots in the Age of the Gods Norse Legends online slot are always shown on the left-hand side of the game board. However, the three of them work a bit differently:

These three jackpots add a lot of value to the game overall. We also like that the volatility of the lower two has been dropped down quite a bit with the forced win mechanic.

How to Win at Age of the Gods Norse Legends

Because this game has three progressives, the volatility will be fairly high. However, due to the variable nature of the volatility in the bonus mode, it’s not clear-cut. What we mean is that we can’t nail it down to one specific range of volatility.

However, what we can tell you is that you should consider dropping your bet size a bit for this game. If you play the lower volatility features, a drop of 25 to 33 percent should be sufficient. On the other hand, if you prefer the high volatility feature, a drop of 50 percent might be better.

This will help to smooth out the swings while still giving you chances for the progressives. That’s because all three of the progressives are paid out at random in this game. Moreover, no minimum bet size is required to qualify for them.

Payout Structure for Age of the Gods Norse Legends

Keeping with the Norse theme, there are three different runes used for payouts on the lower end. They all pay 150x for five.

The level of graphics of this video slot is excellent and boosts the overall gameplay. As if that wasn’t enough, the hit-rate of the bonus features in this title is high enough that video slot fans will definitely not get bored of playing.

Along with that, the overall concept put into play as the center for this online slot is a great foundation for the gameplay style and action. As a portion of this software developer’s selection of slots as a whole, this is a title that fills a key role because it has appeal to many players, and the gameplay style is something that is action-oriented with a serious amount of ways to come out a winner.

Which online casinos have Age of the Gods Norse Legends?