Age of the Gods: Prince of Olympus 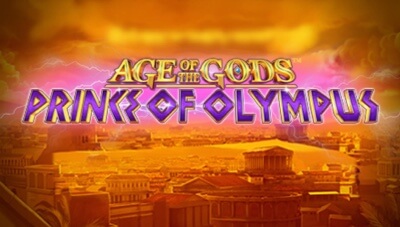 The four-progressive jackpot slot Age of the Gods: Prince of Olympus is a title produced by Playtech that ties into their most popular set of pooled progressive jackpots. Players will have chances to win these top prizes on every single spin for a six-figure top win always guaranteed for the highest progressive while having further opportunities to get paid from a variety of Greek mythology-themed bonus features. Learn all about the Prince of Olympus slot in this review and compare online casinos to play at.

Casinos with Age of the Gods: Prince of Olympus

Introduction to Age of the Gods: Prince of Olympus

The focus of this game is around Hercules, a very popular figure in Greek mythology. He was often referred to as the prince of Olympus because he was the son of Zeus, and as a demi-god, he found himself performing a wide range of impressive feats that came to define him and his story.

While there are a variety of references to different figures in Greek mythology in this game, it’s Hercules that everything ties into to give the slot a cohesive concept.

Visually, this is a very strong title. You’ll see the city out behind the reels in the background with a beautiful sunset scene behind that falling down behind the mountains, but the symbols and animations themselves are also very good.

In terms of gameplay, it’s hard to deny how much action there is available here. Multiple features are based around the feats that Hercules performed, and this helps the Age of Gods: Prince of Olympus online slot avoid being a “one trick pony” that only keeps players interested because of the multiple progressives. While the chance to win a minimum of €100,000 on each and every spin, regardless of the stakes, is nice, players need more to get an adequate level of action, and that’s what you’ll find here.

The layout for this title is pretty standard, but there are a few atypical things that we want to point out, especially those things that affect gameplay for some players:

There’s not much that’s out of the ordinary here, so it shouldn’t be hard for players to have an intuitive feel for the layout when they start playing to the point that they can jump right in without being too worried about missing anything particularly important.

A progressive slot that doesn’t have anything going on but the jackpot can get really boring really quickly even if you do have chances to win a life-changing amount on every single spin.

However, this isn’t an issue with the Age of Gods: Prince of Olympus progressive video slot since it’s packed with lots of other features and goodies that add more chances to get paid than what you would normally have in most regular slots, let alone titles with such a huge top jackpot.

There’s a wild symbol of Hercules wearing a tiger’s skin over his head and back. This symbol appears on the second, third and fourth reels only. It will substitute for any symbol except for the bonus hydra symbols or the Hercules logo scatters, and that means that you get extra wins that you wouldn’t have otherwise received.

However, it can also trigger a feature called Herculean Strength if you get one on the center of the middle reel or one on each of the second, third and fourth reels. In the former case, you get a third reel full of wilds with two re-spins with the wilds locked. In the latter case, you get one re-spin with all of the wilds on the game expanded to cover the second, third and fourth reels.

You don’t need us to tell you just how much value the Age of the Gods: Prince of Olympus slot gives you with this set of features because it makes it much easier to get big winning combinations.

The second Hercules symbol is just a logo that says the word “Hercules” on a red background with purple and gold trim. You’ll get scatter pays based on the following:

For the third and final major bonus round, you can get the hydra bonus symbol on the first and fifth reels to trigger the hydra bonus round. This plays out the huge battle that took place in Greek mythology between the multi-headed hydra and Hercules himself.

The key to this is that the hydra has a lot of different heads, and each time Hercules would cut one off, two more would grow back in its place. Chop off a few, and it’s pretty easy to see the problem.

However, in the Age of the Gods: Prince of Olympus progressive slot, this turns into more of a good thing. You’ll shoot arrows at the heads of the hydra to run up some bonus payouts, and then you’ll pick one of the hydra heads to give you a multiplier on all of your wins. You can also trigger the Hercules’ Rage feature within this bonus round to instantly destroy all of the heads for some massive wins.

On any random spin, you can be taken to the jackpot bonus feature no matter how much you’re wagering. However, the amount you’re wagering is directly proportional to your chances of winning.

In this feature, you’ll randomly choose from gold coins until you get a matching set for the Power, Extra Power, Super Power or Ultimate Power jackpots. Here are the minimum wins for these four jackpots:

These jackpots increase in size until someone wins them, and then they reset to the minimums listed above. Note that the lower jackpots hit several times a day each, so they add chances for some pretty frequent wins that you wouldn’t have received otherwise.

How to Win at Age of the Gods: Prince of Olympus

Boosting your chances of winning at this game is pretty straightforward with a simple tip that can manipulate your return to player percentage, which is like a payout rate in other games.

First and foremost, make sure that you always play with all of the paylines activated. A failure to do so will drop your RTP percentage substantially.

If you want to play with a smaller bet size, then choose a smaller bet per line while keeping all lines activated. Note that this will not hamper your ability to win the progressive jackpots because they are given proportionate chances to win based on all different available bet sizes.

Along these lines, it’s worth pointing out that another viable strategy is to play with smaller bet sizes than usual to smooth out the swings that come with a high-volatility title like this while simultaneously stretching out the length of your sessions to compensate for the smaller bet sizes. This will give you comparable chances to hit the progressives while making things more bearable for players who are sensitive to a high level of volatility in their sessions.

Payout Structure for Age of the Gods: Prince of Olympus

Payouts for this game really just come on two levels. The first level starts with Cerberus the three-headed dog and guardian of the underworld, and five of a kind of this symbol earns you 5,000x. You can also win 500x for five of the golden apple symbols or 200x for five of the club or magical belt. Note that all four of these upper-tier symbols pay for just two of a kind or more, and that helps to smooth out the volatility as well.

From there, there are card rank symbols in a Greek-looking font. The red A and blue K give 100x for five, and that drops to 75x for the green Q or cyan J symbols in five of a kind combinations as well. The purple 10 and yellow 9 pay 50x for five, and you’ll also find that these symbols only pay for three of a kind and up like more traditional video slot symbols.

With all of our slot reviews, we prefer to offer a balanced approach that shows both the pros and cons of each game we look at. We do this because we want to help players to find games that will fit what they’re looking for as individuals instead of prescribing “one size fits all” solutions that won’t actually fit everyone equally.

Keeping this in mind, consider these pros for the Age of Gods: Prince of Olympus video slot:

We also have a couple of cons for you to note:

Generally speaking, we think that most players most of the time won’t care too much about these cons, but they’re worth noting for the small minority.

The overall feel of the Age of the Gods: Prince of Olympus online slot is that Hercules is everywhere, and you’re dealing with opportunities to hit a variety of features on every spin. You also have the big, six-figure jackpot looming over you at all times just waiting to be won. The fact that you can win this at all levels of stakes is a great thing as well.

The bottom line is that this game is balanced enough to appeal to most players. Even though it has a Greek mythology-based theme, it stands out from that sub-genre as well and doesn’t fall into all of the common tropes that you see from other entries in the group.

Which online casinos have Age of the Gods: Prince of Olympus?