Amulet of the Dead 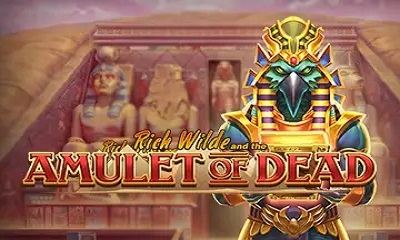 The Amulet of the Dead online slot from Play’n GO offers some variation on common Egyptian-themed tropes in online slots. A number of features combine here to give players a lot of action. Along with that, the game has excellent artwork that stands out in the sub-genre.

Casinos with Amulet of the Dead

An Introduction to Amulet of the Dead

If you’ve been around the slot world for long, you know there are a lot of Egyptian-themed video slots. In fact, it’s one of the more commonly used concepts out there. Play’n GO is aware of this, and that’s why they made their Amulet of the Dead video slot stand out.

Every aspect of this game is up there with the best that you can find in the sub-genre. This game seeks to redefine the theme instead of falling in line with what’s already out there.

It aims to do this through two areas. The first area is through how the game looks. You’ll find no lazily developed symbols or background here. Instead, every aspect of the graphics and animation are set up to look tremendous. Play’n GO definitely put some serious effort into the aesthetics of this title, and it shows in a major way.

However, the second area is the gameplay itself. This includes a balanced layout with some good payouts on the regular pay table. However, it also includes a feature set that gives you tons of ways to get extra wins. This comes in two forms itself: features that give more individual payouts and features that pay more for the payouts you do get. As a result, the style of play offers a lot for different kinds of players. This also keeps the action up to a serious level at all times.

The format used in this Egyptian-themed adventure is made to be simple and straightforward. Play’n GO clearly wanted players to be able to jump right in with no confusion. Here’s what to expect:

We really like how much flexibility players have when it comes to bet sizing in this game. With multiple options for adjusting how your bet size is determined, it’s easy to customize things.

However, all wins in this game in what follows are described as numbers of coins. Any exception to this will be noted. Additionally, the volatility is in the medium-low range, which is a balanced fit for most players. This is paired with a high hit-rate.

In the Amulet of the Dead online slot, you’re getting a lot of features. While the regular pay table offers some pretty good wins, the features really shine in a big way. We’ll break down each feature and the available payouts so that you know what to expect before getting started.

The Thoth symbols appear stacked three symbols high on the middle three reels. While they are wilds that give you more chances to win, they do more than that. For one, you’ll activate a multiplier for each one that shows up on the game board.

The number of reels where wilds appear determines the multiplier for that spin. All wins are multiplied by the following values:

Because the number of wilds compounds with the multiplier in terms of how much you’re likely to win, it’s a pretty big deal to get two or three reels with wilds on them. It’s important to note that this works in both the regular game mode and the free spins. Overall, it’s a really cool feature that adds some serious depth to the game. That’s on top of the fact that the stacked wilds give more opportunities to pick up multi-line wins that you would have missed out on without them.

The eye pendant is the key to this game. It is where the name of the Amulet of the Dead video slot comes from. Along these lines, a whole lot of value can come from it because it performs multiple functions.

First off, it acts as a scattered bonus symbol. It does not give regular scatter payouts during the regular game mode. However, during the free spins, it’ll give you payouts along the following lines:

From there, the wilds combine with the stacked wilds noted above to give some additional payouts. They offer the following wins on paylines:

The payline-based wins are calculated separately from scatter wins in the free spins.

If you pick up three or more of the scattered wilds, then you’ll trigger the free spins mode. This is the most valuable feature in the Amulet of the Dead online slot.

At the beginning of the feature, you’ll have a regular symbol chosen at random. This is the expanding symbol. After each spin, it’ll expand anywhere it appears to give you extra ways to win. We really like how this adds extra value to the free spins mode.

If you pick up three or more scatters during the free spins, you’ll be given instant wins that we noted above. However, you’ll also have 10 free spins added to your total.

How to Win at Amulet of the Dead

There are two things to know before looking at betting adjustments for the Amulet of the Dead video slot. The first is that the hit-rate is fairly high. The second is that the volatility is in the medium-low range. As a result, a specific type of adjustment is called for.

That adjustment is to slightly increase your bet size. We’re talking something small in the range of an increase of 33 to 50 percent. If you do this, you’ll get better payouts directly. However, the lower volatility and higher hit-rate will compensate to keep your swings from getting too excessive.

Payout Structure for Amulet of the Dead

The give card rank symbols are broken up into two tiers of payouts. First, you have the red A and turquoise K symbols, both of which pay 30x for five on a payline. However, five of a kind combinations of the purple Q, green J or blue 10 all pay 20x.

The Amulet of the Dead online slot is a valuable part of Play’n GO’s whole portfolio because of its visual appeal and gameplay. Additionally, a variety of special features are available in in this video slot, which is something we can’t assume for much of the industry as a whole.

On top of that, the look and feel of this title offers a fun tone that’s competitive with much that the online slots world as a whole has available. The feature-based style of gameplay of this slot is targeted toward offering slot fans a tremendous degree of fun, and in comparison to other video slots that utilize similar themes, this online slot differentiates itself in a number of ways compared to just being one in the same.

Which online casinos have Amulet of the Dead?