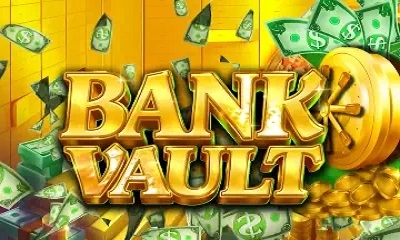 If you’re looking for something with lots of extra ways to win, the Bank Vault video slot from Microgaming could be just the ticket you’re looking for. This title uses a lot of mixed symbol combination wins on top of a few different bonus features that all culminate in tons of ways to get paid.

An Introduction to Bank Vault

Microgaming’s Bank Vault online slot is a game that brings a little bit of a different style of play than the usual fare. This is because they have multiple sets of symbols that pay for mixed symbol wins, but that’s on top of other features that provide chances for even more prizes.

The gameplay is the focus of this slot, and it’s all about lots of opportunities to come out as a winner.

Overall, the hit-rate is the star of the show in a lot of ways. Feature-centric gameplay is the order of the day as a whole. However, they also have set up the pay table to pay pretty frequently too. These two factors combine for an overall play style and experience that definitely brings the action to a whole different level.

That aside, the theme is pretty cool too. It’s based on Microgaming’s history of titles that were about breaking into bank vaults. While they aren’t sequels to each other specifically, they were all cut from the same cloth. However, much like the ones that came before it, the graphics and presentation of this game have been updated for modern times. That helps it to avoid looking generic at all. Instead, the wealth-based theme comes across in a very strong way that fits with the gameplay really well.

When you first look at the format of this game, it doesn’t seem like much that’s special. However, it works for the feature set perfectly while allowing room for other interfaces for the game mechanics. Here’s what you can expect from this slot:

The discussion of volatility in this game is a bit interesting. One reason for that is that the regular pay table hits quite a bit more often than most 25-line titles. A big part of this is the wilds that show up regularly and the mixed symbol prize options. The latter will remind some players of certain classic slot dynamics, especially with bar symbols.

The gameplay of the Bank Vault video slot centers around a few key game mechanics. Additionally, the features tied to these game mechanics are pretty value-packed as well. We suggest players read over our descriptions of how these features work before playing. Jumping right in and figuring it out as you go isn’t our recommendation here because of how some of the features don’t really work in the ways you’d intuitively expect.

First up, we want to take a look at the wild symbols because they provide a lot of value. They do this in two ways. On the one hand, they offer really good payouts along the following lines:

On the other hand, they help you to pick up a lot of wins via substitution. Not only can this give you payouts you wouldn’t have received otherwise, but they can also extend the size of existing combinations, which leads to much higher payouts.

The Diamond Dollar is a special type of scatter symbol. It shows up a lot more than other symbols in this game, but you still only need three of a kind to get a payout. Additionally, the prizes themselves are shown on the far left beside of the reels.

Each win is listed as a currency amount that you’ll win beside of the reels. However, here are the payouts based on a multiple of your total wager:

These symbols pay out no matter which locations they land on. Additionally, wins of more than nine of these symbols will still award the same 2,500x payout. We feel like these Diamond Dollar scatters are a cool way to award a variety of different payouts. This is because the range of wins is so wide, including a really large 2,500x top win. Again, this payout is multiplied by your total bet size and not the line bet win.

The green and gold vault door is the bonus symbol in this game. However, you can only find it on the first, third and fifth reels. When you get all three at once, you’ll trigger the cash wheel. This wheel can offer you free spins, the Cash Catch feature (see below) or a prize from the Diamond Dollar pay table.

In the Bank Vault slot free spins mode, you’ll be given a random number of free turns. However, as many as 30 free spins can be had at a time, and you’re given a multiplier worth up to 4x.

The Bank Vault video slot also has a Cash Catch feature. Random prizes are flying in the air, and you have to click on them to get as many as you can. This feature ends at random after you’ve collected a certain number of prizes. That means you don’t have to worry about being quick because speed and skill ultimately do not affect the total prize you get from this feature.

It’s important to note that the Cash Wheel that triggers this feature can also give you a multiplier on your wins. This multiplier can be as high as 4x. Additionally, it is the same way the multiplier is determined for the free spins mode.

How to Win at Bank Vault

With a volatility level that’s a bit above-average but a hit-rate that is as well, the play style is balanced. However, some players will want to lower their bet sizes very slightly by a level or two to be more comfortable. This is because you can still end up with a bit more swings than you would in video slots overall.

Even though that’s the case for some players, it’s probably not the case for most. Regardless, starting with a bet size that you’d normally be comfortable with and adjusting from there is a fine approach.

For the diamond symbols, you can get mixed payouts. The triple diamond gets you 10x for five, and the double is worth 6x. Additionally, five of a single diamond earns 4x. However, if you get a combination of diamond symbols that aren’t all matching, you’ll pick up 2x for five of a kind.

It’s a similar dynamic with the gold bar symbols. Players are given 2x for the double gold bar for five, and five of the single gold bar earns 1.5x. However, you can also make combinations of mismatched numbers of gold bars with a 1x win for five of them.

At the lower end of the pay table, you have three wealth-based symbols that do not have this dynamic. The red ring, green watch and money clip all pay 1x for five of a kind combinations.

The Bank Vault slot is an excellent part of this software developer’s overall selection of titles because of its clean visual appeal and action-oriented gameplay. The wealth theme put into play as the centerpiece for this video slot is a central foundation for the style of play and action, especially with the features and mismatched symbol payouts. Additionally, what slot fans will really enjoy with this one is the additional padding that the features and easier payouts add to your account balance with the higher hit-rate.

Which online casinos have Bank Vault?

What is the Return to Player (RTP) for Bank Vault?