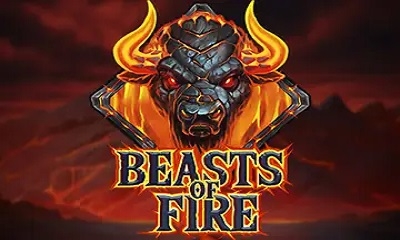 The Beasts of Fire online slot is a 576-ways to win title from Play’n GO. It features a theme centered around the North American wilderness with a winter slant. However, things can heat up during the features because that’s when the fire beasts come out for even bigger payouts.

Casinos with Beasts of Fire

An Introduction to Beasts of Fire

It’s interesting to see how difficult cultures through time tried to explain natural events they didn’t understand through storytelling. This storytelling would eventually become mythology of some sort. With the Beasts of Fire video slot, we see some influence from Native American mythology with a North American theme with a winter twist.

It’s cold on the reels, but things warm up with the fire beasts, which can give you the biggest payouts in the game.

The presentation of this game is the first thing you’ll notice. That’s largely because it’s so striking compared to much of the competition. A wintery background is shown of mountains with snow falling. On the reels, however, you have a somewhat staggered layout that stands out visually as well. The animals on the reels come across as fierce and cunning, and the card rank symbols even have great appeal.

With the theme, you’ll see the interaction between a more regular array of North American animals and the mythological fire beasts. This ties together the look and appeal of the game with the gameplay itself. Additionally, you end up with some features and goodies that give you a lot of ways to get paid. We really like immersive titles that tie together the theme and concept with the gameplay and features so well.

You’ll notice at first glance that the format is a little atypical. However, you shouldn’t worry too much about that because it’s still pretty easy to jump into. Here we’ll take a look at the things you’ll need to know and look out for before you start.

The volatility of this slot is not particularly high. We rank it around average or even just slightly below-average. The combination of the balanced pay table, balanced features and generous hit-rate are what create this dynamic overall.

Additionally, we want to note how the wins are calculated. To keep things simple, Play’n GO went with a straightforward method based on the multiple of your bet size. This means they don’t dive into the over-complication of “coins per spin” and all of that here.

With the Beasts of Fire online slot, the gameplay is tied into the concept of the title quite a bit. As such, each one of these features will have a specific tie-in with the theme. However, they all make sense from a gameplay perspective as well. In any case, we’ll break down each of them here so that you know exactly what to expect and what to look out for in your sessions.

On every single spin during the regular game mode, you have a random chance to trigger the Charging Buffalo Feature. The way this works is pretty simple: The number of buffalo symbols on the game board is greatly increased. Additionally, this is done through stacked buffalo symbols.

Due to the value of the buffalo symbols in this game, this is a particularly valuable feature. However, you don’t need to hit any particular winning combination or set of symbols to trigger it. Instead, it can happen on any turn at any stakes in the regular game mode.

On the middle three reels, you have a chance to get sunset symbols. These are the wild symbols, and within this “all ways” style of format, they’re worth a lot.

They do not get their own payouts for combinations due to only appearing on the second, third and fourth reels. However, they give a tremendous amount of value, and that’s especially since they land on the reels with the most symbols.

These wild sunset symbols substitute for everything but the scatters and bonus symbols.

The Beasts of Fire video slot also has a Meteor Re-spin feature. The meteor symbol can only appear on the third reels only. However, when it does, you’ll trigger a re-spin. The height of the reels increase by a factor of one for the re-spin. Additionally, you get a better chance of triggering the Charging Buffalo feature.

However, this feature gives more than that. This is because it can actually re-trigger up to twice. As a result, you’ll have the reels gain in size each time. This leads to thousands of ways to get paid on a given turn, which is where this re-spin feature gets so much value.

The scattered golden coin appears on the middle three reels just like the wilds. However, these can give you a free spins feature if you land all three on the reels simultaneously. You’ll be given 10 free spins when you start this feature as well.

During this game mode, the buffalo symbols all turn into fire beasts. This increases the value of their payouts substantially. Additionally, you can get 10 additional free turns for three scatters. These are just added to your total with no limit to the overall number of free spins you can earn in a single feature.

Note that the meteor symbol can trigger at any time to increase the reel size. However, the Charging Buffalo feature is not available during the free spins bonus round.

We want to point out the relationship between the payouts for the Buffalo and Fire Beast symbols. These are important because of how much extra value is given for the free spins mode as a result of the difference.

You’ll notice two things here. First, the payouts for the fire beast symbols are always double the payouts for the buffalo symbols. However, these are also the only symbols that give wins for two of a kind. For all of the rest of the symbols in this game, you need at least three of a kind for a payout.

How to Win at Beasts of Fire

We don’t recommend any betting adjustments for this game. Because both the volatility and the hit-rate are both pretty solid and aren’t away from the average all that much, it creates a very balanced style of play. As a result, increasing your decreasing your average bet doesn’t help achieve much.

Instead, you should simply pick a bet size around what you’re used to on average and go from there.

Payout Structure for Beasts of Fire

Four animal symbols make up the main top payouts. The bear gets you 5x, and you can earn 4.5x for five of the cougar. Additionally, wins of 4x and 3x are yours for five of a kind combinations of the eagle and raccoon, respectively.

The card rank symbols look great in this game with their stone-based looks as well. You can earn 2.5x for five of the red A, and the win for five of the orange K is 2x. Additionally, wins of 1.6x and 1.4x are yours for five of the purple Q or green J, respectively. Finally, a 1.2x payout can be awarded if you line up five of the blue 10 symbols.

If excitement is what you’re looking for, then you’ll totally enjoy the style of play that the Beasts of Fire online slot offers for your sessions. The range of features includes a variety of various extra ways to take down a win outside of the regular pay table, and the driving concept is utilized in a really intelligent way in this title, compared to it just being a small detail like what you see in virtually all titles.

As a portion of this software company’s portfolio overall, this is a video slot that fills an important position since it is a great fit to a whole lot of players. As if that wasn’t enough, the presentation of this title is top-notch and raises up the whole gameplay style.

Which online casinos have Beasts of Fire?

What is the Return to Player (RTP) for Beasts of Fire?