Want a Break From Slots? Try These Table Games You May Have Never Heard Of! 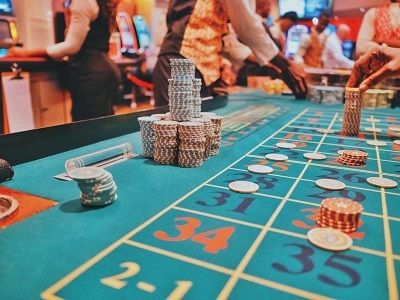 If you go into any online casino (or land-based for that matter), the majority of games available are slots. That’s normal, but it also creates a demand for players who want to try something new. Here we have five table games to check out that you may have never heard of to give you something fresh to try.

Try These Atypical Table Games for a Break From Online Slots

One of the problems in the online casino world is that table games are often framed as being boring and the “same old thing.” At the same time, new slots come out every week from some of the best developers in the world.

So why would anyone want to play table games anyway? Taking a break from slots is one good reason!

Sometimes it doesn’t matter how great the slot is, and you just want to try something different. However, if you’ve tried all of the usual suspects and don’t necessarily want to play common casino games for newbies, that can leave you feeling like you don’t have a lot of options left.

However, we have some suggestions for you to check out. These are table games that you may not have heard of and that offer different styles of play than the usual fare. You may find a new favorite, and at the very least, you’ll find something you can reliably fall back on when you just want a break from the slots action.

If you grew up playing solitaire, then the Casino Patience tables will be just like going back to those games. This is the single-draw variation of the solitaire game otherwise known as “Klondike.” It offers a fun scoring system that’s based on getting as many cards as you can to the suited stacks.

The way this works is pretty cool. You pay a set price per game, and you get to play through the draw pile once. However, you’re given a flat-rate prize for every card you get to your suited stacks. This will test your skill in solitaire games and make you think a bit!

We do have one bit of advice, however. If you have a mobile device with a smaller screen, this may not be the best option for you. Software providers do a good job of making it fit as well as they can. However, the nature of the game can make that difficult.

One of the problems many people have with Blackjack is that they feel like it takes too much strategy. If that’s the case for you, then the Pontoon tables are an excellent choice. It has a similar setup to blackjack, but the gameplay is broken down in a different way. The strategies are a lot easier here because the dealer doesn’t get an up-card. On top of that, you can always win if you make five cards without going bust!

Additionally, the gameplay also moves along as a more relaxing pace. That is helpful for players who would typically find slots to be pushing along more quickly than they would like. Being able to keep your own pace makes this better than a lot of live dealer options as well.

For players who want to jump into this game who know nothing about blackjack, you’ll do just fine. This is more of a primitive version of what’s available now in the blackjack genre as a whole.

A Twist on an Old Classic: All American Video Poker

For many players, video poker is a take it or leave it kind of genre. Chances are you either absolutely love it or absolutely hate it. However, even if you’re in the latter bunch, you may still want to consider the All American Video Poker variation. It’s a bit different in terms of how the payouts are broken down.

In most video poker styles, you might hit a good hand like a straight or flush and only get a payout of something like 5x. That’s really disheartening for many players who don’t want to sit around waiting forever on a good payout. In All American, both flushes and straights give bigger wins worth 8x. Note only does this mean better payouts more often, but it also means that the volatility is lower overall.

Something else worth noting is that this game has a bit of strategy involved, but it’s not as much. Most video poker games require a lot more knowledge than what you need to play this game really well. That makes it perfect for people who don’t want to put in much time studying.

We will be the first to admit that we love Three Card Poker. It’s such an easy game to jump in and out of, and it doesn’t take a very large time commitment. This makes it one of the best casino poker games to start with if you’ve never tried them, but veteran players can come back to it over and over again as well.

The gameplay is simple and straightforward, and the strategies are really easy to learn. In fact, you can learn to play this title perfectly in just a couple of sessions. If you want a break from slots, and poker action sounds good to you without having to get in too deep, we really recommend this title.

One thing to know is that the hand rankings are different than five-card poker. However, that’s because the chances of getting different starting hands is different with three cards instead of five.

For some reason, Let It Ride is one of those games that’s been around a long time, but so many players don’t know about it. Additionally, many mistake it for Red Dog, which is basically a guessing game on a coin flip that doesn’t appeal that much to many slot fans in the modern era.

Let It Ride is sort of a combination between casino poker and video poker. It offers a style of play based around manipulating your bet size as the cards are unveiled. However, this isn’t all that different than if you were able to boost your bet sizes as the reels stopped themselves from left to right.

Picking What’s Best For You

This is one of those topics where many people will know exactly where we’re coming from on wanting a break from slots. Additionally, lot of the time, you’ll find yourself bouncing from one slot to a different one looking for something fresh. However, you can run into situations where a new slot is just too familiar because of the format and gameplay to really scratch the new experience itch, so to speak.

With the five games we’ve offered here, you can make a switch to try out a table game instead. However, we haven’t just included the most popular games out there. Instead, we’ve hand-selected these to offer different things to different types of players because we understand that no two people have the exact same preferences. As a result, we’re confident that one of these options will work out well for you when you’re looking for your own break.