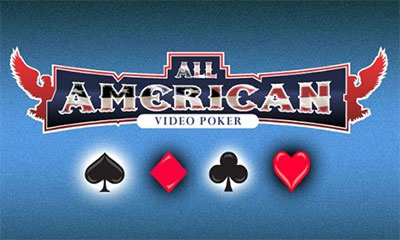 All American Video Poker is known for its atypical pay table where flushes, straights and full houses all share the same payout rate. This makes it a really interesting game from a strategic standpoint, and that’s why it has such a serious base of fans who prefer it over many other titles in the same genre.

Casinos with All American Video Poker

An Introduction to All American Video Poker

Non-wild card video poker games get a bit of a bad rap for not having as much variety as their wild card-wielding cousins. All American Video Poker breaks that pattern by playing with the pay table in a way that seems fundamentally weird at first until you realize the strategic implications.

The people who prefer this game over more widely spread titles like Jacks or Better generally do so because they like the higher payouts for straights and the strategic implications of the way the pay table is structured. Others like it because it’s something fresh and different from what they’re used to.

Some Important Notes About All American

When All American Video Poker was initially released in land-based machines, International Game Technology called their version USA Poker. Since they were one of the biggest names in the space at the time, that could have easily become the most well-known name for it, but for whatever reasons, that is not what happened.

Instead, it became known as All American and also became known for being one of the highest-paying video poker variations available if you were able to play properly. Many players came to the game mistakenly playing it like Jacks or Better, however, which led to lower payouts overall, and that was a part of the appeal of the game from the developer’s standpoint.

You can avoid that type of issue by adjusting your strategies accordingly, and we’ll offer some links below that will help you to do just that.

Many of the rules for this game are similar to other video poker variations, but there are some key differences, and we’ll look at all of it here to clarify any misunderstandings.

* One exception to this is some software providers who base a progressive jackpot on getting a royal flush with the cards in the specific order AKQJT, but that’s rare.

One of the main differences in the rules here is that All American is known for having a progressive jackpot from some popular providers online, and they may evaluate that jackpot based on the above or some other criteria.

The payouts we’re going to describe in what follows will be the style that you find the most often online. Certain software providers will have slightly different distributions in certain areas, but the overall idea will be the same.

If your hand is not good enough to land on this pay table, then you would not receive a payout.

There are a few key things to notice about the pay table that set this game apart from the other non-wild titles in the genre.

The first thing that players notice is that the full house, flush and straight payouts are all the same. This has an effect on the game of giving players better wins than they would usually get for flushes and straights, which are the two most common five-card “made hands” that players will pick up. As a result, it gives players more of a feeling of winning something significant compared to the payouts that can be as low as half of that for other variations depending on the pay table.

Another thing to notice is that the payouts for one pair and two pair are the same. What this means is that you have to be careful with how you play certain hands at the lower end of things because you do not get an improved payout if you go from a single pair that qualifies into a two pair type hand.

We have some very in-depth guides on both basic and advanced strategies for All American:

These might seem like minor details, but they both have really serious implications on learning how to win at All American video poker.

Players who are serious about their video poker play love All American because it provides a more action-packed style of play with more draws for big hands taking precedent over pair-based hands. On top of that, it has strategic differences from other titles that are a lot of fun to learn for certain types of players.

Even if you aren’t super serious about your play in this genre, you can still get a lot out of this game because of the higher payouts for the most common hands that you’ll have to draw to with both straights and flushes getting a big boost.

Which online casinos have All American Video Poker?

More About All American Video Poker