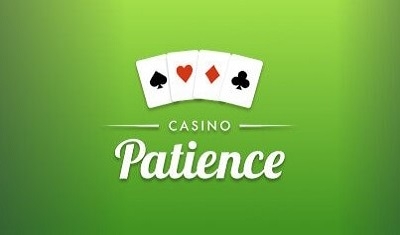 Casino Patience is a single-player game of strategy based on a classic form of solitaire called Klondike. Players get one shot through the deck and draw one card at a time in this game. Scoring is based on how many cards you’re able to add to the suited stacks.

An Introduction to Casino Patience

A large number of people grew up learning how to play solitaire. The actual name of the game is Klondike, but it goes by other names as well. Some of these names are based on drawing variations, which you get with Casino Patience.

Casino Patience is characterized by only going through the draw pile once. It also requires going one card at a time instead of drawing three.

Because this is such a familiar title for so many players, it’s typically really easy to hop right in. Getting started is super simple, and since you can play this game for a variety of stakes, it appeals to a wide range of individuals who want to test out their skills against the house in the most popular single-player card game of all time.

It’s also an interesting game from a strategic perspective, and there’s nothing else quite like it.

Moving Cards and the Board

Here we’ll take a look at the three parts of the board and what you need to know about each of them.

The trick to this game is learning how to get the most out of this rule set for moving cards. This will allow you to have the best chances to get the most cards you can to the foundations.

The exact betting options will vary a bit depending on where you’re playing Casino Patience. However, the way the bets are set up are usually the same.

You start off by paying a set amount per card to play the game to begin with. For example, if you were playing for €0.20 per card, your cost to play would be 52 times that. This comes to €10.40.

In this scoring system, you will turn a profit on a game when you move your 11th card to the foundations. Note also that all foundation cards are worth the same fixed prize each. The rank or suit of the cards does not matter.

The main rules of this game center around how you can move cards and how you cannot. We’re going to look at each part of the game board and how the movement rules apply. This will make it easy to understand which moves are allowed and which are not in this game.

That’s really all there is for the draw pile movements. You cannot move cards to the discard pile from any other part of the board.

Movement to the foundations is pretty straightforward. You have one pile out of four assigned to each suit. The first card moved to each foundation must be that suit’s respective ace. From there, you can add one card at a time based on consecutive rank (eg: A-2-3…).

Cards cannot be removed from the foundations once they are placed. This is a key component of the game’s strategy as well. That’s because you have to balance getting immediately paid with the possibility that you’ll need a card in a future play on the tableau to move things around.

The allowed movements for the tableau are a little more complicated. When placing a card to the tableau, it has to be one rank lower than the card where it’s placed. However, it also has to be the opposite color (red on black, black on red). If both of these criteria are not met, then the card cannot be placed there.

A stack or portion of a stack of cards can also be moved from the tableau to another stack on the tableau. However, the bottom card has to follow the rules of the card it’s being laid on as detailed above.

Two special cases exist. First, if you have a blank spot with no cards, only a king can be laid there. Additionally, cards cannot be laid on top of face down cards. With a face down card exposed, it has to simply be turned over. Only one card can be turned over at a time in this way.

How to Win at Casino Patience

However, once you make it about halfway through the draw pile, your focus should shift. Instead, it should become all about moving cards to the foundations as much as possible. If you follow this two-tier strategy, you’ll have better results on average than anything else.

Casino Patience is a really good game to play if you want to test yourself with something on the line. It’s a really fun game for people who don’t mind playing alone or who just want a quick game round without having to get into something that’s going to take a long time or get too involved. The average game here will last just a few minutes. However, you can move straight from one game to another with no problem.

Which online casinos have Casino Patience?