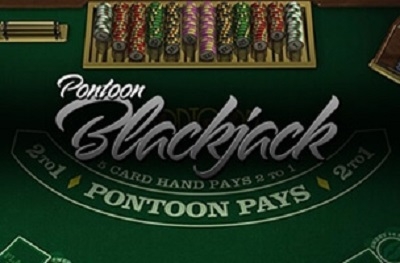 Pontoon is known for being an early form of blackjack, and it has somewhat different but simplified rules that offer a unique experience. It’s still a strategy-heavy game, but it’s a much easier title to learn to play really well than most traditional forms of blackjack, which makes it very popular among players who like strategy but who don’t want to spend tons of hours learning the particulars.

An Introduction to Pontoon

If you’ve ever looked into how card games change or develop over time, then Pontoon is a good example to draw from. You can clearly see the connection between this title and modern day blackjack, but it’s definitely its own game as well.

Pontoon incorporates certain aspects of blackjack that make it easy to see how the games are related without just being another generic version of the game.

The whole reason that players like strategic games like this is that they can really sink their teeth into learning how to play well. However, this is a title that doesn’t have quite as much depth to its play as most blackjack versions do, and that makes it attractive to those who might not want to have to sink a ton of time into learning intricate strategies that aren’t even relevant in most of your sessions.

The Rules of Pontoon

The rules of the game and the game procedure are as follows, and we’ll start with the absolute basics before we get into how the gameplay actually happens.

As you can see, just these basics set up a bit of a different scenario than what you typically see in blackjack games. Pontoon is its own beast, and as you see that from the above rules, we’ll now get more into how the procedure of the game works in what follows.

You can double with any number of cards in this game, and you can hit after doubling. However, you can only double once per hand.

Splitting is allowed as well worth up to three hands, and you can re-split aces. It’s also worth noting that if you split into a natural 21, then that counts as a Pontoon for the purposes of this game.

If you go bust by going over 21, then you lose.

An important rule to point out here as well is that you cannot stand if you have 14 or fewer points.

Once you decide to stand, or you end up with a Pontoon or five-card hand, your hand is compared with the dealer’s. The dealer will hit until he has at least 17 points, though the dealer will also hit on a soft 17 as well. Once the dealer is done, the hand totals are compared, and the winner and payouts are decided.

Note again that Pontoons and five-card hands pay 2:1 instead of the usual 1:1 wins that are used for everything else, and since that’s compounded further with doubling (and how flexible doubling is in this game), it’s clear to see how there are some really serious strategic implications.

How to Win at Pontoon

Strategy for this game is a bit different than the usual blackjack games because you can’t see either of the dealer’s cards. With that having been said, here’s what to expect in terms of the strategic implications of the atypical rule set:

With these basics out of the way, we can make some more concrete recommendations for people who wish to learn this title on a more in-depth level.

There are three pieces of information that will inform how you play this game. First, you have whether you hold a soft or hard hand. Second, you have your total. Finally, you have the number of cards in your hand.

Using these three pieces of information in a strategic way will guide you to perfect strategy almost 100 percent of the time.

The most common situation that you’ll run into is having two cards that make a hard total. When you have this, you’ll always stand with 15 or more, and you’ll always hit otherwise with two exceptions: Totals of 10 and 11 with two cards should be doubled.

With three cards and a hard total, you should follow the exact same strategy with one change: Totals of 9 are doubled as well with three cards.

Finally, with four cards and a hard total, you’ll always double with 16 or lower, hit with 17 and stand with 18 or higher.

The strategies for soft hands are much easier. With a soft 18 or lower, with two or three cards, you always stand. With a soft 19, 20 or 21, you’ll always stand with two cards and double with three. Finally, all soft totals with four cards are always doubled since it guarantees a five-card hand without busting.

As far as splitting goes, you only split aces and eights. Otherwise, you treat it as a hard total as usual.

The Best Online Casinos for Pontoon

A whole lot of software providers have Pontoon or the same game under a slightly different name, and that includes Microgaming, Playtech, BetSoft, Realtime Gaming, Cryptologic and others. Because this game is so popular, there’s one main thing to consider when it comes to picking a site for specifically playing this title:

The better bonuses you can get that can be played with this title, the better.

Other than that, there may be very small rule changes like differences in the numbers of decks used, but it won’t change the strategies involved enough to matter.

Pontoon is one of the more popular blackjack-related games that aren’t just a straight-up copy of another game with slightly different rules. The strategy noted above will tell you exactly how to play perfectly in this game, and while it’s slightly involved, it’s not particularly complicated.

This moderate depth of strategy and the novel rule set are what set this title apart from other games in the genre.

Which online casinos have Pontoon?