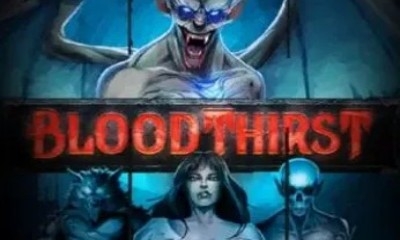 Hacksaw Gaming’s Bloodthirst online slot is a title that brings a lot of features to the table. The format is larger than usual, which gives even more room for these bonus rounds to trigger and operate with various mechanics.

An Introduction to the Bloodthirst Slot

A wide variety of online slots have been produced over the years that deal with horror themes. Titles like Blood Rage are a good example of this. While you often see these games center around a specific type of monster, the Bloodthirst video slot is different in this regard.

Instead, you’ll see a lot of different types of monsters on the reels in this one.

To say that this title has a great presentation would be a massive understatement. They’ve done an amazing job here with bringing the spooky feeling to life. Additionally, Hacksaw Gaming made sure the background looked like a haunted, spooky woods. Mountains are also seen in the background with a lot of fog looming. Of course, you can also see a huge full moon behind it all lighting up the dark sky. However, that’s not where the visual mastery ends because the monsters on the reels command a lot of respect as well.

The gameplay style that Hacksaw Gaming was going for here is clearly feature-centric. You can see this from how the format itself is larger than usual. However, at the same time, it uses much fewer paylines than you might initially expect. This is set up intentionally to create more room for the features to operate. As a result, it’s easy to see how the features were more of a priority in this slot. Accordingly, you’ll find down below that you have a lot of them to keep up with. That’s something that most players don’t have a problem with, but it’s something to remember regardless.

As we mentioned above, the layout is slightly uncommon. However, it doesn’t have to do with the shape or size of the game. Instead, it’s about the comparison of the number of paylines with the grid size. With that said, it’s an easy game to learn, and you’ll have no problem jumping right in. You’ll just have to get used to this title not having as many lines as you might expect. In any case, here’s what you should know before starting play:

We want to point out first that the volatility level of this game is well into the medium-high range. In fact, it’s somewhat difficult to find many non-progressive slots with higher volatility levels. The reason for this is baked straight into how the title is set up. With such a focus on features and less on wins from the regular pay table, the volatility increases a lot.

Volatility aside, the betting setup is pretty easy to play with. That’s because Hacksaw Gaming made sure that all wins are multiples of the total wager instead of the line bet amounts. Additionally, this makes it so much easier to know how much you stand to win with different combinations. We love how they made this game fundamentally easier to play with such a simple solution.

Gameplay and Features for the Bloodthirst Video Slot

The feature-centric style of the Bloodthirst online slot isn’t particularly common. Even in horror-themed slots like Undead Fortune, you don’t see the play style lean so far in the direction of the features. As such, we strongly recommend that players learn how the features work in the basic sense before playing. Additionally, we believe this will make it a whole lot easier to jump in and enjoy what this feature-rich title has to offer. Otherwise, you could find yourself not knowing exactly what’s going on.

The wild symbol is probably the most important symbol that you’ll see on the reels in the regular game mode. For one, it offers up some tremendous wins, including the single best regular payout available. Here’s a quick look at what these big “W” symbols can offer:

It’s important to note that these wilds do not substitute for the scattered bonus symbols. However, they do always offer up the best individual wins they can on each particular payline. As a result, you can have a rare situation where a wild works differently on multiple paylines. For example, on one it may count as a wild for a payout. At the same time, it could count as one of the other symbols via substitution for a win on a different line.

Hacksaw Gaming has set this title up so that each payline gets evaluated independently. From there, each of those lines gives you the single available payout that’s the highest.

One cool element of this game is that the height is taken advantage of by the Monster Reels feature. Most of the symbols show up stacked most of the time. However, if that leads to a reel being completely full of a given monster, you get a special payout. Here’s a look at the prizes that this can offer as a result:

This is a cool way to add additional payouts to the reels. Additionally, note that these payouts are multiples of the overall wager. That makes them even more valuable.

These are some of the biggest prizes you’ll find anywhere. Additionally, they’re a big part of the reason why the volatility is so far above the average.

The free spins bonus symbol is a red pentagram with a gray trim that looks like metal or stone. When three of a kind land on the board, you’re given a set of 10 free spins.

What makes this free spins mode better than the usual game is pretty straightforward. You have a better chance of filling reels with monster symbols for the Monster Reels feature. Additionally, with more high-level monster symbols on the reels, your average win size increases.

Four free spins symbols gives you a different feature called the Immortals Bonus Round. In this one, you’re also given 10 free spins, but things work a bit differently. You start off by having one of the four monster symbols selected at random. This becomes the main symbol for the feature.

This main symbol has the ability to expand on the reels to make it easier to get big wins.

However, note that your regular payouts are awarded first before expansions happen. This helps to avoid situations where you would have missed out on a different win. What’s more is that these expansions are activated for the rest of the bonus round.

How to Win at Bloodthirst

In the Bloodthirst video slot, a lot of the game revolves around the features. Along these lines, you have the ability to trigger them with different costs. For example, the Blood Thirst feature costs 100x while the Immortals feature requires a 200x wager. Playing with either of these options increases the volatility even more than usual. As such, we suggest dropping your bet size a lot.

However, another game mode is also available. With the Bonus Hunt mode, you can pay a wager that’s three times the size of your number amount. In exchange for this, you get five times the chances to trigger a bonus feature. Likewise, the volatility is much higher than the normal game mode. Again, dropping your bet size to compensate is our suggested adjustment.

As you might expect, the four monsters make up the top-paying wins. The demon in blue and the werewolf in red have the same payouts with 10x prizes for five of a kind. Next up are the yellow vampire and green zombie, both of which will earn 6x for five on a payline. These are some reasonable wins considering that they’re multiplied by your whole bet size.

Hacksaw Gaming made the card rank symbol wins really easy to remember. That’s because they’re all the same. For the A, K, Q, J and 10 symbols, you can earn 1x for five of a kind. Additionally, 0.5x and 0.1x are available for four of a kind or three of a kind, respectively.

Players who are looking for a game that’s more focused on a single type of monster may prefer something like Blood Hunters instead. However, if you’re a fan of horror in the general sense, then you might like the Bloodthirst slot more than most of what’s out there. As long as you don’t mind the feature-heavy style, we think you’ll love what it has to offer.

Which online casinos have Bloodthirst?

What is the Return to Player (RTP) for Bloodthirst?