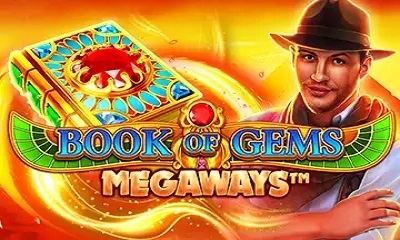 The Book of Gems Megaways video slot offers up to 3,125 ways to win on each spin. With a value-packed free spins mode and wild symbols on the reels, you’ll have plenty of ways to win. That’s on top of an already generous paytable and a high hit-rate.

Casinos with Book of Gems Megaways

An Introduction to Book of Gems

The Book of Gems online slot is an Egyptian-themed game based around the Megaways format. You’ll have all kinds of treasures on the game board. Even the card rank symbols are done in a font that matches the theme. However, there’s more to how this game was developed:

Despite using the Megaways format, this title’s gameplay has been simplified a bit. The end result is a ton of action without a bunch of largely meaningless bells and whistles.

One of the complaints we hear from slot fans sometimes is about how some games have a lot of features that rarely hit. Skywind’s title here will answer what a lot of those players have been looking for. The gameplay is very crisp in the sense that everything that’s there fits the theme. There are no extra features that are just there to pad the list of what’s available in this title.

At the same time, the visual appeal is pretty strong as well. This isn’t a slot where the aesthetics have been ignored. Along with that, it looks good even compared to other Egyptian-themed titles.

The format is a key part of how this game is played, and that’s even moreso than most titles. While it does use the Megaways formats, it’s still different than most other slots that use it. Here’s what to expect:

There are a couple of other things to know about this game. First, the hit-rate is pretty high, and the volatility is in the medium-low range. Because you get so many small and medium wins, the swings aren’t too severe. Also note that wins are discussed as a multiple of the bet size as a whole.

The Book of Gems video slot is set up around an exciting but straightforward set of features. You don’t have to worry about getting confused due to the complexity of what’s available. However, there’s enough going on that you definitely won’t get bored either.

The magical book of gems is the wild symbol in this title. That makes sense considering it’s also the name of the game itself. These wilds show up on the middle three reels only. However, because of the Megaways format being used, they offer tons of opportunities to pick up extra winning combinations that you would have otherwise not had a chance to pick up.

You can also get a scatter win if you pick up three of these on the game board at once. That win is worth 2x or twice your total bet size. It’s added in addition to any regular winning ways that you make on the reels.

The expanding symbols from the free spins feature, discussed below, cannot be substituted for by the wild. Outside of that, the wild books will substitute for anything else in this slot.

We noted about that three wilds on the game board simultaneously gives an instant win of 2x. It also triggers the free spins mode. This free spins mode will always give you 10 free turns no matter the position of those triggering wilds.

During the free spins, wins are paid as usual. However, if you get the expanding symbol on at least three reels, you’ll get extra payouts. It doesn’t matter which reels these expanding symbols land on. They will pay as if they are all left to right after expanding to cover the number of symbols on the reels. Note that these expansions will not interfere with any of the regular payouts that you’re owed from other symbols.

On the left-hand side of the game board, you have an option to purchase the bonus feature. To do so costs 70 times your current bet size. If you’re going to go this route, we suggest choosing a much smaller bet size than you’d normally take. Along these lines, it’s like making a separate type of wager.

Keep in mind that the volatility on this type of bet is going to be lower conceptually than the regular slot. However, because the base wager size is 70 times that of the slot, you have to adjust your bet size downward quite a bit to get to the same level of functional volatility respective to the bet sizes.

How to Win at Book of Gems Megaways

The volatility of this title being in the medium-low range gives you flexible options for adjusting. Choosing a bet size around the average of what you’re used to is completely fine. However, an adjustment you can make is to increase that size by 33 to 50 percent.

The idea here is twofold. First, you get larger wins since your bet size is larger, which is pretty obvious. However, the second part of this idea is that the swings won’t be that severe since the volatility is lower than average. This allows you to get the best of both worlds without getting into a situation where the swings move around your account balance too much for comfort.

The symbols in this game are broken up into three tiers. The first tier holds the explorer, a man wearing a hat. He pays 200x for five of a kind, and he’s the best-paying symbol in the game by quite a bit. That’s why we put him in a tier all by himself.

In the next tier are three golden objects decorated in gems. The gold and purple pyramid gets you 125x for five. However, your prize is 70x for the other two symbols in this tier. They are the gold and red scarab (a type of beetle) and a gold and green ring showing the Eye of Ra.

Finally, the card rank symbols make up the lowest tier. They are decorated in a gorgeous font that fits the theme perfectly. The purple A and K symbols get you 40x for five. Five of a kind of the green Q, blue J or orange 10 symbols are all worth 30x.

If you have liked other online slots that feature this type of overall theme, then the Book of Gems online slot is one title you definitely won’t want to miss playing, and the feature set offers several different additional ways to get paid on top of the regular pay table offering. Due to the large attention from a lot people, this title has a valuable position in this software company’s selection of titles overall.

The gameplay style is something that is action-focused with a serious number of ways to hit serious payouts. As if that wasn’t enough, the graphics level of this video slot is top-tier and boosts the entire gameplay.