Book of Santa Casinos and Review 2021 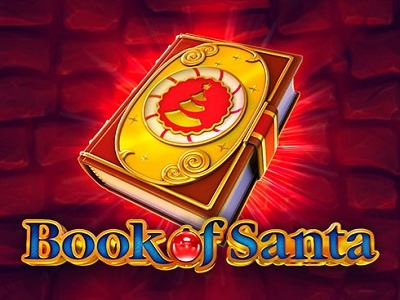 The Book of Santa video slot is Endorphina’s play on Egyptian-themed online slots that focus on some type of mythological or magical book. Instead, this game uses Santa and a Christmas theme as a bit of a spoof on the concept, which is fun, but they also include some strong features and a high hit-rate for added action.

Casinos with Book of Santa

An Introduction to Book of Santa

In the greater slot industry, there are a ton of games that use Egyptian themes based around the book of the dead. While it will be stated in a lot of different ways, that’s what it’s always talking about, so Endorphina made a bit of a spoof of this concept with a Christmas theme with their Book of Santa online slot.

We think that this “meta” level of picking at a common trope in the slot sector is funny, but they didn’t neglect the graphics and gameplay to go along with the fun theme.

The aesthetic appeal of this game centers around play happening in front of a fireplace, which looks gorgeous and inviting. From a gameplay perspective, the hit-rate is high, and there are some features that give you opportunities to pick up serious wins. The spin on the free spins feature, so to speak, is particularly interesting and innovative.

The format for this game is about as straightforward as you can get. That’s a great thing here since you don’t have to learn anything new and can just jump right into play. Here’s what to expect:

The hit-rate is high in this game, and most of the value comes from the regular pay table. This helps to keep the volatility on the upper end of the low range or the lower end of the medium range, which means significantly fewer big swings than you’d get from most other titles.

The gameplay of this title largely centers around the regular pay table and ways to get more value from that pay table. With that said, the bonus round side of things is covered as well, so this game has a really balanced play style with all things considered.

It’s not exactly surprising that the Book of Santa online slot would have the actual book as the centerpiece of the regular game. It achieves this by being the wild symbol, and it will substitute for any of the regular paying symbols.

What’s interesting about this symbol is that it also gives scatter pays, so you can win in two different ways on both paylines and as a scatter. With that said, here are the payline win combinations and payouts for this wild book:

Aside from that, there are also scatter payouts along the following lines:

Because of their payouts that come in two ways and the fact that they are wilds that show up on every single one of the five reels, they are the most important symbol in the game. On that basis, they are also the centerpiece of the Book of Santa video slot as a whole.

As if the books didn’t give enough value on their own, three or more anywhere on the game board will give you 10 free spins. At the beginning of the free turns, a randomly selected symbol becomes a special expanding symbol.

When it appears on the reels, after wins are given normally, those symbols will expand, and you will be given additional payouts for them. What’s cool about these expanding symbols is that they pay no matter where they’re located from left to right as if they were all in a line, so you can run up some pretty serious wins as a result.

With the non-adjacent wins available, free spins are obviously worth more than regular spins. It’s also worth noting that you can pick up another set of 10 free spins added to your total by getting at least three of the book son the reels once again. Note that the wild symbols do not substitute for the expanding symbols in this feature.

The game feature in this title is atypical compared to most because Endorphina handles it differently. It’s structured based on picking one of four random cards to try to get one higher than a fifth card that’s shown face-up.

The catch is that you don’t have to play once you’ve viewed the cards.

Because of this, after every single win, you should view the cards to see if they are favorable. The distribution isn’t completely normal, so the only winning cards to play are when you’re facing a 2, 3, 4 or 5. Playing with a 6, 7 or 8 will all be break-even, and playing with a 9 or higher is a losing proposition.

As such, you should view them after every win but only play with a five or lower.

How to Win at Book of Santa

There are two very important things to do when playing the Book of Santa online slot. The first is to always have 10 paylines activated, and that’s even if you have to lower the value of your bet size otherwise. If you have nine or fewer paylines going, you’ll have a lower RTP percentage (meaning a lower payout percentage on average) no matter what your total bet size happens to be.

The second thing to do is to make sure that you always check the gamble game, even if you don’t play it through. Always play with a 2, 3, 4 or 5 showing. You can decide to play with a 6, 7 or 8; it doesn’t matter either way. For a nine or higher, you should never play.

Payout Structure for Book of Santa

Santa is the highest-paying regular symbol with payline wins the same as the way. They pay 500x for five of a kind. The bells pay 200x for five, and five of the stars or sleds will win 75x. All four of these symbols, just like the wilds, pay for two of a kind or more, and that increases the hit-rate and lowers the volatility.

The golden A and red K symbols each pay 15x for five. Five of a kind of the green Q, the blue J and the purple 10 pay 10x each.

Endorphina did an incredible job with this game considering it’s based on somewhat of a spoof of Egyptian-themed titles. The gameplay is super strong with a great balance between the regular pay table and the innovative bonus feature. We think that between the gameplay, the theme and the solid graphics that this will be a title that most players will get a lot out of.