Break Away Deluxe Casinos and Review 2021 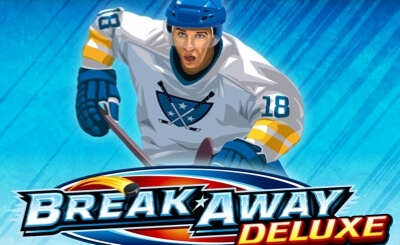 As the sequel to the original Break Away, the Break Away Deluxe online slot offers a larger 5×5 grid of symbols. Produced by a partnership between Microgaming and Stormcraft Studios, this title brings a ton of hockey action to your screen with options to customize your gameplay experience and lots of high-action bonus features. Read this review for all the details and to find an online casino to play Break Away Deluxe at.

Casinos with Break Away Deluxe

Introduction to Break Away Deluxe

Hockey is one of the most popular action-oriented sports in the world, and the Break Away Deluxe slot is the sequel to Microgaming’s original Break Away video slot based on this sport. In the sequel, you get some features that are throwbacks to the original, but most of the experience offers something fresh and new.

The Break Away Deluxe online slot was developed by Stormcraft Studios for the Microgaming Quickfire software platform.

You don’t really have to care so much about hockey to get a lot from this game. It offers a style of play that’s particularly strong with a fast-paced lean to it. If you’re the type of player who enjoys something a little bit outside of the box, then this is a title that you’ll likely enjoy as well, which you can see more about below when we discuss the format of the game and the options for customizing your experience.

At first glance, you’ll immediately notice that there are some things about this title that stand out as being non-standard. Here is a summary of what you can expect along these lines:

We also want to point out that the Break Away Deluxe video slot has a low volatility overall and a high hit-rate. This is evident from the distribution of the pay table and how the features work in the overall gameplay.

There’s a set of features used in this game that combine to do two things: make it easier to get several wins on the same spin and increase the value of those wins. Understanding how these features come together to create compounding wins is the key to understanding why the volatility is so low while this slot retains its ability to give some pretty solid wins.

If you get a winning combination on the reels, the Rolling Reels feature will activate no matter if you’re in the regular game mode or the free spins mode.

The Rolling Reels feature has winning symbols disappear to allow new symbols to fall into place.

What’s so key about this feature is that you can get new wins when those symbols collapse, which in turn triggers the feature once again. What you see here is that there are a lot of opportunities with the Rolling Reels to get several wins on the same paid spin, and that plays very much into the dynamic that we described above.

On random turns in the regular game mode, the Smashing Wild feature can be activated to turn one of the middle three reels completely wild for a guaranteed payout. When this happens, the payout will trigger the Rolling Reels feature above, so you can already see how these features are combining with each other to create compounding wins.

The Smashing Wild feature allows these wilds to stay on the reels during the Rolling Reels portion of how the spin plays out. What this means is that you get even more opportunities for several wins on the same turn than you were already getting, and it’s this synergy between these two features that is at the heart of how the main game works.

The hockey puck symbol is scattered. The payouts for the scatters, which can be located anywhere on the game board for a win, are as follows:

Three or more of these scatters will give you a shot at a set of free spins. You’ll get 12 free spins with the Growing Wilds and Multiplier Trails features.

The Multiplier Trails Feature gives an increasing multiplier for each stage of the Rolling Reels feature. You start out with 2x, then 3x, 4x, 5x and 8x for subsequent rolls of the reels. It’s a way that this game provides a ton of value for a feature that you were going to hit a significant percentage of the time anyway.

Growing Wilds in the Break Away Deluxe video slot have wild symbols super stacks on the last four reels. The stack increases by a factor of one on each turn. What’s important about this is that it not only gives you chances to get several wins on the same paid spin, but when they disappear as a part of the Rolling Reels feature, it means even more wilds will just fall down in place to make it even easier to run up the multipliers and get more payouts.

How to Win at Break Away Deluxe

Our recommendation is to play this game with as many paylines as you feel comfortable with. While 88 is ideal, the €0.88 minimum bet size might be a turn-off for some. If that’s the case for you, then just drop down to whatever you’re comfortable with.

This strategy is all about taking advantage of the fact that this game is geared so much around giving players a lot of frequent wins. The more paylines you have activated, the better the chances are that you’ll be able to take advantage of that aspect of the slot.

Payout Structure for Break Away Deluxe

The way the payouts are structured is really centered around giving players a fairly flat and balanced distribution of wins. The top payout is 11.76x for five of the hockey player in the red jersey, but there are other players that pay 5.76x and 4.16x for five as well.

Five of the referee gets you 3.76x, and five of the two players facing off is worth just slightly less at 3.16x.

Microgaming’s Break Away Deluxe video slot takes the original up a notch while maintaining some of the basic ideas of the first one like the Rolling Reels feature and the focus on action-oriented gameplay. Using a 5×5 layout with larger reels adds a lot to this title with a lot of paylines available (but not forced) and features that give you opportunities to win several times in a row on the same turn.