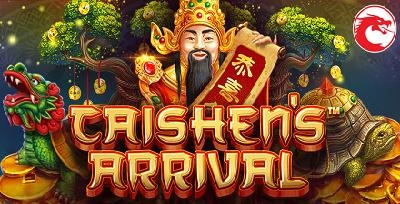 The Caishen’s Arrival slot by BetSoft centers around Caishen, an important Chinese and Taoist mythological figure who can turn iron and stone into gold. He gives lots of ways to get paid with free spins, re-spins and other goodies that make it easier for you to stack up your own pile of gold in the process.

An Introduction to Caishen’s Arrival

BetSoft is really good about bringing out some variety in what would otherwise be seen as tired and overused themes and concepts. With their Chinese-inspired Caishen’s Arrival video slot, players will get to see this firsthand as they check out what many other software providers might have turned into a straightforward Asian-inspired title.

What makes Caishen’s Arrival stand out is the intelligent use of features in ways that aren’t always seen and to put those into a combination that brings out an action-oriented gameplay experience.

The usual high-level graphics that players have come to expect from BetSoft are definitely in play here, but it’s the gameplay that stands out the most. They’ve made this game give you a type of experience that’s a bit different than most with a different twist to most of their features that makes it easier to trigger them while simultaneously giving you solid value.

Players get a pretty usual format here with a great approach to choosing from your available betting options that we wish more providers would learn from. Here’s what to expect:

Together with all of this, it’s worth noting that this title has a volatility that’s at the lower end of the medium part of the spectrum, which isn’t too far out of bounds for what most players are comfortable with while still providing options for some pretty strong top-tier prizes.

The Caishen’s Arrival video slot has a solid pay table, but most of the action-oriented play comes from the features. The list of features itself might seem basic on the surface, but it’s the way that they are actually implemented that really drives the play.

Caishen himself is the wild symbol. He will appear on the second, third and fourth reels only, so he will not give you winning line bet combinations that consist only of wilds. However, he will do something that most other wilds won’t do.

The wild symbol in this game counts for scatter symbols, even if no other regular scatters appear on the game board.

On top of that, the wild symbols can appear stacked as well, and that not only helps you to get extra payouts (and more opportunities for multi-line prizes on the same paid spin), but it leads to a feature that we’ll get into below.

As we mentioned above, the Caishen wild symbol can show up in a stacked form. If he appears and covers an entire reel with wilds, then you’ll activate a re-spin feature. The way this feature works out is that you’ll be given your regular payouts for the paid spin first, and then the wilds for the filled reel will hold in place while the other reels spin again for free.

It’s worth noting that you can pick up additional reels full of wilds on the re-spin to gain up to three total re-spins in succession with all wild reels being held in place to the end.

It’s possible to end up with a re-spin at the end of this feature where every single spot on the middle three reels is held wild, and the opportunities for wins are obvious there with four of a kind pays being forced for all symbols that show up on the first reel and lots of easy opportunities for five of a kind combinations.

The coin purse symbol is scattered in this game, and it appears on every reel. The wild symbol also substitutes for this scattered coin purse, but getting multiple stacked wilds on one reel will only count as one scatter.

There are solid scatter pays as follows:

Since you can claim the three of a kind win for three wilds, it’s technically possible to get a payout for only wild symbols, but it’s a scatter win of 1x and not a line bet wager like what you might be used to in most other titles.

To trigger the free spins mode in this game, you only have to get two symbols on the reels: a red ticket with a golden stamp on it that appears on the first and last reels only. The wild symbols will not count for these symbols, but you only need two of them to get a set of 10 free spins.

During this free spins mode, all wins are multiplied by a factor of three. This adds a tremendous amount of value, especially since the re-spin feature can be activated during this bonus mode as well.

How to Win at Caishen’s Arrival

With BetSoft’s Caishen’s Arrival video slot, everything pretty much centers around letting the volatility even out over time while trying to get pays higher on the pay table and letting the features trigger over time. The volatility isn’t super high as a result, but it’s definitely up in the medium range.

As a result, what you’re looking to do is make sure that you’re using good bankroll management so that you’ll be able to spend several sessions at this game over time instead of running through your account balance all at once. This will let some of the luck factor even out and give you better chances of hitting multiple features in a row, which is where you’ll really run up the best winning streaks.

There are three tiers of value given in this game’s pay table. It starts with the lucky turtle symbol, and he’ll give you 400x for five of a kind on a payline, which is the same as for five scatters. Those two wins tie for the best individual pays in the game, but with the stacked wilds, it’s possible to get multiple iterations of the turtle combo at the same time.

Moving to the lower end of the pay table, you’ll have a red A, blue K, green Q, purple J and yellow 10 that pay from 4x to 1x for five of a kind combinations.

The Asian-themed sub-genre of online slots is full of titles that don’t really have much that’s different to offer. BetSoft definitely avoided being thrown into that group with their Caishen’s Arrival online slot by giving it different types of features than you normally see along with a strong, top-heavy pay table that allows for some pretty tremendous wins in multiple ways.

Which online casinos have Caishen's Arrival?