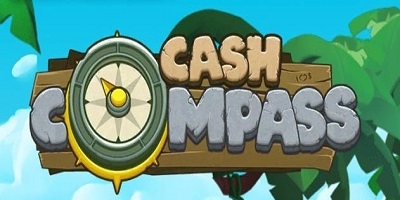 The Cash Compass online slot from Hacksaw Gaming, available through Microgaming Quickfire, gives players a spin on the cluster-based payout style of play. You can get compass symbols to randomly spread across the reels in a given direction to give you wins worth up to 1,000x on top of opportunities for multiple bonus features.

An Introduction to Cash Compass

There are a number of cluster-based titles out there that give wins based on symbols matching in groups on a large grid of tiles, and that’s the sub-genre that the Hacksaw Gaming title Cash Compass uses. However, they stand out here for having put some different spins on this game style.

All of the features here combine in a way that gives players a different style of play compared to what you’d be used to with this format.

Something you’ll notice right away is that the graphical style looks tremendous even though it’s not based on 3-D graphics or any type of realistic portrayal of looking for treasure on an island.

The gameplay for the Cash Compass video slot is outstanding. The feature-based style combined with the expanding compass symbols bring a lot of excitement to the reels and gives players a lot to look forward to in every single session.

The whole idea here is that you aren’t having to deal with paylines to get wins and that they are determined in a way that would be more familiar to players who have played casual or social games like the gem-matching titles. Here’s what to expect:

Volatility for cluster games can vary quite a bit, but in this title, it’s on the lower end of the medium range. The hit-rate is solid, and that’s largely in part to the compass symbol giving you more wins than you’d normally get on a title with this style of format.

While virtually all cluster-based slots have a style of gameplay that encourages action, that’s taken to another level with the Cash Compass online slot. The features are largely the reason for this, though the regular pay table does help a bit.

The free spins scatter symbol in this slot is a set of three green bottles with “FS” written on the label. If you land three of these on the game board at the same time, then you will be given a set of 10 free spins.

This free spins mode offers an expansion of the compass feature detailed below. We’ll show exactly what the difference is when we get to that, but the important thing to know in the general sense is that the free spins in the Cash Compass video slot are worth quite a bit more than the regular spins.

As a result, you get more value than what you would typically assume just based on the idea of getting 10 free spins in this game.

Another scattered bonus symbol in this game is the chest. Once again, you can land three of these scatters to activate the Wheel Bonus Feature.

When this feature is launched, a wheel will appear and give players chances to win across its eight sections.

You can get as many as 50 spins on this wheel, but ultimately, the number of spins you get in reality comes down to how long you can last without getting a black and white skull symbol; this is what ends the feature.

There are some good wins on this wheel, and they are accumulated while you play the feature until you hit the skull. Once you’re done with the feature, all of your wins are added up and added to your account balance.

The compass symbol, from the name of the game, is the most important symbol in the entire title. If you get five or more on the reels, no matter where they appear, then you’ll have them all multiply and expand in one of eight random directions (horizontally, vertically or diagonally).

This leads directly to better payouts, but it’s worth noting that this feature only activates after all regular wins have been paid, so you don’t have to worry about missing out on anything as a result of this feature.

The compass also has special payouts that include the following:

These wins are important because they include payouts for clusters of more than 15 spots. While this is very much accessible due to the compass expansion feature, it’s also the only symbol in the game where all wins of 15+ are not lumped together into the same payout.

How to Win at Cash Compass

The main thing to understand about this title is that it has a reasonably low volatility for how many features there are and the value those features give. A bit part of this is simply because of how good the hit-rate is on the regular pay table, which leads to an overall medium-low volatility.

Along these lines, you can adjust your betting to be 25-50 percent higher sizes than you would normally use, more or less. The end result is that the swings will still be fairly smooth, but you’ll get bigger payouts when the compass symbols show up and give you some of those top-end payouts.

There are eight symbols in the Cash Compass online slot that pay normally other than the compass, and they break the pay table up into two portions.

Things drop down a bit for the card rank symbols. The red A, purple K, orange Q and green J symbols all have the exact same payout structure that starts with 0.1x wins for six of a kind and goes all the way up to the 10x level for cluster combinations with at least 15 symbols in them.

If you’re looking for a game that combines a feature-rich experience with a lot of action, and if you’re tired of the normal formats with paylines and certain numbers of ways to win, then the Cash Compass video slot is definitely worth checking out.

In particular, we really like how the compass symbols dominate the action while still showing up super often. That keeps you from getting bored while you play waiting around on the next feature, which is a trap that a lot of online slots fall into in general.