Court of Hearts Casinos and Review 2021 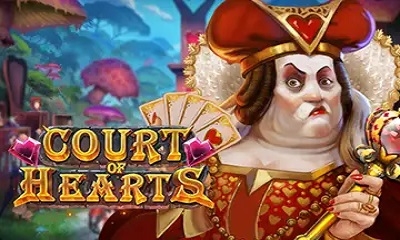 The Court of Hearts video slot from Play’n GO takes on the royal court from Alice in Wonderland. This game has a number of features based on concepts and characters from the story. It also looks amazing and has a great aesthetic appeal.

Casinos with Court of Hearts

An Introduction to Court of Hearts

Play’n GO has a tremendous reputation for putting together games that look great. They also have a big reputation for their slots having tons of in-depth features. Both of these elements come together for the Court of Hearts online slot.

As a result, you get a great mix of both solid graphics and stellar gameplay.

This is the type of mix that players want to see. However, the first thing they’ll put their eyes on is the symbol set and background. Much of the symbol set looks like elaborate wood carvings that have been painted. That’s a graphical style you rarely see, and it looks amazing here. The background has a similar feel to it in terms of graphical style. However, it includes several other characters holding court in front of the Queen of Hearts.

On the gameplay end of the situation, players have some great features and a solid pay table. Lots of wins happen in lots of ways in this game, and that’s the kind of thing that most players love. The balance between the pay table and the feature set is an important element considering how relatively few paylines there are in this title as well.

The layout for this title is really straightforward. It’s also super easy to jump into and get started with. Here’s what to expect:

With a game with this style of format, the features and pay table determine the volatility. Overall, the volatility of this game is definitely below average. We would put it on the upper end of the low category as a whole. We’ll get into how to adjust to this volatility down below.

Additionally, understand that wins in this game are described based on multiples of the total bet. If you want to know what the wins are based on line bet wagers, just multiply these numbers by 10.

On the gameplay end of things, the features are pretty serious. They drive the majority of the gameplay experience. However, the regular pay table offers some pretty solid value as well. This allows the two to work hand in hand to give you lots of ways to get paid. That is a key part of the experience of the Court of Hearts online slot.

Before we get into specific features, there’s one thing we want to point out. It’s possible for the rabbit to randomly appear and give two extra scatters. That can happen at random on any given spin. No combinations or specific symbols are required to trigger it.

With that said, let’s look at the other features.

There are three different wilds in this game, and two of them are centered around features. You’ll have the purple cat, which always covers the entire reel. You’ll also have the gold and red heart symbol. Finally, there’s the Queen of Hearts herself, who is only wild during the free spins feature.

In any event, all of these wilds can come together to create winning combinations for the following payouts:

An important feature that triggers often is the avalanche feature. If any scatter appears, or if you get a win of any kind, the involved symbols disappear. The scatters are collected at the top of the game board. However, new symbols fall down into the places left behind.

This gives the ability to pick up lots of individual wins on the same paid spin. Additionally, you can think of these as a type of free re-spin. Since you see it so often, the value you get from this feature really adds up during your sessions.

If you see the Rabbit Hole Bonus symbol show up anywhere on the board, it’ll award one of three different available wild-based features. These features help to give you chances at lots of additional ways to win.

We really like how the Court of Hearts video slot offers so much variety with its features like what we see here.

The gold and purple clock is the scatter. When you get them on the reels, they are collected at the top of the screen. Picking up three gives you a 5x instant win and a set of nine free spins. Note that additional scatters give another 5x win each. However, they do not add more free spins.

Every time you get a win in this feature, the multiplier increases by one on your payouts. In addition, the Queen of Hearts is a wild symbol during this feature. You cannot re-trigger the free spins; the scatters pay 5x each instead.

How to Win at Court of Hearts

With the volatility of this game being so much on the low side, a simple adjustment is called for. If you increase your bet size somewhat, you’ll get better payouts with swings that are still reasonable. You’re always free to bet what you want, of course, but this is the common adjustment for low-volatility slots.

Payout Structure for Court of Hearts

There are four characters in this game that make up the high-tier symbols. The Queen of Hearts in red pays 20x for five. You can earn 8x for five of the man in blue as well. The mad hatter in green is worth 6x for five. Additionally, five of the rabbit in yellow gets you a 4x payout.

The lower-tier symbols are gorgeous wood carving symbols. They are the four card suits in different colors. The blue spade and red heart get you 1.2x and 1.1x for five, respectively. At the bottom of the pay table, both the gold diamond and the green club pay 1x for five of a kind combinations.

We really enjoy how the presentation of the Court of Hearts online slot gives people an overwhelmingly intense gameplay experience as opposed to only being an unimportant detail. Also worth noting, because of the large appeal to so many people, this game has a strong place in this developer’s offering of titles as a whole.

Additionally, the gameplay style with this title gives a very serious degree of fun. If you’ve enjoyed playing other video slots that use this style of concept, then this is a video slot you definitely will not want to miss out on, and the set of features offers a number of various extra ways to win prizes alongside the regular pay table.